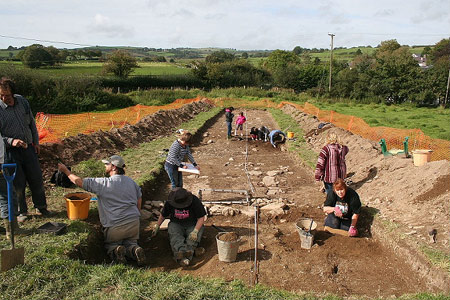 Capel y Groes, Swyddfynnon, Ceredigion, is the site of a possible medieval chapel, part of the administrative centre of Strata Florida’s grange of Mefenydd. The site was investigated in 2010 by Dyfed Archaeological Trust and School of Archaeology, History and Anthropology, University of Wales, Trinity St David.

The excavation consisted of a single trench located on the site of Capel y Groes, as depicted on the 19th century maps. It revealed the remains of a mortared stone, and possible part-timber, built building. Associated finds dated the building to between the 17th and 19th century, with the concentration of activity within the late 18th and 19th century. It seemed to be a domestic building, and no trace of the medieval chapel was discovered.

General view of the excavation at Capel y Groes