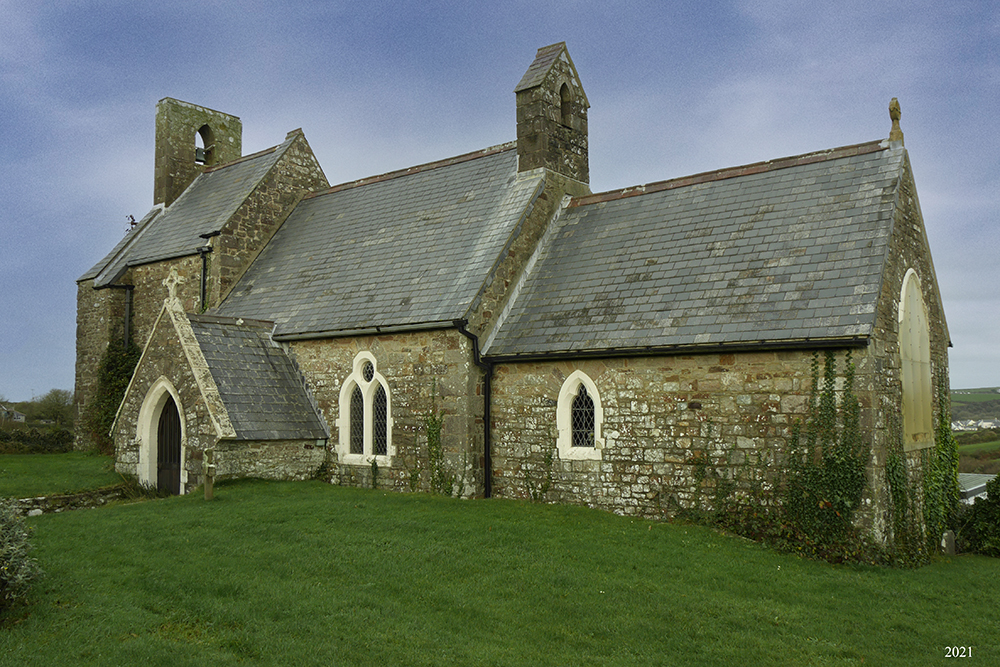 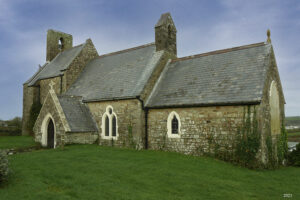 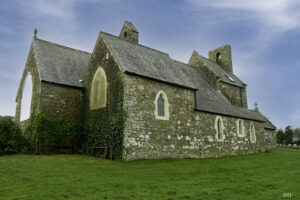 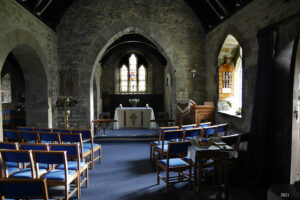 Reason for Listing: Retains its medieval plan and substantial fabric including the vaulted base of the tower, together with ancient font and inscribed stone. This church has a remarkable appearance due to the additions made in the C19.

The present church consists of a 2-bayed chancel, a wider 2-bayed nave, a single bayed north chapel north of the chancel west bay, a 2-bayed lean-to north aisle, a 2-storey ‘saddleback’ west tower, and a gabled vestry north of the tower, in the angle with the north aisle. Construction is in medium-large limestone rubble throughout, unsquared and uncoursed, much refaced in 1854 and with ashlar quoining. Good external mortar pointing, 1907; later 20th century internal incised pointing, no internal render/plaster. Roofs are slated gables, the always nave roofed at a higher level; the north aisle roof is a slated lean-to.

The chancel east bay north wall features a blocked window with a 2-centred outer arch; the surround was described in 1851 as a single, square trefoil-headed light of late medieval date (Glynne, 1885, 219) but has since been robbed-out. The east window is of 3 plain-cusped lancets beneath a 2-centred outer arch and (rebuilt) drip-mould, all in oolite and from 1854. The south window is also from 1854 and is a single, cusped oolite lancet. The west bay communicates with the 1854 north chapel through a segmental arch also of 1854; a ‘sunken’ stone in the arch between the chancel and north chapel may mark the site of the rood-loft stair (Davies, n.d., 6). The plain chancel arch dates from 1854. Externally, the gable above carries a single, gabled sanctus bellcote, an 1854 rebuild of an earlier (medieval?) structure; there is no bell. The chancel roof may be from after 1854, and has arch-braced oak collar-rafter trusses with cusped queen-posts forming trefoils and quatrefoils, of ‘Arts & Crafts’ appearance. There is no weather tabling. The east bay floor is polychrome tiled, again post-1854?; the west bay floor was probably raised in 1995.

The main entry has always been in the nave south wall; the door was rebuilt in 1854 with a 2-centred surround. A window lies either side of the door, in the same location as the 18th century sashes (see below); the present windows are of 1854 and are oolite double-lancets with plain pierced spandrels. The arcade into the north aisle comprises 2 arches similar to the chancel arch, and also from 1854. The nave is roofed as the chancel. The suspended floor was renovated in 1995, when the pews were removed (Rev. B. O’Malley, Walton West, pers. comm.); the flags may be re-used from the pre-restoration church.

At the west end of the nave lies the west tower, in which more early features survive than elsewhere. It is entered from the nave through a plain 2-centred arch that is rather low, suggesting a possible earlier 15th century date. The tower fabric is in larger rubble, finished as the rest of the church and without internal plaster. A square spiral stair turret projects slightly from the south-west corner, and is entered through a very low, square-headed doorway. a segmental arch in the west wall marks the site of a medieval window (see below), but a new window was inserted in 1854 at a lower level, of 2 ?reused cusped lancets; the present window interrupts the segmental head of a blocked doorway of medieval date, probably blocked before 1851 (see below). The floor is flagged as the nave, and appears to have been raised. The ground floor has a 2-centred barrel-vault of medieval date; with the spiral stair it suggests that the tower was intended to rise higher, but was not completed; the tower appears finished at its present height, rather than having been truncated. The second, belfry stage is gabled, with upstands; the western upstand carries a large, gabled single bellcote, rebuilt in 1854 in limestone ashlar on the site of an earlier (double?) bellcote. A bell is present (see below). A blocked window lies beneath the bellcote with a 2-centred, cusped oolite surround of 15th century date, and possibly blocked in 1854. A small female effigy, of 15th-16th century date, lies not in situ beneath the tower west window.

The north aisle features 3 lancets in the north wall; 2 are plain-cusped, and very late medieval in character, while the westernmost is uncusped with a higher sill. These would appear to be the windows shown in a plan of c.1780, but apparently gone without trace by 1851 (see below). The aisle lean-to roof continues the nave roof northern slope, with softwood principals strutted from wall corbels, all 1854.

The north chapel was built new in 1854 for the Lort-Phillips family and their guests who had a hunting-lodge nearby (Davies, n.d., 13); there is an arch into the north aisle like the chancel arch, and an east window like the nave windows. It has a gabled roof rising above the north aisle lean-to, of collared softwood common rafters from 1854, and is floored as the chancel west bay. The south porch was similarly new built in 1854, with a 2-centred doorway and moulded drip-mould on ‘Acanthus’ stops. The gabled, softwood collar-rafter roof lies behind an upstand with tabling. The floor is flagged as the nave. Also new in 1854 was the vestry. It has a west window like those in the nave, and a gable roof like that of the north chapel, rising above the north aisle.

A deep cutting surrounds the south-eastern third of the church, concrete-revetted in areas; however, it cuts through yard build-up and footings are not exposed. A shallow concrete drain runs along the vestry west wall. Much of the yard build-up may have been truncated when the church was restored in 1854. The tower and chancel west bay floors have been raised. The nave and aisle floors are suspended; void below. No internal crypt/vault is evident, There is no evidence for former components beyond the present church walls.

The nave may predate the chancel, the shape of the former chancel arch suggesting that a solid wall was pierced when the chancel was added (see below); the nave may then be 13th century and the chancel 14th century, but in the absence of surviving detail close dating is impossible. The main entry was through the nave south wall, but there is a blocked west door in the west tower. The tower may be early; it has a gabled ‘saddleback’ (though possibly intended to rise higher) and may belong to the earlier 15th century. The north aisle is crude, and may be very late medieval – sub-medieval; its ‘debased’ windows may be original and in situ. The north chapel and vestry were built in 1854, when most of the medieval elements of the church were lost.

A plan and south view of the 18th century church are displayed in the neighbouring church at Talbenny; they are anonymous but have been dated to c.1780, and wrongly described as portraying Talbenny church. The basic plan of the church was as at present, but neither a south porch, vestry nor north chapel was present; occupying the site of the latter was a small, very narrow projection from the aisle. The north aisle arcade is depicted with 3 bays, possibly a mistake since only 2 were present in 1851 (see below). The south door lay in its present position, and is shown with a rounded 2-centred surround of convincing medieval appearance, a square sash window lay either side of the door in the nave south wall. A further, very small square window sat high in the south wall of the chancel west bay. The only other windows shown on the plan are an east window, and 3 windows in the north aisle north wall. The tower was gabled as at present, and the west door may still have been open. Both the present bellcotes  were present, but the western bellcote is shown as a double bellcote with 2-centred openings. A possible chimney is shown on the tower west gable. In 1833 the church was described as ‘not entitled to architectural notice’ (Lewis, 1833).

A description from 1851 (Glynne, 1885, 219) complements the above pictorial evidence and the plan was unchanged; however, there are certain differences. The chancel masonry was varied and ‘evidently of different ages’; its north wall window was blocked as at present, but the surround was still in place (see above).  The rest of the windows were all ‘bad and modern’, as in c.1780. There was a blind or blocked arch beneath the east window, and a small, crude piscina. The chancel south wall featured internal masonry benching. The small chancel arch was a crude breach of a formerly solid wall, suggesting that the chancel was probably secondary to the nave, and ‘strangely mis-shapen’, with ‘much dead wall about’. A very large squint with a ‘straight-sided arch’ lay to the north of the chancel arch. The arcade into the north aisle was of 2 bays, as at present, but with very low, depressed arches of dissimilar profile, on a plain pier. The 3 north aisle windows shown in c.1780 had evidently been blocked, for it is stated that ‘the aisle seems never to have had any windows’. Similar benching to that in the chancel occupied the base of the aisle west wall. The tower is described as at present, with a ‘double window with obtuse heads’, possibly the present window opening; the west door is not mentioned and may have already been blocked. Both bellcotes are mentioned. The church interior was ‘dilapidated to an incredible degree’, and much of the external walling lay beneath yard build-up.

The 1854 restoration (Davies, n.d., 13), to the designs of the architect R. Kyrke Penson (Cadw, 1997, 5),  was high impact; it has been seen that with the exception of the west tower, the church was practically rebuilt (much of it at least refaced) and new components built.

There has been some further work. The chancel and nave roofs have an ‘Arts & Crafts’ appearance and may be post-1854, possibly dating to 1888 when the chancel was refloored (Cadw, 1997, 5). The altar table and rail, and pulpit, are from c.1900. The church was repointed, and the interior replastered, in 1907 (Pembs. R. O., HPR/53/29), but the extent of removal of the old plaster is not known. The internal plaster was removed later in the 20th century and the internal walls were pointed. The north chapel underwent superficial conversion into a Lady Chapel in 1978 (Pembs. R. O., HPR/53/17), when the rubble altar table was built and the reredos that had been installed in the chancel in 1882 (Davies, n.d., 9), was moved to the chapel. The chancel floor is raised; this may have been in 1995 when the church was renovated, including the nave floor, and the pews were removed (Rev. B. O’Malley, pers. comm.).

The limestone font is medieval, with a square scalloped bowl, cylindrical stem and square base, of probable 12th century date.

Two medieval figurative mouldings have been re-used in the present church fabric; the north aisle incorporates a moulded bell, and a female head, both of medieval date (Davies, n.d., 3).

There is one bell in the western bellcote.

Walton West Church was a parish church in the post-conquest period (Rees, 1932), of the medieval Deanery of Rhos. The rectory appears to have been in private patronage, at least since 1536 (Green, 1914, 233); Rees, 1932, has the church appendent to an unnamed monastic house in the 14th century.

Henry Catharne was the patron in 1536 (ibid.), and by 1594 the co-heiresses of his son Thomas had taken the joint patronage with them upon marriage into, inter alia, the Stepney family (ibid.).

In 1998 All Saints, Walton West, was a parish church. The living was a rectory held with Talbenny and Haroldston West (Benefice 578) in the Archdeaconry of St Davids, Rural Deanery of Roose (St Davids, 1997-8). 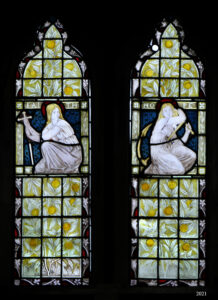 The two figures are of the aesthetic movement in yellow and white on a stylised plant background.

East wall of the Ladies Chapel.

HPR/53/20 – Schedule of inscriptions on gravestones to be removed, n.d.

Cadw, 1997, Buildings of Special Architectural or Historic Interest (The Havens).