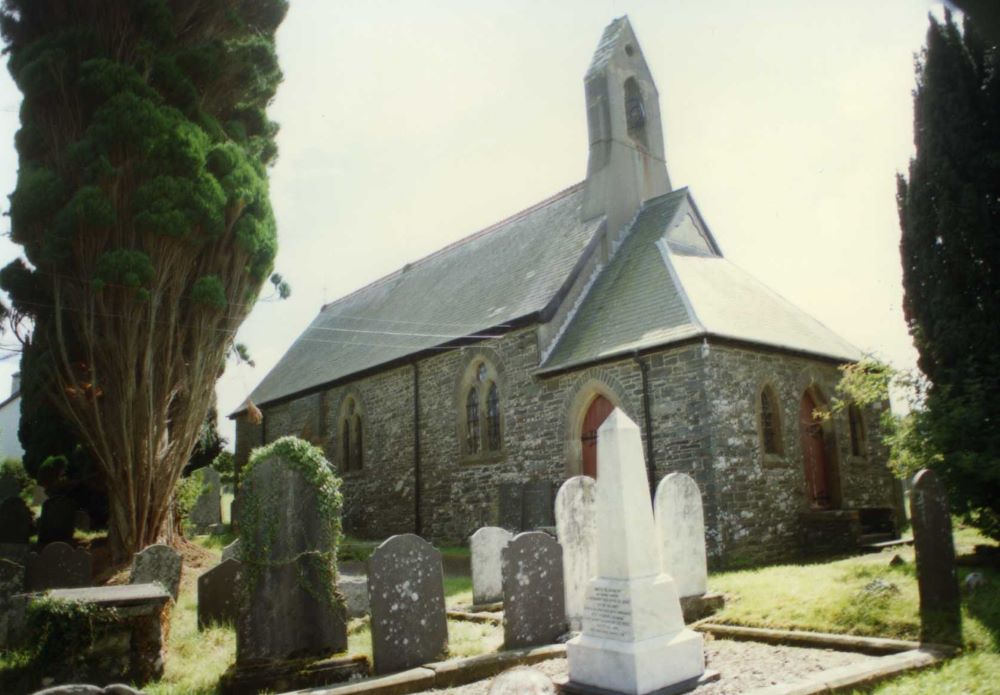 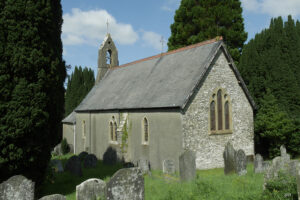 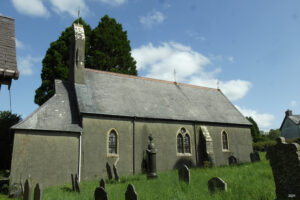 St Michael, Llanfihangel Lledrod, is a single-celled church, of small size. It was apparently (re)built in the early 19th century on the same site, and in the same location as its predecessor (PRN 12434), probably retaining nothing from the earlier fabric. It was heavily restored in 1883.

The present church consists of a 3-bayed chancel/nave without structural division, and a single-bayed extension at the west end, divided into a vestry and porch. Construction is in coursed local rubble throughout. All dressings are in yellow oolite and from 1883; the openings are neo-gothic with 2-centred surrounds, the 1- and 2-light windows being uncusped, with simple tracery. The porch and vestry are divided by an internal wall, the former element being entered through west and north doors. There is a single gabled bellcote at the west end, 1883. The chancel/nave roof is a slated gable; the porch/vestry has a slated, hipped lean-to roof at a slightly lower level.

The earlier church was described by Lewis, 1833, as ‘a small plain building, consisting only of a nave’; it had ‘recently received an addition of 280 sittings’. It is shown as a plain rectangular structure on the tithe map of 1844 (NLW, Llanfihangel Lledrod, 1844) and was presumably unchanged in 1883 when it was illustrated for the faculty application for its restoration (NLW, SD/F/465). The drawings show a single cell corresponding to the present chancel/nave, of apparent early 19th century construction, with an east window, 1 window in the north wall and 2 in the south, all 2-centred, single-light, neo-gothic and with timber ‘Y’-tracery. The re was a north door with a similar opening., and a gabled western single bellcote. Inside was a west gallery.

The church was in a very ‘indifferent state of repair’ in 1878 (Anon., 1878, 350) and was restored in 1883 to the designs of the architect A. Ritchie, of Chester (NLW, SD/F/465). The vestry/porch was added at the west end. Much of the church may have been rebuilt or at least refaced. The earlier windows and door were blocked and the present ones inserted, and the buttresses added. The bellcote was rebuilt. The church was reroofed, and refloored with an underground heating chamber for a ‘Porritt’s’ stove; the interior was reseated.

The font is from 1883. The original font now lies loose in the north porch, and has a square bowl and cylindrical stem of 12th -13th century date, but in 1914 its component parts formed a decorative feature of the archway over the churchyard entrance (Evans, 1914, 9).

There is an external earth cutting, from before 1883 (NLW, SD/F/465), along the eastern half of the north south wall; it becomes medium-depth along the east wall, and deeper along the south wall. There is an underground heating chamber, and floors are suspended above heating ducts except in the porch.

St Michael, Llanfihangel Lledrod, was a parish church during the medieval period (Rees, 1932), of the medieval Deanery of Ultra-Aeron. The patronage is unknown.

In 1833 the living was a perpetual curacy in the Archdeaconry of Cardigan, endowed with £10 per annum, £200 private benefaction, £600 royal bounty and £900 parliamentary grant (Lewis, 1833); it was in the patronage of the incumbent.

In 1998 St Michael, Llanfihangel Lledrod, was a parish church. The living was a vicarage, held with Llanilar, Rhostie and Llangwyryfon (Benefice no. 614) in the Archdeaconry of Cardigan, Rural Deanery of Llanbadarn Fawr (St Davids, 1997-8).

The cult of St Michael has pre-conquest origins within Ceredigion; however, the Lledrod dedication may be later (Various, 1994, 393).