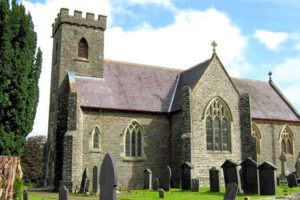 Reason for Listing: Not recorded.

St David, Capel Dewi, is a multicelled church, of small-medium size. It was entirely (re)built in 1835 on the same site, and probably in the same location as its predecessor, which in turn was (re)built before 1813 on the site of a ruined medieval church; nothing was retained from any of the earlier fabric.

The present church consists of a 4-bayed chancel/nave without structural division, single-bayed north and south transepts, a 3-storeyed west tower (partly within the nave) and a single-bayed vestry north of the east bays. Construction is in limestone rubble throughout. The west tower has simple dressings, uncusped and untraceried, and a corbelled, crenellated parapet, all from 1835; 1- and 2-light nave windows with ‘Y’ tracery, 1835; external angle buttressing throughout, 1835; other windows are in yellow oolite and from 1886; the 2-centred openings are neo-gothic and the 3-light windows are cusped, with simple or complex Perpendicular tracery. The roofs are slated gables; the vestry has a slated lean-to roof while the tower has a slated pyramidal roof. The floors are suspended.

The earlier church was described by Lewis, 1833, as ‘in ruins’ and it may have become disused very early in the post-medieval period, not being shown on Blaeu’s map of Cardiganshire of c.1600

The site, and probably the location of the medieval church was re-used when a new church was constructed before 1813; nothing is known of this building.

It was apparently ‘ruinous’ in 1870 (Clive-Powell, 1995, 1) and the church was extensively restored in 1886, to the designs of the architects Middleton, Prothero and Phillott of Cheltenham (Cadw, 1996, 12); the work included the construction of the vestry, and the refenestration of much of the church (in the 1835 openings?). The church was reroofed and refloored.

There has been no major subsequent alteration but the tower was reroofed 1985-90 (ibid.) and there has been extensive later 20th century repointing.

The font is 19th century. The fittings are mainly early 20th century including pews from the 1930s (ibid.).

There is no physical evidence for the earlier church. There is neither an external cutting nor a drain. Floors are suspended over a void. External memorials lie significantly close to all walls.

St David, Capel Dewi, occupies the site of one of the seven medieval chapels-of-ease to Llandysul parish (Hughes, Howells and John, 1978, 7; Rees, 1932). The chapel may have become disused very early in the post-medieval period; it is not shown on Blaeu’s map of Cardiganshire of c.1600 and was ‘in ruins’ in 1833 (Lewis, 1833).

In 1998 St David, Capel Dewi, was a chapel within the ecclesiastical parish of Llandysul but had been united with Llanfihangel-ar-arth (Benefice no. 188) in the Archdeaconry of Cardigan, Rural Deanery of Cardigan (St Davids, 1997-8).