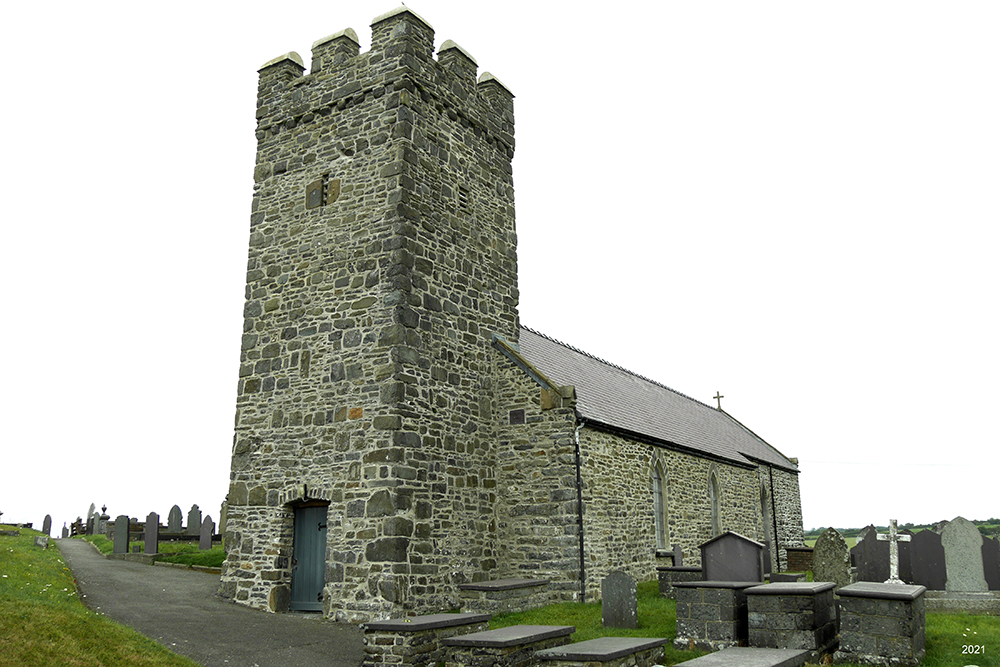 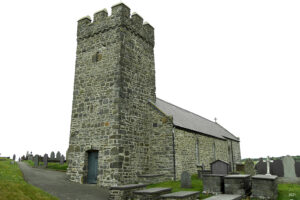 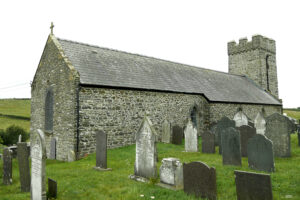 Reasons for Listing: Included primarily for medieval tower, one of about eight in Ceredigion.

Archaeological potential – good. No external drain or cutting around the church; suspended floors over ?below-ground void in ?80% of church; external memorials close to 100% of church.

The present church consists of a 2-bayed chancel roofed as one with the 3-bayed nave, and a 3-storey west tower. Construction is in limestone and shale rubble throughout. The external pointing is generally good and is later 20th century, the south walls lying beneath 20th century roughcast; the interior is plastered except in the west tower. Roofs are slated gables; the west tower has a flat roof.

The chancel east wall preserves its 1860-62 roof-line below an upstand possibly from 1931. The east window is a simple 2-centred opening without a surround, from 1860-62. There are no windows in the chancel side walls but there is a plain doorway in the south wall from 1860-62. The plain 2-centred chancel arch is also from 1860-62. The softwood roof is from 1931; all rafters have collars, arch-braced from wall corbels, and king- and princess-posts.  The boarded floor is probably from 1883; there may be an underfloor void.

The nave east bay is the same width as the chancel, the 2 west bays being wider. There is a window in both side walls in all three bays, all like the east window and from 1860-62. The west wall exhibits a datestone from the 1860-62 rebuild. The roof continues that in the chancel. The passages and floors are boarded and suspended.

The medieval west tower is not typical of the region, having no external batter or a projecting stair turret; it may be early – later 14th century?. It comprises 3 storeys. The barrel-vaulted ground floor contains the west door to the church which has a segmental medieval head; the entry into the nave is a simple square opening rebuilt in 1860-62. The spiral stair is entered from the nave through a simple, square ?medieval doorway and ascends the north wall as a squinch. The flagged floor may be from 1860-62. The second storey is blind. The third storey features a simple slit light in the north wall and a simple square opening in the south wall; the crenellated parapet lies on an external corbel table.

There is neither an external drain nor cutting around the church. The nave (and chancel?) floor is  suspended over an underfloor void which may be below ground level, lowered in 1860-62?. External memorials lie close to all walls.

The west tower may be late 14th century. The remainder of the church is from 1860-62 but may follow the plan of the earlier structure; there is no evidence for any further former components.

Reasons for Listing: Included primarily for medieval tower, one of about eight in Ceredigion.

During the 1860-62 rebuild 6 ECMs were uncovered, apparently lying within the fabric of the medieval walls. Two display knotwork decoration, one of them also having a Latin inscription, possibly of 9th century date. A hogback stone from the 10th – 11th century was also present (Rhys, 1896, 113-8; Various, 1994, 419). and the three now lie inside the west tower. The other three have since been lost (Downey, 1984, 82).

Documentary sources for the medieval church have the separate PRN 5666.

In 1998 St David, Llanddewi Aberarth, was a parish church. The living was a vicarage, held with Henfynyw and Aberaeron (Benefice 574) in the Archdeaconry of Cardigan, Rural Deanery of Glyn Aeron (St Davids, 1997-8).