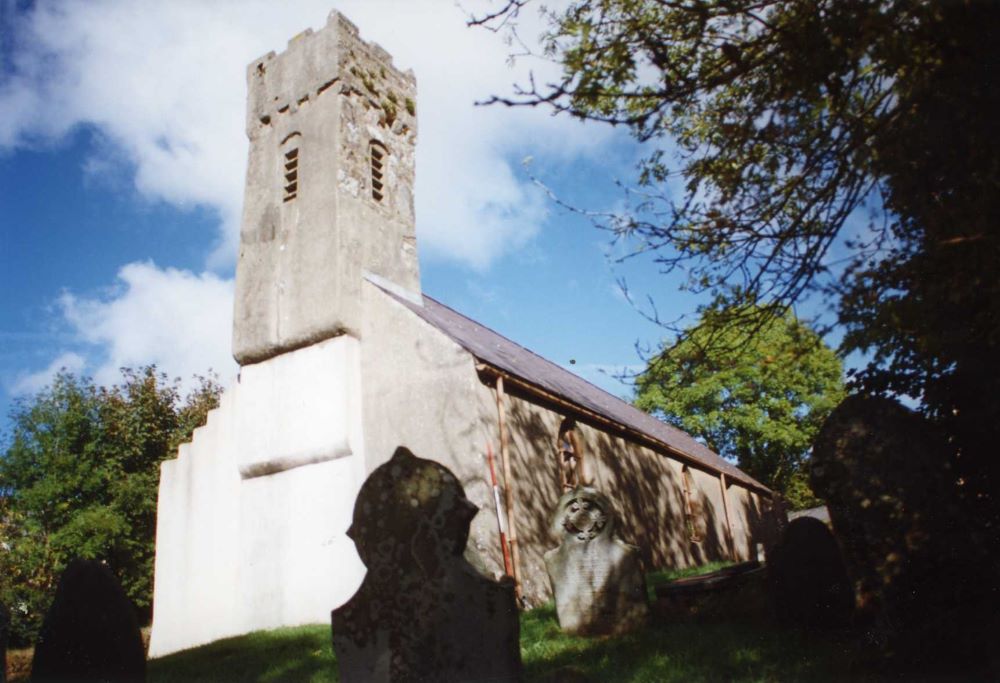 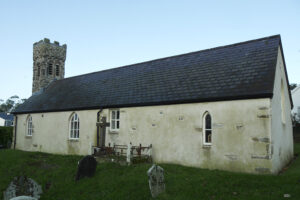 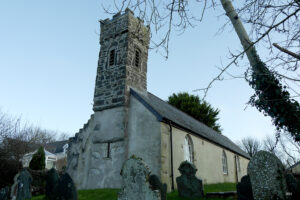 Reasons for Listing: Listed as a mediaeval Church of which the bulk of the masonry probably survives, and for a bellcote in tower style, an unusual example of probably C18 pre-ecclesiological restoration.

The present church consists of a single-bayed chancel, a 2-bayed nave, and a north porch. Former north chapel?. Construction is in limestone and Old Red Sandstone rubble. The east, west and south walls are rendered externally, 20th century; the interior is plastered. The chancel arch may be medieval; the crenellated western bell-turret is also medieval; there is a blocked medieval door and ?window. All other openings are 19th century, the windows single-light, some neo-gothic, all with timber frames. The chancel and nave have a continuous slated gable roof; the turret roof was not seen.

The chancel and nave are the same width with a continuous roof line. There are 2-centred, single light windows in the east and south walls of the chancel, without surrounds and possibly pre-1890; the timber frames may be c.1895. The side walls exhibit internal corbels for former roof-trusses, and an offset high in the south wall suggest that they have been heightened. It has been suggested that the plain, 2-centred chancel arch may be medieval (Thomas, 1964), but this is at odds with a 19th century description (see Structural Development below) suggesting that the arch was rebuilt, and possibly relocated, in c.1895 (Cadw, 1996, 1). The softwood collar-rafter roof may be from c.1895, and is matchboarded above. The quarry-tiled floor, over a void?, may also be c.1895.

The nave side walls have a considerable external batter and exhibit evidence of heightening like the chancel side wall. A vertical scar at the east end of the north wall suggested a north-south wall led off at this point. This wall is pierced by a single-light window with a segmental brick head, pre-1890, with a 4-pane timber frame from c.1895?. To the west may be the internal impression of a blocked lancet window. The south wall is pierced by 3 windows, one with a pre-1890 segmental head, the other 2 being 2-centred like the chancel windows; timber frames as above. A small recess (sconce?) is visible high up on the internal face, date?.  The north door opening is obscured by the porch and cannot be characterised; in the south wall is a blocked, 2-centred doorway of 13th – 14th century date. The west wall is thick and features a square, full-height internal recess with a blocked slit-light. Above this recess, a square bell-turret from c.1500 is offset out from the external face; it is in squared and coursed limestone rubble and is entered through a low, lintelled doorway reached from a flight of steps up the west gable slope. There is a 2-light opening, with segmental heads, in the east face, and similar single light openings in the south and west faces, c.1500 like the crenellated parapet on an external corbel table. The nave is roofed and floored as the chancel.

The plain, small north porch was added c.1895 and is entered through a 2-centred, brick doorway; it has a contemporary simple softwood roof and a quarry-tiled floor from c.1895.

The church stands upon a low, but well-defined rectangular earthwork platform, primary. A shallow, brick-lined drain surrounds the church. There may be no underfloor void. External memorials lie significantly close to the entire church.

The nave and chancel are fundamentally medieval, but not contemporary; the nave walls are battered and there is a joint between the chancel and nave, visible internally. The nave may be earlier. The scar at the east end of the nave north wall suggests that a wall, contemporary with the chancel or nave, was keyed in at this point, the west wall of a former north chapel?. The western bell-turret is from c.1500 and is comparable with the towers at eg. Cosheston and Minwear, S. Pembs. (and the former turret at Llanddewi Velfrey, now gone); the claim that it is an 18th century folly, expressed in Cadw, 1996, 2, appears to be without foundation given its massive form and the internal evidence.

Some, if not all of the present openings appear to be mid-19th century but may be as late as c.1895, when the church apparently underwent some restoration (RCAHM, 1925, 416). The chancel arch was rebuilt, and possibly relocated. The present roofs, floors and window frames, at least, appear to date from this period, and the north porch was probably added.

The font has a circular bowl with a moulded arcade, and a cylindrical stem and base, all 14th century.

East Williamston Church was not a parish church during the post-conquest period (Rees, 1932), but a chapelry of Begelly parish in the medieval Deanery of Pembroke (Green, 1911, 241). It has little recorded history.

In 1998 East Williamston Church was a chapelry of Begelly parish. The living was a vicarage, held with Jeffreyston, Reynalton and Loveston (Benefice 668) in the Archdeaconry of St Davids, Rural Deanery of Narberth (St Davids, 1997-8).

The dedication is unknown, but is occasionally given as St Eleanor or St Elidyr (SPARC, 1996).