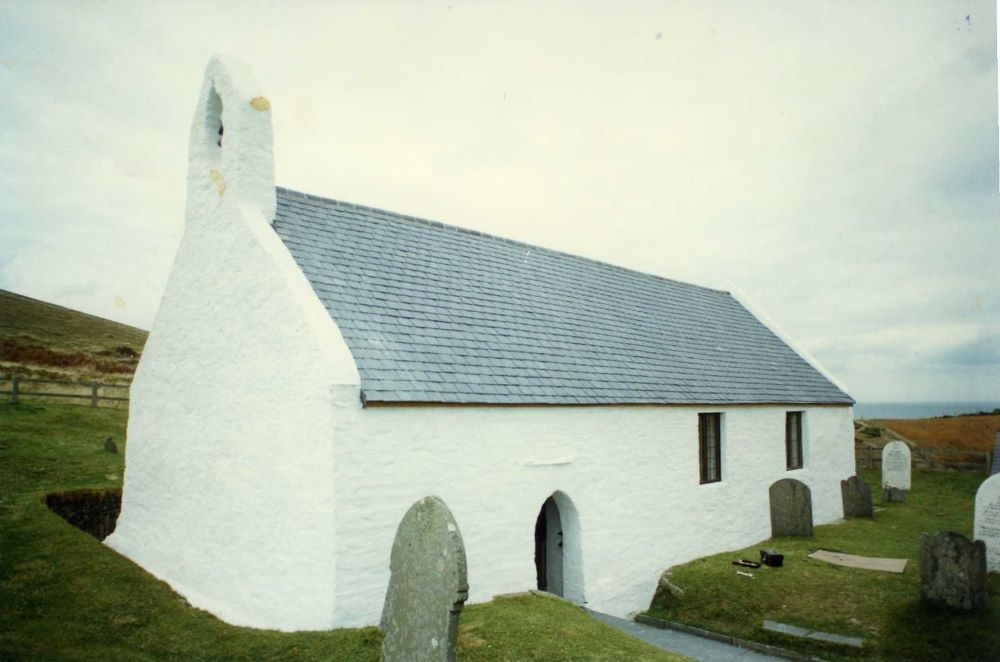 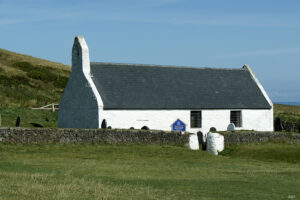 Reason for Listing: Included as a fine example, in an outstanding location, of a C13 Church with a complete and unusual medieval roof.

The present church consists of a 3-bayed chancel/nave, without structural division. Construction is in local rubble. The south door is medieval; windows are from the 16th and the 18th-early 19th centuries. The exterior is limewashed, re-washed in 1996; the interior is plastered, replastered in 1996. The roof is a  slated gable with medieval timbers.

The 2-light east window is cusped, Perpendicular and 16th century. The centre of the external face of the north wall displays a broad, square projection housing a simply vaulted, straight stair to the former rood-loft; both lower and upper doors are square-headed and possibly 14th century (Cf. Llanwnnws and Llanycrwys, Cer.). Either side is a window; both have simple square openings from the 18th – early 19th century and are single light, but with mullioned timber frames replaced in 1996. The south wall has 2 similar windows but the easterly of the two was inserted through the blocking of a medieval chancel south door, blocked in the 1860s. The south door has a plain, 2-centred head, 13th – 14th century, with a weathered straight drip-mould above. The west bay has a low, crude external offset, possibly representing the medieval footings. On the west gable is a simple, gabled single bellcote, with a triangular-headed opening, all medieval. In the internal face of the north wall of the chancel is a square socket that formerly received the end of the medieval rood-beam. The oak roof is 15th-early 16th century, and has cusped, king-post trusses with arch-braces; the purlins may be contemporary. The common rafters and matchboarding are later. The passages are flagged, with woodblock flooring, all from 1853; void below?.

A deep, wide, revetted external cutting surrounds the church, primary but secondarily deepened at the west end exposing footings. The south-west quarter of the church may be built over a bronze age round barrow. The floor was lowered in 1853; void below?. Memorials lie close to the south wall but are separated from the church by the cutting.

The church is medieval, probably 13th-14th century in its present form including the rood stair and bellcote. It was never any larger. There has been little alteration but the chancel south door was blocked in the 1860s (Anon., 1913, 8).

A portion of the former timber rood-screen survived within the building adjacent to the yard in 1913 (Anon., 1913, 8); further sections were revealed when the rood-stair was unblocked in 1917 and lay loose within the church in 1996. The screen featured uprights and carved figurework, possibly pre-Perpendicular (Crossley and Ridgway, 1946, 55).

The floor was lowered in 1853 and the present softwood pews installed (Anon., 1913, 8). The pulpit is 20th century; an 18th-19th century triple-decker pulpit was present in 1913 (ibid.). The softwood vestry screen and reader’s desk are similarly 20th century.

The font has a square, scalloped bowl, a cylindrical stem and a square base, all 12th century.

Reason for Listing: Included as a fine example, in an outstanding location, of a C13 Church with a complete and unusual medieval roof.

Holy Cross, Mwnt, is (remarkably) not shown as a medieval ecclesiastical site by Rees, 1932. However, the church is medieval, of the medieval Deanery of Sub-Aeron, and in 1546 was a free chapel within the parish of Llangoedmor (Jones, 1934, 141).

Mwnt was a parish by 1833 when the living, a perpetual curacy in the patronage of the impropriator of the tithes, was endowed with £1000 royal bounty (Lewis, 1833).

In 1998 Holy Cross, Mwnt, was a parish church. The living was a vicarage, held with Cardigan and Y Ferwig (Benefice 510) in the Archdeaconry of Cardigan, Rural Deanery of Cemais and Sub-Aeron (St Davids, 1997-8).