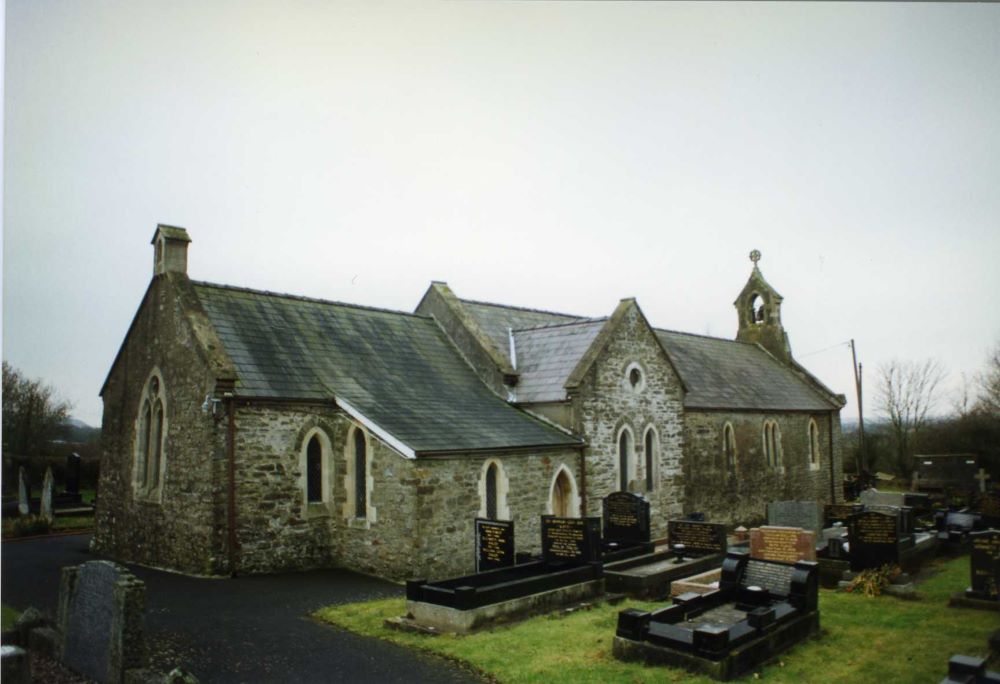 Reason for listing: Listed as a church which, despite thorough C19 restoration, retains medieval fabric and cruciform plan.

Archaeological potential – very good-excellent. Shallow external drain round 100% of church, exposing footings in 20% of church; floor raised in 50% of church; suspended floors in 50% of church with underfloor heating ducts; is no evidence for any below-ground crypt/vault; no external memorials significantly close to the church.

The present church consists of a 2-bayed chancel, a long, 5-bayed nave, single-bayed north and south transepts, a south porch and a single-bayed vestry north of the chancel west bay. Construction is in limestone rubble throughout. The external pointing is from 1907 and is poor in areas; there are remains of earlier pointing/render, and there has been some later repointing. The interior is plastered. Roofs are slated gables; the vestry has a slated lean-to roof.

The chancel walls have a slight batter. The 2-light east window has simple plate tracery and is from 1876, but the opening may be earlier (medieval?); above it is a large finial also from 1876. A plain square aumbry north of the altar may be medieval. The side wall windows are plain single lancets from 1876 although the northern opening may be medieval. The west bay communicates with the vestry through an arch from 1876; in the opposite, south wall is an area of blocking, a former doorway blocked in 1907. The plain chancel arch is also from 1876. The softwood roof is from 1876 and features collar-rafter trusses on wall corbels, matchboarded above. The floor is fully carpeted but may be flagged; it lacks a void.

The nave walls are also slightly battered. The east bay is fully open to the two transepts to roof ridge-level. The side walls are lit by alternate single-  and double-lancet windows, like those in  the chancel from 1876. The south door has a 2-centred surround which may be restored medieval work. The west bay was added in 1907 and the external joint is visible; it is fenestrated like the rest of the nave and has a 3-light traceried west window; a large, elaborately-moulded, gabled single bellcote rises above (not re-used), and there is also an opening into the roof space. The roof is like that in the chancel and also from 1876, extended to the west in 1907. The passages are carpeted but may be flagged above heating flues; the boarded floors are suspended.

The transepts show some ORS in their construction. They are lit by plain double lancets in their end walls, from 1876. Roofs and floors as in the nave.

The lean-to vestry is from 1876 and is entered through a door in the north wall; single lancets lie in the north and east walls. The roof is matchboarded and the floor is quarry-tiled, without an underfloor void?. The south porch is similar and also from 1876; it has a flagged floor laid on the substrate.

There is a shallow external drain all round the church, which exposes footings in areas. The nave floor has been raised. The flooring is suspended in the nave and transepts, and underfloor heating ducts. There is no evidence for any below-ground crypt/vault. No external memorials lie significantly close to the church.

The chancel, nave and transepts are medieval, but cannot be closely dated; the chancel and nave may be 13th  or 14th century and the transepts were probably added during the 15th  or 16th century. The vestry and south porch are from 1876.

The church is said to have been restored by Mason & Elkington, managers of the Copper Works at Burry Port, in c.1850, having been in a ‘deplorable state’ (Thomas, n.d., 18).

The church was restored again in 1876 (Howell Davies, local historian, pers. comm.). The restoration was high impact. The vestry and south porch were added and a simple bellcote was present at the west end by 1898 (Jones, 1937, 69); it may have been erected during this restoration. The church was refenestrated, some earlier openings possibly being used. It was reroofed and refloored, with underfloor heating flues.

The oak altar table is dated 1946. The softwood stalls are free-standing and may be from 1876, as may be the similar pews and wainscot dado in the nave. The oak pulpit is dated 1966. A hot water system was installed around the mid-20th century.

The ?oolite font has an octagonal bowl with a sunk arcade moulding, stem and base, and is late 19th – 20th century.

Llandyry Church was a chapelry of the parish of Penbre during the medieval period (Rees, 1932), of the medieval Deanery of Kidwelly. In 1353 Penbre Church, ‘with its chapels of Llanthdury (Llandyry) and Llancommowr’ was granted to the New College of Leicester (Stephens, 1939, 69). Llandyry remained a chapelry of Penbre within whose vicarage it was valued; in 1833 it was described as a ‘commodious chapel-of-ease, where divine service is performed regularly in the afternoon’; the living of Penbre was in the patronage of the Earl of Ashburnham, endowed with £600 royal bounty and £1400 parliamentary grant (Lewis, 1833). Llandyry was granted burial rights in 1876 when the church was restored.

In 1998 Llandyry Church was a formal chapel-of-ease to Pembrey parish church, which was a vicarage (Benefice no. 219) in the Archdeaconry of Carmarthen, Rural Deanery of Cydweli (St Davids, 1997-8).

The dedication is unknown.