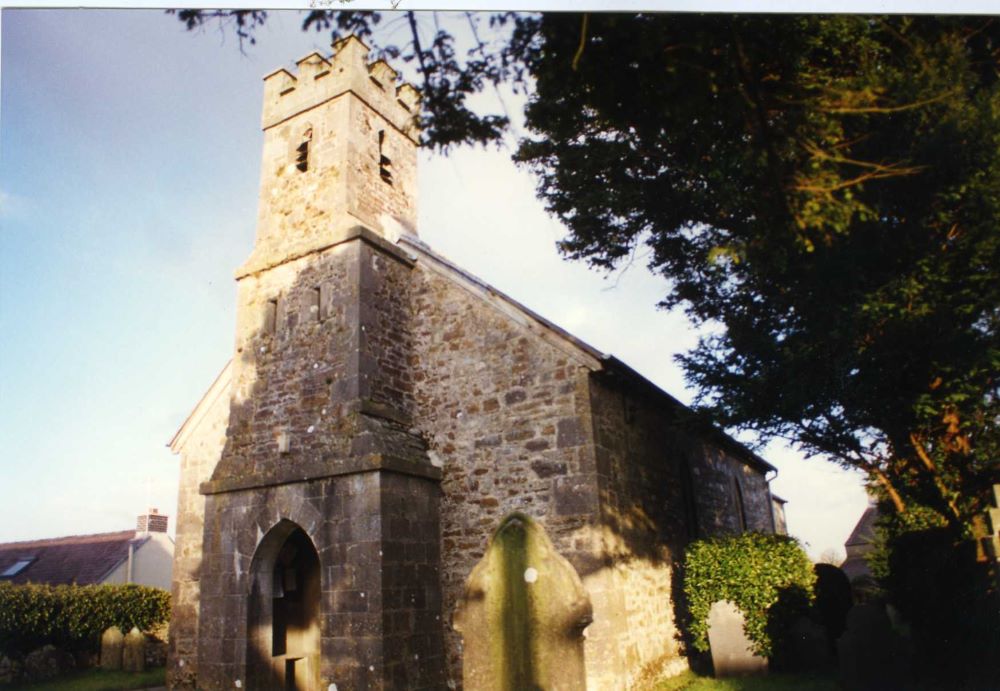 Reasons for Listing: Listed as a simple mediaeval church much restored in the late C19, but retaining some original features.

Archaeological potential – good. Deep wide cutting around 40% of church, primary; shallow external drain around 60% of church; former component beyond 20% of church?; levels lowered in 75% of church exposing footings; suspended floors above a void in 40% of church; few external memorials significantly close to church.

The present church consists of a 3-bayed chancel/nave, without structural division, a single-bayed south transept and a 2-storeyed west tower. Construction is in limestone rubble; the exterior has been extensively, and poorly repointed in the 20th century with some render on the north wall; the interior is plastered. The west tower ground floor is barrel-vaulted, medieval. The tower and south transept arches are medieval, as are some windows; other openings are mainly mid-late 19th century, neo-gothic, with plain limestone dressings. Roofs are slated gables; the tower roof was not seen.

The south transept is entered through a very depressed semicircular arch, chamfered, on ‘corbelled’ impost stones, all late 15th century. It is lit by a double lancet window in the south wall, like the chancel/nave windows and similarly mid-late 19th century. A flight of steps is built into the west wall, leading up to a blocked doorway which can only have led to a parvis over a former south porch. Roofed as the chancel/nave. The floor is fully carpeted, flagged?; there is an underfloor void.

The west tower is not typical of the region , comprising just 2 storeys and lacking an external batter and string-course. It is not tapered. A square spiral stair turret projects from the east half of the north wall, which terminates as a gable below the summit of the belfry stage. The ground floor is entered from the nave through a plain 2-centred arch, from the early 16th century. The low west door has been blocked, and the double-lancet window above, like the rest, is from the mid-late 19th century, but occupying a 16th century embrasure. The 2-centred barrel vault is pierced for bellropes, and early 16th century. The floor is flagged as the chancel/nave, but over a void. The belfry stage has single-light, square-headed openings in all 4 faces, early 16th century, the crenellated parapet lies on an external corbel table, also 16th century.

A wide, deep earth cutting runs around the north and east walls, primary, where the church is built into the hillslope; no corresponding platform. A shallow external drain runs around the remainder of the church. There may be below ground evidence for a possible former south porch. Floor levels have been lowered in the chancel/nave and south transept exposing internal footings. Floors are suspended above a void in the west tower and south transept. Few external memorials lie significantly close to the church.

Vertical offsets at either end of the internal faces of the chancel/nave walls, 1-2m in from the present end walls, may define the original extent of the chancel/nave; 12th – 13th century?, extended in the 13th – 14th century?. The form of the south transept arch suggests a later 15th century date. The west tower was added in the early 16th century. A south porch, with a first floor parvis, may formerly have adjoined the south transept and have been contemporary with it; a plan of 1953 depicts an ‘enclosure’ between the south door and the transept east wall, which may represent footings of a porch that were then still visible (Kay, 1953).

In 1833 the church was in a ‘very dilapidated condition’ (Lewis, 1833). It was restored in the mid-late 19th century, to judge from the window openings, but neither the precise date, nor the architect, is known  (Nicholas, 1995, 3). The restoration was low impact, comprising refenestration, rebuilding the south door, reroofing the nave and transept, and reflooring, reseating and replastering the interior.

There has been little further work beyond repointing.

The softwood pews and tower vestry screen are from the mid-late 19th century. The chancel fittings are later 20th century.

The limestone font has a square bowl and stem, probably 13th century, on a modern base.

At the dissolution, the patronage passed to the crown and then into private hands. In 1833 the living, a perpetual curacy, had recently passes from the patronage of the Rector of Begelly to that of the Bishop of St Davids; it was endowed with £600 royal bounty and £200 parliamentary grant (Lewis, 1833).

In 1998 Reynalton Church was a parish church. The living was a vicarage held with Jeffreyston, Loveston and East Williamston (Benefice 668) in the Archdeaconry of St Davids, Rural Deanery of Narberth (St Davids, 1997-8).