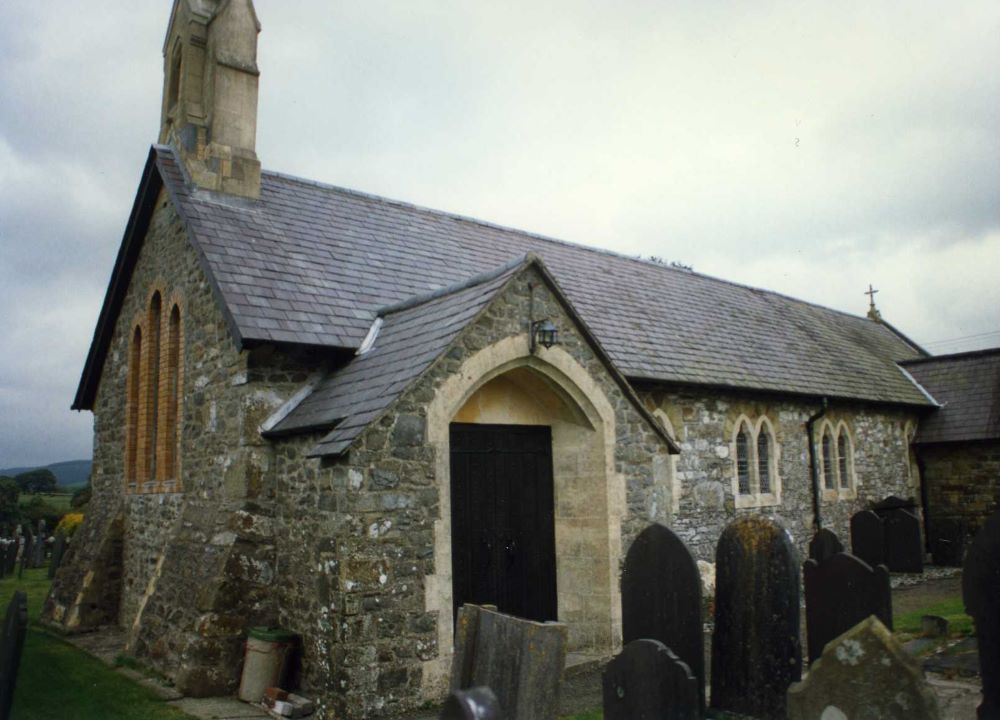 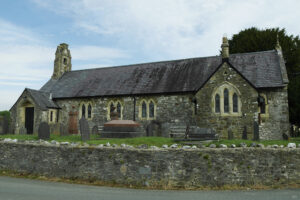 According to Church Heritage Cymru website it is listed Grade II.

SS Celynnin, Ceitho, Gwyn, Gwyno & Gwynoro, Llanpumsaint, is a primarily single-celled church of small size, medieval but partly rebuilt. It consists of chancel/nave of seven bays now roofed as one. However, the nave is on a different alignment to, and slightly wider than the chancel, the north wall dog-legging at the junction, and two building phases may be represented. The chancel arch is a timber dummy inserted in 1882 (NLW SD/F/409), and the west bay and south porch were added during the earlier 20th century, after 1917 (RCAHMW, 1917, 409). Construction is in limestone rubble throughout, with some Old Red Sandstone. Much external work is ribbon pointed in areas, some in cement. All internal walls are rendered/plastered.

It is not possible to closely date the core fabric but a lancet in the east bay north wall has a cusped sandstone head and may be 15th century; it was reopened during the 1882 restoration (NLW SD/F/409). There is no evidence of any further early openings, blocked or otherwise. All openings east of the west bay and south porch are, in their present form, from the 1882 restoration (except the medieval lancet), and have neo-gothic chamfered oolite surrounds in newly-cut embrasures (NLW SD/F/409). The west extension and south porch have been executed in a similar style; in fact, the ashlar bellcote may be a re-use of the 1882 bellcote. The west wall is massively buttressed and the three-light brick window here is a later 20th century replacement. The transeptal vestry was added south of the chancel in 1882; a plain chimney may lead from a heating system flue, now disused (not observed). The present weather tabling and crosses, all in oolite, were added in 1882. All oolite dressings are in poor condition and actively weathering.

The chancel/nave is gable roofed, as one, with a softwood wagon roof of four cants, framed and matchboarded. The visible portion is all 1882 work but the architects’ specifications recommended the old trusses be retained (NLW SD/F/409); it is not known whether this happened. The roof was continued in an identical style into the west bay when it was added. The vestry and south porch are both gabled, and both have softwood collar-rafter roofs, the latter beneath plaster panelling. Slate coverings throughout.

The entire church was refloored in 1882 and raised 0.5m above the ground level; nevertheless, the floor level is still two steps lower than the exterior on the south side. Polychrome tiles were laid in the two east bays, and glazed tiled passages between suspended boarded floors in the remainder; iron wall ventilators lead to the voids beneath, 1882. There is a tiled floor in the vestry, of 1882. The South Porch floor comprises two wide concrete steps laid directly on the substrate.

The pre-restoration church was described by Archdeacon Tenison in his Visitation of 1710 when it was a chapelry of Abergwili parish (Evans, 1912, 67). It needed repairing and the windows glazing, and the Chancel floor was of earth and uneven. To the north of the church (but at an unknown distance – within the yard?) was ‘a little Chappell’, roofless and out of use ‘except for dancing’. The chapel had gone by 1841 (Tithe Map) and no physical evidence for it can now be discerned, but during the 1882 restoration ‘a stone altar slightly raised above the ground on four supports’ stood north of the church (RCAHMW, 1917, 409). The stone was removed to the present altar-table. In 1768 the church was apparently in good repair, glazed, plastered and whitewashed, and the floor ‘plain and even’ (Evans, 1921, 47). By 1783, at least, there was a bell; one was raised that year (Evans, 1912, 67). £4 was spent on flagging ‘the south part of the church’ in 1809; churchwardens’ accounts for the period 1802-1829 record little further expenditure beyond maintenance and it appears that the church did not suffer the frequent Carmarthenshire early 19th century rebuild (Carms. Record Office, CPR/60/9). It appears from the restoration drawings that by 1882 at latest, the church had more-or-less assumed its present form (NLW SD/F/409); there were three or four windows in the south wall but apparently none in the north wall. It was entered via a west door, and a typical (18th century) west gallery was present, reached by external steps and a door in the west wall; all were removed in 1882 (NLW SD/F/409).

The church was restored in 1881-2 by Middleton & Son, Westminster and Cheltenham, when the alterations noted above were made (NLW SD/F/409). The estimated cost was £760 but the restoration practically amounted to a rebuild. In summary, the church was refloored with suspended floors, re-fenestrated, with new embrasures for windows and the old ones blocked (except the medieval lancet which was opened up), the vestry was built, the west wall was almost rebuilt, the west gallery and stairs being removed, and the west door replaced with a new one, the bellcote at the west end was rebuilt, the present wagon roof was installed along with the timber chancel arch, the entire church was reseated, the font was moved, and the church interior replastered. Disturbance was caused by the excavation of 0.2m beneath the church for concrete laying.

The post-1917 early 20th century extension has been described above; neither the exact date nor architect are known. The medium/deep cutting along the north wall, and the buried drain along the south wall may have been excavated at the same time.

The plain octagonal limestone font bowl and cylindrical stem are probably 13th century (Evans, 1912, 67). An incised cross lies in the yard south of the church.

The church was not listed in 1998. According to the entry in Church Heritage Cymru it is Listed Grade II.

Documentary sources for the medieval church have the separate PRN 7407.

There is  some evidence for the pre-conquest religious use of the site:-

SS Celynnin, Ceitho, Gwyn, Gwyno & Gwynoro, Llanpumsaint, was not a parish church during the medieval period but a chapelry of the parish of Abergwili (Rees, 1932), of the medieval Deanery of Carmarthen.

It was still a chapelry in 1710 (Evans, 1912, 67) but had become a parish church by 1833, recently separated by Act of Parliament (Lewis, 1833) when the living was a perpetual curacy in the patronage of the Vicar of Abergwili endowed with £1000 royal bounty.

In 1998 SS Celynnin, Ceitho, Gwyn, Gwyno & Gwynoro, Llanpumsaint, was a parish church. The living was a vicarage, held with Llanllawddog (Benefice no. 682) in the Archdeaconry of Carmarthen, Rural Deanery of Carmarthen (St Davids, 1997-8).