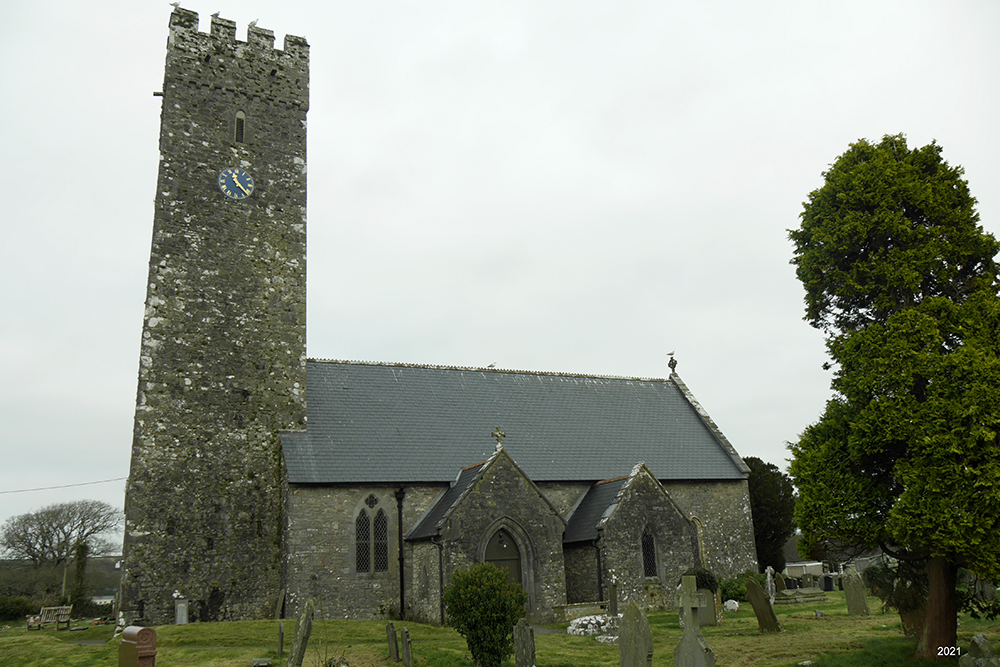 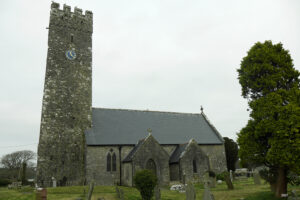 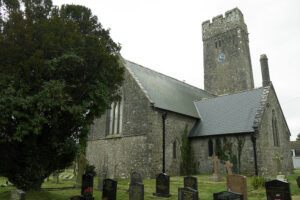 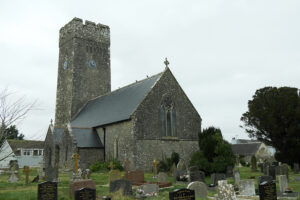 Reasons for Listing: Listed for its origins as a mediaeval church and for fine tower.

The present church is cruciform and consists of a 2-bayed chancel, a 3-bayed nave, a single-bayed north transept, with an internal skew-passage, over a cellar, a single-bayed south transept, a south porch and a 3-storeyed west tower. Construction is in limestone rubble, with some Old Red Sandstone; pointing is mainly from 1870, and the interior is plastered. The tower and porch are barrel-vaulted. The tower has retained some medieval openings, and there are re-used lancets and a reset medieval piscina in the chancel; other openings, including the chancel arch, are from 1870, neo-gothic, with grey oolite dressings. Roofs are slated gables, and the chancel and nave are roofed continuously; the tower roof was not seen.

The chancel walls were largely rebuilt in 1870, and the is a contemporary external string-course on the east wall. The 3-light east window is from 1870 and has cusped ‘Geometric’ tracery in a 2-centred surround and a drip-mould on simple corbel stops. The north and south walls are each pierced by a single lancet with a cusped, roll-moulded surround and plain, 2-centred drip-mould, partly in re-used limestone dressings from the 14th century restored in 1870. Internally, the south wall exhibits a piscina with a 2-centred recess and hood-mould, with cavetto-moulded dressings, and a hexafoil bowl, all from the 14th century but re-used. The north wall of the west bay is pierced by a skew-passage from the north transept, which is contained within the thickness of the wall and has a triangular head; the lower half has been blocked. The chancel arch is from 1870 and has a chamfered inner order on moulded corbels. The softwood roof is from 1870 and has king-post trusses arch-braced from wall corbels and with wind-braces in the slopes. The passage is quarry-tiled, from 1870.

The nave is lit by a 4 windows, 2 in each side wall; all have 2 cusped lights and quatrefoliate spandrels in grey oolite from 1870. The south door has a 2-centred chamfered surround from 1870. The roof is continuous with that in the chancel. The passages are quarry-tiled and feature heating flues and an underground chamber for a ‘Porritt’s’ stove, with suspended board floors over a deep void, all from 1870.

The north transept is entered from the nave through a full-centred semi-circular, three-quarter arch that appears to be an 18th-early 19th century rebuild, from 1826?. The transept was largely rebuilt in the early-mid 19th century and is lit by contemporary windows in all 3 external walls. The east window is a double lancet, the west window is a triple lancet while the north, gable wall features a window like those in the nave. The cellar inserted beneath the transept in the mid 19th century is reached by an external flight of steps along the east wall leading to a simple doorway with a square brick head; it was probably occupied by a heating chamber and the flue from the present heating chamber in the nave rises through the north wall to emerge at the apex as a plain cylindrical chimney, from 1870. The softwood roof lacks trusses, all rafters having scissors-braces from 1870. Floored as the nave. The transept is now used as a chapel.

The small south transept has also been largely rebuilt and is entered through a doorway with a chamfered 2-centred surround from 1870. It is lit by a cusped single lancet in its south wall, from 1870. Roofed as the north transept. The floor is fully carpeted but may be like that in the nave. The transept is now used as a vestry.

The south porch is fundamentally medieval but was heavily restored in 1870 with a doorway featuring a 2-centred, double-chamfered surround and drip-mould. The 2-centred barrel-vault is medieval, while the quarry-tiled floor is from 1870.

The 3-storeyed west tower is not typical of the region, lacking an external string-course and having only a slight external batter; and is rather late, dateable by its belfry openings to the mid-late 16th century. It is slightly tapered. A square spiral stair turret projects from the east half of the north wall, entered through a doorway with a low 2-centred and lit by simple loops. The west door has a Caernarfon-headed surround from 1870 which may or may not occupy an earlier opening; a window, like the chancel east window and similarly from 1870, lies above occupying an earlier embrasure. The 2-centred arch into the nave reflects the profile of the 2-centred barrel vault. Floored as the nave. The second stage is lit by a simple slit lights in the north, south and west walls. The belfry stage has uncusped, 2-light, semicircular-headed openings in the east, west and north walls, and a similar single light in the south wall, from the mid-late 16th century. The tall, crenellated parapet lies on an external corbel table, and features rainwater chutes in the south and west faces.

A shallow, brick-lined drain surrounds the church. A ‘D’-shaped external earthwork lies immediately west of the tower. There is a cellar beneath the north transept. Floors are suspended above a void. There is a below-ground heating chamber in the nave. External memorials lie significantly close to the church.

The chancel contains re-used single lancets from the 14th century and, with the nave and asymmetrical transepts may be 14th century originally, but substantially rebuilt in the 19th century when a cellar was inserted beneath the north transept. The south porch is vaulted and may be a later 14th – 15th century addition. The tower is stylistically dateable to the mid-late 16th century; there is a joint with the nave.

Churchwarden’s accounts of the 1850s mention that the church was reglazed, possibly with some refenestration (Pembs. R. O., HPR/69/13). However, it is apparent that some rebuilding had occurred by 1860, when the Ordnance Survey 1:2500 first edition shows the north transept in its present form, with steps down the cellar which may have housed a heating chamber.

Most of the present openings, however, belong to a restoration undertaken in 1870 when the church was reroofed, refloored and reseated.

There is a clock in the tower, by Smiths of Derby (Bartosch, 1991). The mosaic and tile reredos may be from 1870, like the softwood stalls, pews and pulpit. The altar fittings in the north transept are 20th century.

The oolite font has a square, scalloped bowl with floral mouldings, a cylindrical stem with a cable-moulding and a square base, possibly all from the 13th century.

SS Faith and Tyfei, Lamphey, was a parish church during the post-conquest period (Rees, 1932), of the medieval Deanery of Pembroke. It was appendent to the Manor of Lamphey (Green, 1912, 220) which was an episcopal holding of St Davids by the later 11th century at least. When the manor was transferred to the crown in the 16th century, the patronage was retained by the Bishop (ibid.).

In 1998 SS Faith and Tyfei, Lamphey, was a parish church. The living was a vicarage, held with Hodgeston and Carew (Benefice 811) in the Archdeaconry of St Davids, Rural Deanery of Castlemartin (St Davids, 1997-8).

The church is probably correctly dedicated to St Tyfei, of whose name Faith is doubtless an Anglicisation.