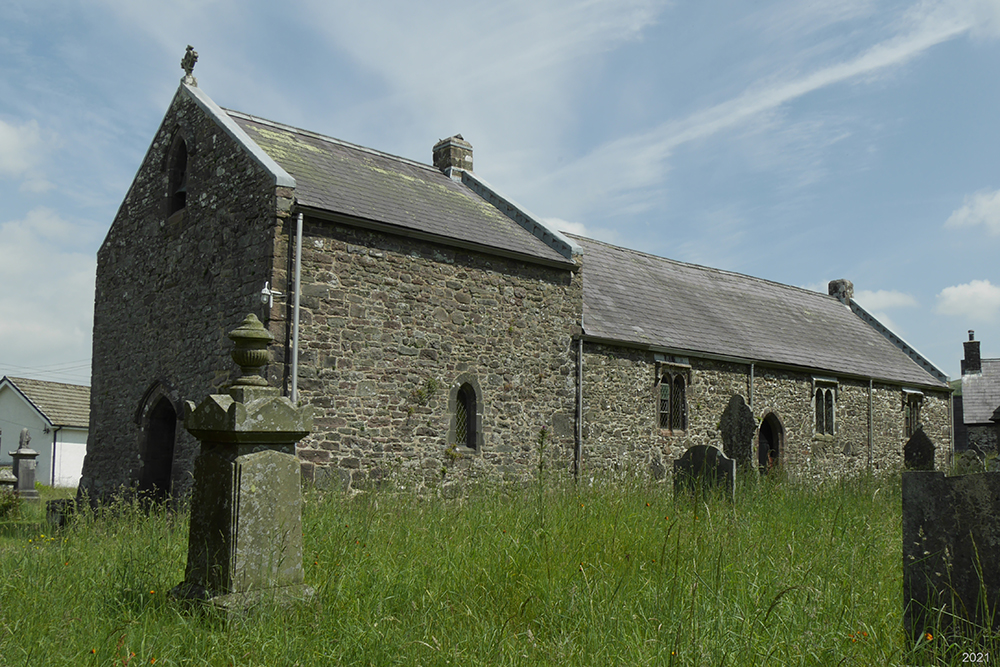 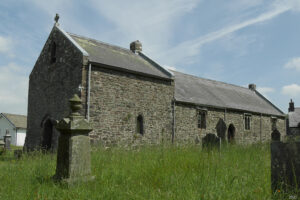 Reason for Listing: Graded II* as a largely late medieval church, notable for its fine panelled roofs and arcade.

The present church consists of a 4-bayed chancel/nave without structural division, a 4-bayed south aisle of the same dimensions, and a west porch/bell turret of 2 storeys against the south aisle west wall. Construction is in medium-sized limestone rubble with some Old Red Sandstone, unsquared and uncoursed, partly with medieval quoining. Extensive areas of external pre-1885 render survive, but the church was repointed in 1913-14, with 1987-88 ribbon-pointing over, while the interior was also roughcast in 1987-88. Slated gable roofs, the chancel and nave probably always roofed continuously; the south aisle roof lies at the same level. The roofs are of late medieval date (see below); flooring is largely from 1885.

The arcade separating the two cells can be dated to c.1500 century on stylistic grounds, its 2-centred arches on octagonal piers without bases or capitals. The east windows of both the chancel/nave and the south aisle have 3 2-centred lights in square limestone surrounds and drip-moulds, from the 16th century; the gables were rebuilt to receive them. A similar, 2-light window occupies the chancel/nave east bay north wall, and the south aisle east bay south wall. The outline of a blocked window head may be preserved in the south aisle south wall. The south aisle south door has a 2-centred sandstone surround, of possible 14th century date (though possibly later). A blocked door in the ‘nave’ north wall has a rounded 2-centred head with a limestone ashlar surround of late-medieval date; it was possibly blocked at the reformation, the blocking lying beneath 18th century render. A simple square recess lies in the south wall of the south aisle east bay, probably representing a piscina, a further indication that it was formerly the chancel. There is a socket (putlog-hole?) in the chancel/nave east wall. All other windows are from 1913-14.

Both cells still have oak wagon-roofs with plain frames and a timber-corbelled wall-plate, of c.1500; the plaster panels have been replaced.

The west porch/bell turret appears to belong to later in the 16th century, but cannot be closely dated. Both the west door, and the archway into the south aisle have been rebuilt, and the side windows are later. The gabled belfry was probably never intended to rise higher but appears to have been finished at this level from the first, as a ‘saddleback’ roof. Its timber floor is a later replacement. A crude stoup of possible 14th century date lay loose in the ground floor in 1917 (RCAHM, 1917, 81).

A medium-deep earth-cut cutting surrounds the church. Floor levels have been raised. A crypt/vault probably lies beneath the ‘chancel’. There is an underfloor void in the ‘nave’ and south aisle. There is a below ground heating chamber in the south aisle, and flues. There is no evidence for former components beyond the present walls.

The northern cell now contains the nave and chancel and has traditionally been regarded as the earlier of the two, dated to the 14th century (Salter, 1984, 32); other authors have attributed both cells to the 15th century (Yates, 1974, 71). However, the construction of the 2 cells is different, the north cell walls being battered externally, and the south aisle fabric being more irregular, and quoined; the external joint between the two, moreover, suggests that the north cell butts against the (earlier) south aisle, which will have been the former site of the chancel.

The church has changed little from its medieval arrangements. It was, unusually for the region, thought necessary to mention that the walls had been cleaned ready to mount the King’s Arms in 1672; the implication is that they were to be painted, along with the Lord’s Prayer and Ten Commandments (Evans, 1919, 211). No mention was made of their uncovering during any of the restorations.

Early 19th century vestry minutes (Carms. R. O., CPR/50/5) note a number of minor repairs, mainly to the ‘steeple’ (bell turret); more than one bell was present. Larger tasks were, however, undertaken. In 1827 the south aisle was tiled (ibid.) and it appears that, by this period at least, the chancel was in the northern half of the church. As in most cases, the church was whitewashed within and without; some external finishes survive, see above. In 1830 the bell turret was subject to extensive work, including rebuilding part of its walls, when the bellframe was raised (ibid.); the belfry displays evidence of having been rebuilt, but the chimney now present appears later. The chancel/nave roof was also extensively repaired. In 1836, the south aisle floor was raised ‘level with the churchyard’ (ibid.). The church was described as ‘not remarkable for any architectural details’ in 1833 (Lewis, 1833).

The church was restored in 1885 (RCAHM, 1917, 81) when the floor level was apparently raised to incorporate heating apparatus (Anon., n.d.). The restoration appears to have been of low-medium impact. The ‘nave’ and south aisle passages were flagged in limestone, possibly re-used. The board floors beneath the stalls may lie on the flags, but the pews lie on suspended woodblock floors. A heating chamber for a ‘Porritt’s’ heating apparatus lies in the south aisle; the flue led beneath the passage to a plain square central chimney on the east wall; the south aisle east bay was made into a vestry with an oolite fireplace ducted into the same chimney. The church was reseated in softwood.

The church was restored again in 1913-14 (RCAHM, 1917, 81; Anon., 1914, 32), but the architect is not known. Again, the restoration was of low-medium impact. It was probably during this restoration that the ‘nave’ and aisle side windows were (re)built, as the existing ‘chancel’ windows but in oolite. The west porch/bell turret openings were also largely rebuilt, including lancets in the ground floor side walls, and the west door with its segmental-headed sandstone surround. It was may have been also now that the ‘chancel’ received its tiled floor, and the altar rail and pulpit. During either this or the 1885 restoration the interior was undoubtedly replastered, following an unknown amount of removal of the existing plaster, but no internal finishes from this period can now be seen.

The font has an octagonal bowl of conglomerate; it is probably 14th century. The octagonal oolite stem and base are 20th century.

SS Simon & Jude, Llanddeusant, was not a parish church during the post-conquest period, but a chapelry of the medieval Deanery of Stradtowy (Rees, 1933) first mentioned in 1282 (Sambrook and Page, 1995 (ii), 45). The benefice appears always to have been annexed to the vicarage of Llangadog (Evans, 1921, 10), which was in the patronage of the Bishops of St Davids, a union which continues into the 1990s.

Llanddeusant had become a parish before 1833 (Lewis, 1833) through a division of Llangadog parish largely engineered by the Moore-Gwynne family (Anon., 1914, 32) which enabled the church to obtain separate endowments.

In 1998 SS Simon & Jude, Llanddeusant, was a parish church. The living was a vicarage, held with Llangadog and Gwynfe (Benefice 634) in the Archdeaconry of Carmarthen, Rural Deanery of Llangadog and Llandeilo (St Davids, 1997-8).

It is probably more correct to associate the church with the cult of St Paulinus, despite the present dedication to SS Simon & Jude (Yates, 1973, 65), who may merely represent a pair of Latin saints with a feast day conveniently close to that of Paulinus (Yates, 1972, 56). However, that the original dedication was to ‘SS Notolius & Potolius’, as has been suggested, is more doubtful.