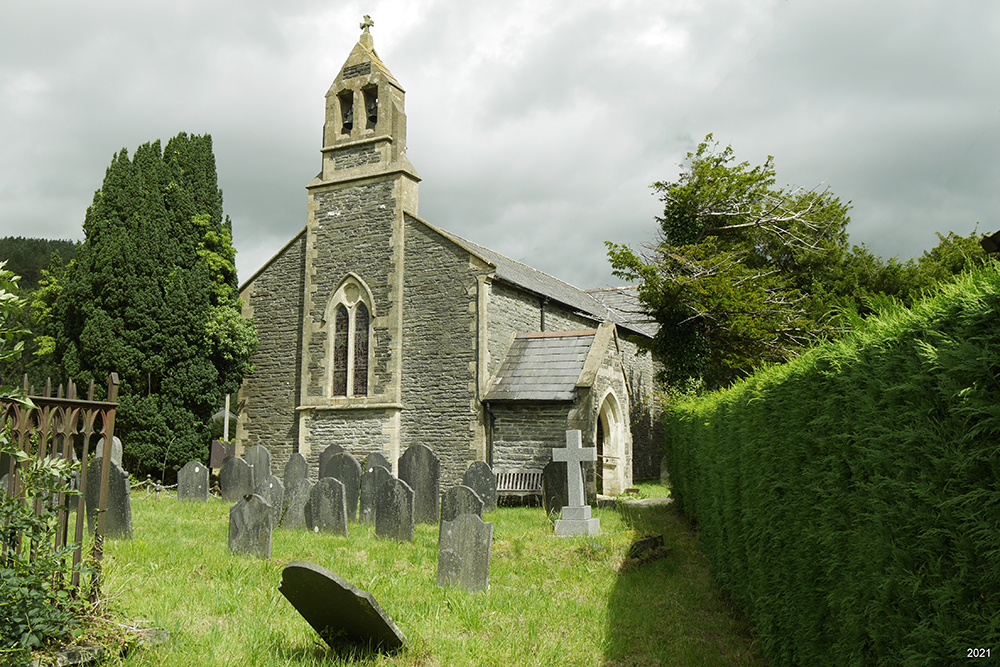 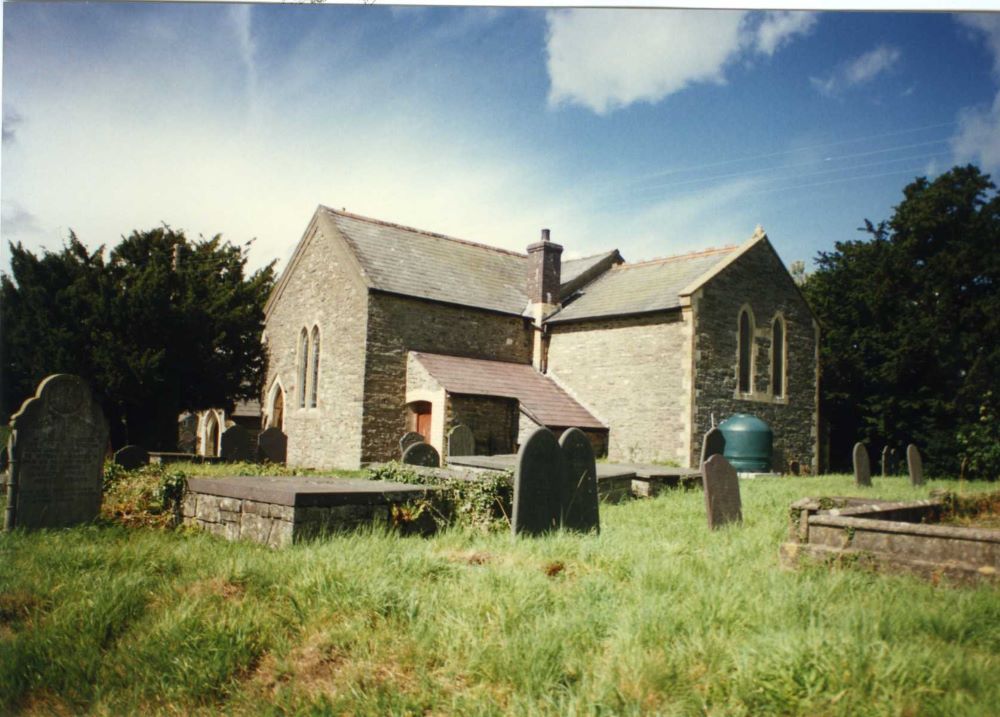 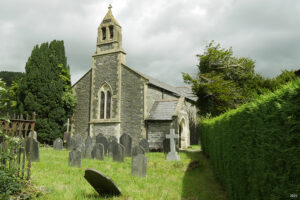 Reason for Listing: Included as a C19 estate church of historical interest for connection with the Earls of Lisburne, and with good font by W Butterfield and East window stained glass.

Archaeological potential – very good. No external cutting or drain; burial vault (former) beneath 20% of church; suspended over heating ducts in 50% of church; few external memorials significantly close to 100% of church.

St Afan, Llanafan-y-Trawscoed, is a multicelled church, of medium size. It was entirely (re)built c.1860 on the same site, and on the foundations of its predecessor, but nothing was retained from the earlier fabric. The boilerhouse was added in the late 19th century.

The present church consists of a single-bayed chancel, a 3-bayed nave, a single-bayed south transept, a south porch, a single-bayed vestry north of the chancel east bay, and a boilerhouse between the transept east wall and the chancel. Construction is in local shale rubble; the boilerhouse is rendered externally and may be of brick. All dressings are in yellow oolite and from c.1860; the windows are simple double lancets. The vestry is buttressed externally. There is a simple, gabled double bellcote at the west end. There is some yellow brick in the boilerhouse from the late 19th century, and a simple square chimney. The roofs are slated gables; the boilerhouse has a slated lean-to roof. The floors are suspended except in the porch.

The medieval church was described by Lewis, 1833, as ‘an ancient structure’. It possessed the same general plan form as the present church, comprising chancel, nave and south transept, but there was no south porch (NLW, Llanafan-y-Trawscoed, Tithe Map, 1845). Beneath the transept was a family vault (Crossley and Ridgway, 1946, 50). Part of the medieval rood screen survived, ‘exhibiting an elegant specimen of carved work’, but was lost when the church was rebuilt.

The church was entirely rebuilt, but on the old foundations, in c.1860 (ibid.). The boilerhouse is from the late 19th century. There was a fairly major restoration in 1925 (Hook Mason, 1994, 4) when presumably the church was at least refinished.

The font is 19th century. The font present in 1833 was octagonal, and medieval.

There is neither an external cutting nor a drain. Floors are suspended over heating ducts in the nave and vestry. There is a (former) burial vault beneath the south transept. A few external memorials lie significantly close to all walls.

St Afan, Llanafan-y-Trawscoed, was not a parish church during the medieval period (Rees, 1932), but a chapelry of  Llanfihangel-y-Creuddyn parish in the medieval Deanery of Ultra-Aeron.

Llanafan-y-Trawscoed had become a parish by 1833 when the living, a perpetual curacy in the patronage of the Chichester family, the impropriators of the tithes, was endowed with £600 royal bounty (Lewis, 1833).

In 1998 St Afan, Llanafan-y-Trawscoed, was a parish church. The living was a vicarage held with Llanfihangel-y-Creuddyn, Llanwnnws and Ysbyty Ystwyth (Benefice no. 827) in the Archdeaconry of Cardigan, Rural Deanery of Llanbadarn Fawr (St Davids, 1997-8).

Anon., 1914, ‘The Old Bible at Llanafan’, Transactions of the Cardiganshire Antiquarian Society Vol. I.