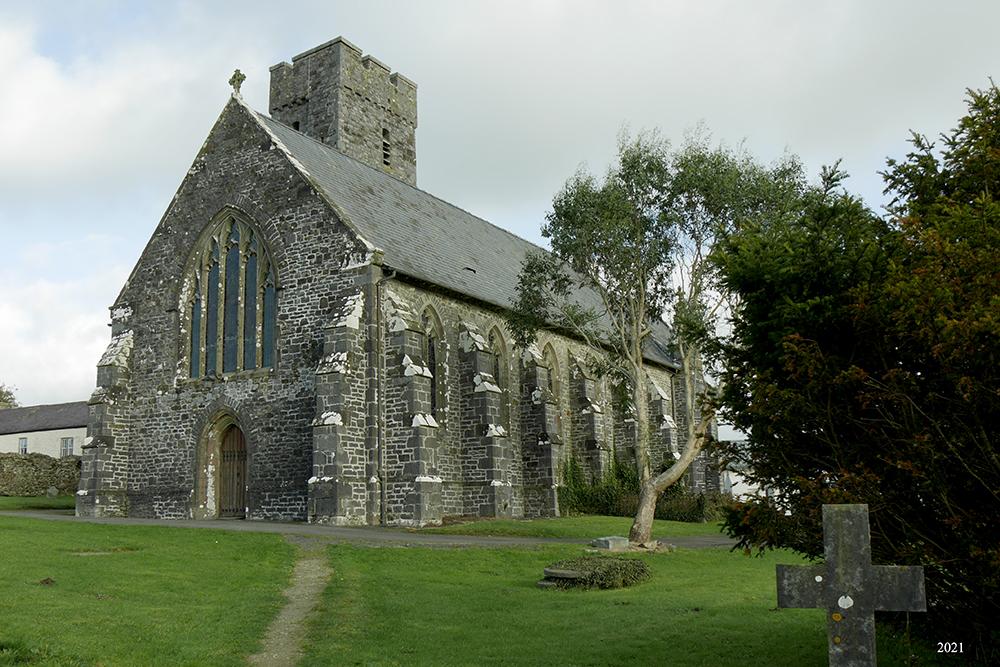 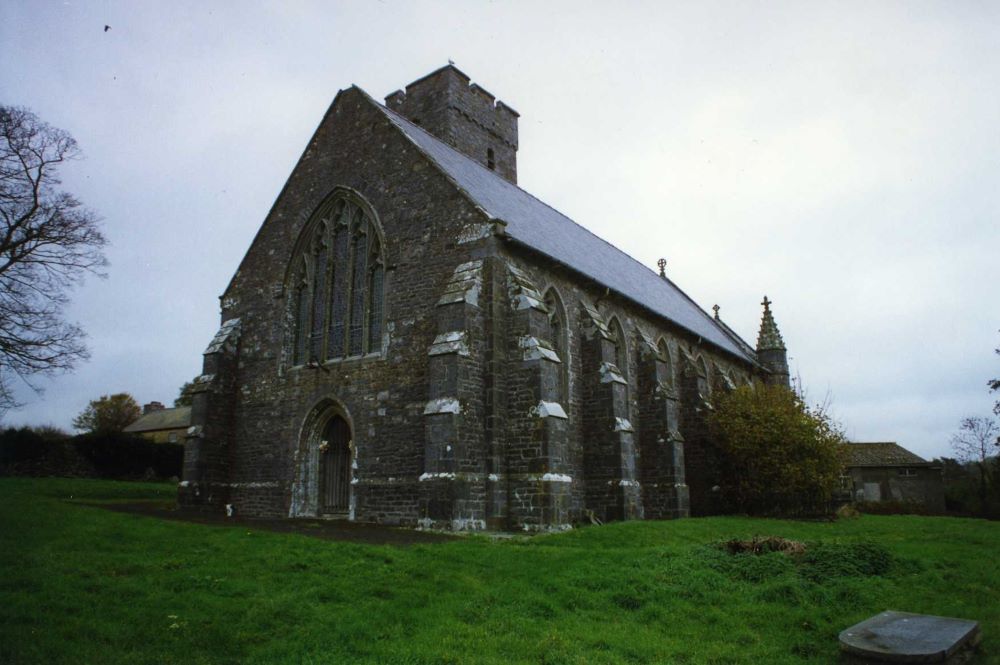 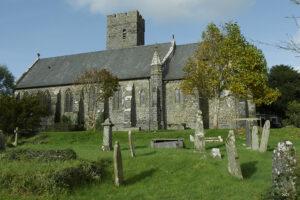 Reasons for Listing: None given.

Archaeological potential – good-very good. Medium-depth external drain around 100% of church; shallow revetted cutting around 30% of church. below-ground evidence for former components beyond 20% of church?; below-ground heating chamber beneath 15% of church; deep underfloor excavation and void; no external memorials significantly close to the church but evidence of former burials beyond 75% of church.

The present church consists of a 2-bayed chancel, a 5-bayed nave, a single-bayed north transept roofed continuously, as an east-west gable, with a single-bayed vestry to the east, and a 4-storeyed tower west of the north transept. The tower, the nave north wall and the lower courses of the transept/vestry north wall represent the only surviving pre-19th century fabric, the remainder of the church having been rebuilt in 1879-82.

The 19th century construction is in snecked local muddy limestone rubble, with grey limestone ashlar quoins; the medieval work is uncoursed. Pointing is mainly from 1879-82; the interior is plastered. All openings, except in the tower, are from 1879-82 and neo-gothic. They include the north transept and vestry arcades, which have moulded oolite 2-centred arches, and the elaborate tripartite chancel arch which features 2 cylindrical oolite piers. Doors are 2-centred, with chamfered grey limestone dressings. The 19th century windows are generally 2-light, with neo-Decorated ogival tracery, in chamfered grey limestone; the end wall windows have 3 and 5 lights, with similar tracery. The medieval nave north wall is blind, and exhibits no blocked openings. The exterior, except the tower and transept/vestry, has stepped buttresses throughout, cross-buttressed at the corners, from 1879-82; a larger buttress with a crocketed pinnacle lies on the south wall at the junction of the nave and chancel. An external chamfered grey limestone offset runs around the base of the 19th century walls. There is a heating chamber beneath the chancel, reached by an external stairway along the north wall, all from 1879-82. The roofs are slated gables, while the tower roof was not seen. The softwood roof timbers are from 1879-82 and 1903, as are the tiled passages and suspended board floors.

The north transept/vestry were rebuilt from a medieval north chapel which lay north of the medieval 2-bayed chancel. Only the lowermost courses of the medieval work have been retained, and the internal dividing wall is from 1879-82.

A medium-depth external drain surrounds the church. A shallow revetted cutting runs along the north wall of the church. There may be below-ground evidence for the former south transept and south porch beyond the nave south wall. There is a below-ground heating chamber beneath the chancel. One metre of ground was excavated beneath the floor level of the 1879-82 church and there is an underfloor void. No external memorials lie significantly close to the church but there is evidence of former burials to the east, west and south.

The pre-19th century church comprised a 2-bayed chancel, a 3-bayed nave, a 2-bayed north chapel, a north transeptal tower, a south transept and a south porch.

Three views of the church taken prior to 19th century rebuilding appear to show a building fundamentally unaltered from its medieval layout. The earliest, a Buck print from 1740 (NLW, Original Drawings, PD7042, Top. B12/6, B114) is an engraving from the south which shows the chancel with 2 square windows of 18th century domestic type in the south wall, the nave, the tower, the south transept with a large, 2-centred ?medieval window in the end wall, and the south porch. The same arrangement is shown in a sketch, again taken from the south, of c.1785 (NLW, Drawing Volumes 63, 119), depicting the transept window with 2 lights and with a circular light above, the nave west bay south wall as pierced by a slit-light or a lancet, and the south porch doorway with a low, 2-centred arch; the eastern of the 2 chancel windows had been blocked. The third is a watercolour from the east, from the earlier 19th century (NLW, Original Drawings, Parker Colln., Drawings Vol. III, 87) which again shows the same arrangements, and a corbel table on the tower east wall between the ground and second storeys. None of the views shows the north chapel.

The components as depicted suggest a largely 14th century date for the church, with a 15th century north chapel and a 16th century tower. The tower was apparently reroofed, in lead, after a lightning strike in 1796, and other repairs were undertaken (Morris, 1990, 16).

The church was enlarged in 1828 by the Narberth architect James Hughes (James, 1992, 43), aided by a grant of £150; in 1833 Lewis described the ‘recently rebuilt’ church as ‘a neat edifice, in the later style of English architecture… containing 150 free sittings’ (Lewis, 1833). A view of the church from the south, by the French artist A. Dousseau and reproduced by James (James, 1992, 45) shows a somewhat conventionalised building, lacking a south porch, but the south transept is shown, and tall, early 19th century neo-Gothic single-light windows, with 16-pane glazing, appear to be depicted throughout. The church is not included in the tithe map of 1840 (NLW, Narberth, 1840).

Except for the tower, the nave north wall and the north chapel, the church was entirely rebuilt in 1879-82 to the designs of the architect T. G. Jackson (NLW, SD/F/511). The new church exhibited an entirely different plan from its predecessor, lacking a south transept and a south porch, below-ground evidence for which may lie beyond the present nave south wall. The chancel extends east of the earlier chancel, and the nave extends beyond the west wall of the earlier nave.

The good-quality internal fittings are mainly from 1879-82 including the oak stalls, the pews and panelled dado and the polychrome oolite and marble pulpit. The neo-Tudor, panelled softwood and glass tower screens are dated 1927.

There is no firm evidence for the pre-conquest religious use of the site, but the nearby castle represents the probable site of the documented llys of Arberth.

St Andrew, Narberth, was a chapelry with a parish of its own during the post-conquest period (Rees, 1932), in the medieval Deanery of Pembroke. There appears to be no support for Rees’ depiction of the church as an advowson of a religious house, the living instead having been a rectory appendant to the Lordship of Narberth (Green, 1913, 210). In 1249, as a possession of William Marshal, Earl of Pembroke and Lord of Narberth, the rectory was valued at 30 marks (ibid.). In 1291 it was assessed at £1 1s. (Ibid.). The rectory appears to have fallen to the crown in 1536 when the Lordship of Narberth was abolished. Robeston Wathen church appears always to have been annexed to Narberth rectory.

In 1833 the rectory was rated in the king’s books at £25 10s 10d, and in the patronage of the king (Lewis, 1833). Robeston Wathen was still consolidated with the rectory, and the chapel of Mounton, with a parish of its own, was also consolidated with Narberth, to which it was traditionally regarded as a chapel-of-ease..

In 1998 St Andrew, Narberth, was a parish church. The living was a rectory, held with Robeston Wathen, Mounton and Crinow (Benefice 631) in the Archdeaconry of St Davids, Rural Deanery of Narberth (St Davids, 1997-8).