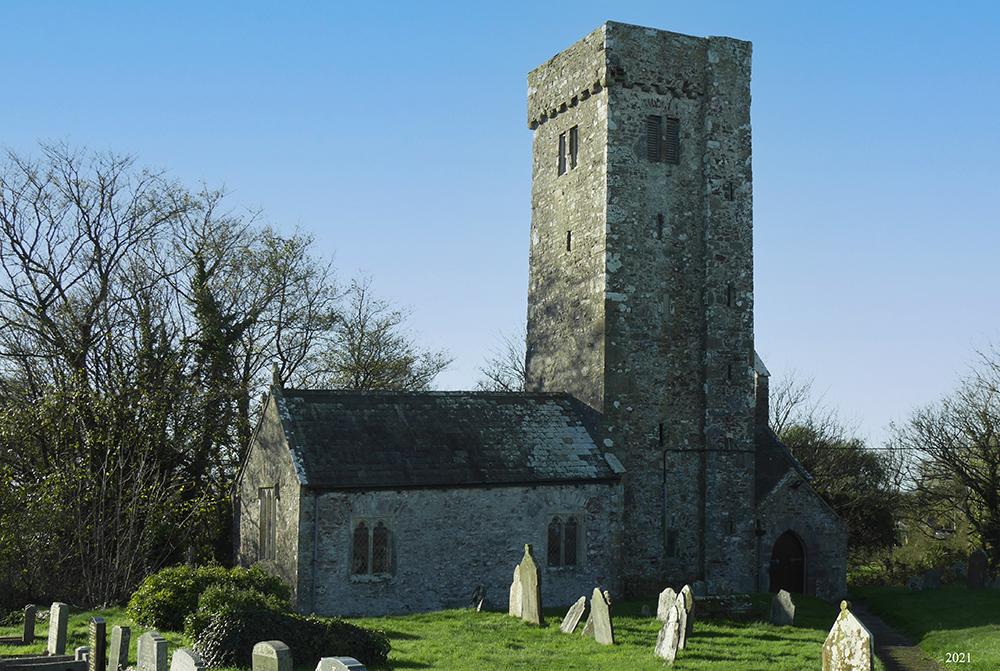 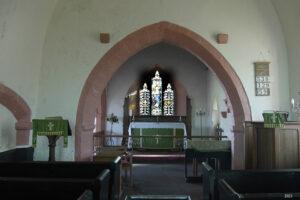 The present church consists of a 2-bayed chancel, a wider 2-bayed nave, a 2-bayed north chapel projecting slightly beyond the chancel, a transeptal 5-storey tower north of the nave east bay, and a north porch. Construction is in medium-sized Old Red Sandstone rubble, with some limestone and conglomerate, unsquared and uncoursed, with medieval quoins in the north chapel, tower and north porch. Good 1911 external pointing survives; there are areas of possible 18th century render on 10% of the church, and much poor repointing of the later 20th century. 75% of internal walls are rendered/plastered; the north chapel is lime washed internally. Slated gable roofs, the chancel, north chapel and porch roofs having always lain at a lower level than the nave roof which, with the porch, has slating concreted during the 20th century. The tower roof was not seen.

The deep, wide external cutting around the east and south walls, now with a concrete lining, is primary and footings are not exposed; there is a shallower depression parallel to, but 1.5m away from, the north wall – function?. The nave and chancel floors have been raised. No suspended flooring, or underfloor void, is present, but there is a possible crypt/vault below the chancel and there are many known burials beneath the north chapel. There is no evidence for any former component beyond the present church walls.

The medieval church has survived more-or-less unchanged. The nave and chancel are the earliest components, both possibly 14th century though the nave is vaulted and not the chancel. The chancel retains many medieval features including side-wall corbels for the former roof-trusses, and lower corbels of uncertain function. The west bay south wall forms a squared external projection with medieval coping back to the wall face, with an internal recess characteristic of Pembrokeshire (seen at eg. Johnston and Herbrandston) and sometimes termed ‘choir-recesses’. The recess is now lit by a later window. The chancel arch appears to be a later medieval insertion or rebuild; it is 2-centred, with deeply chamfered stops and plain imposts, of 15th century date. A low, plain raking external buttress against the nave south wall, of medieval date, supports the arch. Corbelling either side of the arch, on the west face, supported the former rood-loft.

The nave is vaulted with a 2-centred barrel-vault, and the side walls are battered. Both north and south doors are present, with 2-centred openings of 14th century date; the southern has been blocked, at an unknown date, but the open north door has retained its limestone surround. The blocked window visible beneath the sill of the present south window may be medieval. The western corners of the nave have square cot-outs, rising nearly to full height, but there is no indication that the wall has been rebuilt – function? There is a western bellcote, gabled, with a single square opening of plain construction, medieval (without bell). All other detail is from the later 19th century.

The north chapel was added in the 15th century; the 2-bayed arcade between the chancel and chapel is of 2-centred arches, supported on an octagonal pier with a plain impost and no base, very similar to the chancel arch and of the same date. The east and north walls feature 3 windows with 4-centred outer arches and square surrounds, with drip-moulds, and 3 lights, all of 16th century date (if partly restored). The south wall has a 15th century piscina with a semi-hexagonal bowl in a 2-centred recess. The large cross-incised stone within the chapel has been interpreted as a stone mensa or altar-table; its original position was said by W. D. Caroe in 1922 to be clearly marked on the wall, ‘as well as one corbel for the altar beam’ (Anon., 1922, 428). The north chapel contains the effigy of a lady, lying loose on the floor, which has been dated to the 14th century; it apparently formerly included a small canopy tomb, Decorated in style (Laws and Edwards, 1909, 351).

The tower, built in between the nave north wall, the north chapel west wall and the north porch east wall, is of 5 storeys, one of a group of Pembrokeshire towers (cf. Gumfreston and Humberston) with multiple horizontal divisions. It has retained most of its medieval fabric, of earlier 16th century date; it is only slightly tapered and lacks the basal batter and string course characteristic of the district. A square spiral stair turret projects from the north-west corner and is lit by simple slits. A corbel and half-arch support secondary thickening of the chancel west wall, to provide additional support for the tower. The tower ground floor has a fine octopartite ribbed (groined) vault, unusual for Pembrokeshire; it is pierced for the bell-ropes. It was open to the nave through a low, plain segmental arch possibly contemporary with the rest of the tower; however, the arch into the north chapel is 2 centred and deeply chamfered, while the nave arch  was described by Caroe as ‘semi-classical and probably Laudian’ (Anon., 1922, 428). Both arches are now blocked. A lancet in the north wall lights the ground floor; it has a square surround of the early 16th century. There is also a slit light high in east wall, into the north chapel. A number of similar slit-lights open into the succeeding 3 storeys, all plain. The belfry stage had openings in all 4 walls, the east and north walls with 2 square lights each, beneath segmental outer arches, earlier 16th century; the similar, single lights in the other 2 walls are blocked. The parapet lies on a plain corbel table that stops at the stair turret, also 15th century; both the turret and parapet are finished at the same level, with coping but without crenellations. There are some remains of external render, possibly 18th century. The tower is in good condition.

The north porch may have been added at a somewhat later date in the 16th century; it appears to post-date the tower. It has very large medieval quoins, and is vaulted with a 2-centred barrel-vault. Both side walls feature internal stone benching of medieval date. The 2-centred doorway has a surround of very large, squared voussoirs. A stoup in the west wall has a 4-centred head, and a weathered bowl, from the 16th century.

There is no evidence for any real alteration prior to the later 19th century restoration. There is a possible post-medieval crypt or vault beneath the chancel; a low arch is visible at the foot of the east wall. The north chapel floor level has not been raised and the flooring is of 18th-early 19th century limestone flags which appear to be in situ; the flooring includes many memorial slabs. The arches into the tower ground floor were blocked at an unknown date; the door from the north chapel is a simple square opening of possible early 19th century date. The Arms of William and Mary, in oak, were mounted on the tower east wall in 1922 (Anon., 1922, 428)

The church underwent some low-impact restoration in the later 19th century, before 1897 (date of glass) but neither the date nor the architect are known. There was some refenestration including the 3-light chancel east window, of 3 plain lancets in an oolite 2-centred surround, the similar cusped, 2-light windows in the nave south and west walls, and the chancel south wall lancet with a trefoiled rear arch. The north chapel roof may belong to this restoration; of softwood, it comprises common rafters with bolted collars. The chancel floor was raised, and limestone-flagged, the flags possibly dating to the 18th century and re-used. The nave and north porch floors are similarly flagged and without suspended flooring. The church was replastered, though the extent of removal of the existing plaster is unknown. The north chapel is at present limewashed, and may not have been plastered. The softwood pews and wainscot dado were installed, and probably the altar rail and the similar rail to the chapel.

The church was restored again in 1911 (Anon., 1911, 155), again low impact and again the architect is unknown. It may be now that the chancel was reroofed, receiving a softwood ‘wagon-roof’ ceiling, and the nave and porch roofs concreted. Weather tabling was fitted throughout, now in poor condition. The plain softwood reredos, the altar table and the pulpit appear to be of this date.

There has been little subsequent work on the church, although areas of the external stonework have poor repointing of the late 20th century. There has been much cement repair of the upstands and particularly the nave bellcote. The north chapel altar table and rail are post 1911.

The limestone font has a square bowl, slightly scalloped, and a cylindrical stem and square base of late 12th-13th century date.

The north chapel is traditionally known as the ‘Roch Chapel’.

There no firm evidence for any pre-conquest religious use of the site.

St Andrew, Robeston West, was a not parish church in the post-conquest period (Rees, 1932), but a chapelry of the medieval Deanery of Rhos. The living was a rectory appendent to the manor of Robeston, which, during the 16th century, was held by the Perrotts of Haroldston (Green, 1913, 260); upon the condemnation of Sir John Perrott in the early 16th century, the patronage probably fell to King Henry VIII (ibid.), and subsequent presentations were made by the crown.

In 1998 St Andrew, Robeston West, was a parish church. The living was a rectory held with Walwyn’s Castle (Benefice 376) in the Archdeaconry of St Davids, Rural Deanery of Roose (St Davids, 1997-8).

The dedication is given as both St Andrew and St James, according to the sources. In the will of Sir William Perrott, of 1503, it is St Andrew, as it is today; during the 19th and early 20th centuries the church was undedicated. 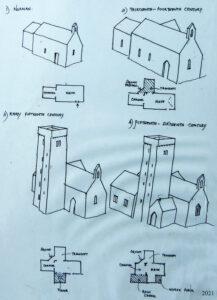 Suggested development of church copied from church information board. 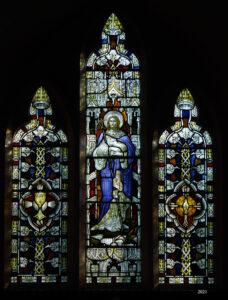