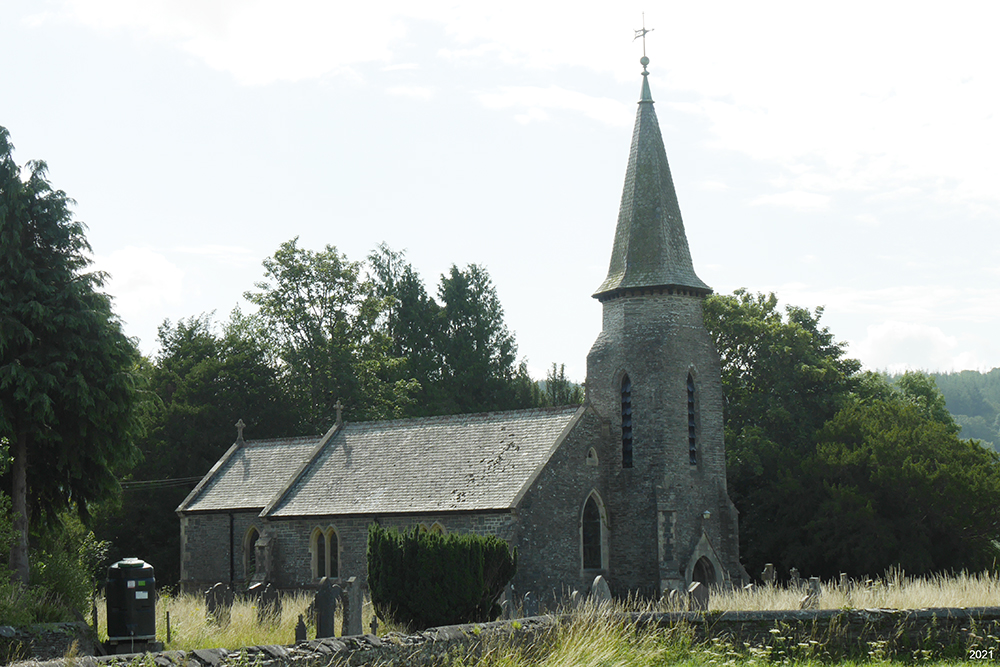 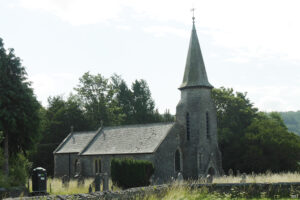 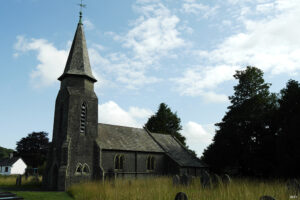 St Bledrws or St Michael, Betws Bledrws, is a multicell church of small-medium size. It was entirely (re)built in 1831 on the same site, and in the same location as its predecessor, but nothing was retained from the earlier fabric. The church was substantially rebuilt in 1886.

The present church consists of a 2-bayed chancel, a 2-bayed nave, a 2 storeyed tower south-west of the nave, and a 2-bayed vestry and organ chamber south of the chancel. Construction, including the boilerhouse, is in local, chiefly Llanddewi Brefi rubble; external pointing is largely from 1886 and the interior is plastered. All dressings are in yellow oolite and from 1886; the openings are neo-gothic single, double and triple lancets. There is limited external buttressing from 1886. The south-west tower is from 1831 and retains single lancet belfry openings, without dressings, from 1831; The belfry stage has broached chamfers into an octagonal summit, with an octagonal, fish-scale slated ‘spire’ (re)built in 1886 when angle buttresses were added to the tower. Roofs are slated gables; the vestry/organ chamber has a slated lean-to roof.

The form of the pre-19th century church is not known. It was ‘altered and repaired’ in 1831 (Lewis, 1833) as a ‘very neat and well-built edifice… with a tower surmounted by a well-proportioned spire cased with slate’. The work may have been undertaken to the designs of the architect C. R. Cockerell, responsible for the nearby mansion of Derry Ormond (Clive Powell, 1993, 1).

With the exception of the tower and nave west wall, the church was entirely rebuilt in 1886 to the designs of the architect D. Edward Thomas, of Haverfordwest (NLW, SD/F/35).

The limestone font, from c.1200, has a square, deeply chamfered bowl with a band of incised rosette mouldings, almost identical to that at Henfynyw, Cer., and similar to that at Llansantffraed, Cer. (Anon., 1914, 15).

The church is surrounded by a tarmac path in a very slight depression, secondary. Floors are suspended over heating ducts. There is a below-ground heating chamber in the nave. A number of external burial earthworks lie significantly close to the north, south and west walls.

St Bledrws or St Michael, Betws Bledrws, was a parish church during the post-Conquest period (Rees, 1932), of the medieval Deanery of Sub-Aeron. It appears to have always been in the patronage of the Bishop of St Davids.

In 1998 St Bledrws or St Michael, Betws Bledrws, was a parish church. The living was a rectory (Benefice 78) in the Archdeaconry of Cardigan, Rural Deanery of Lampeter and Ultra-Aeron (St Davids, 1997-8).

The dedication is given as St Bledrws by Lewis, 1833, but was apparently to St Michael in the medieval period (Rees, 1932).