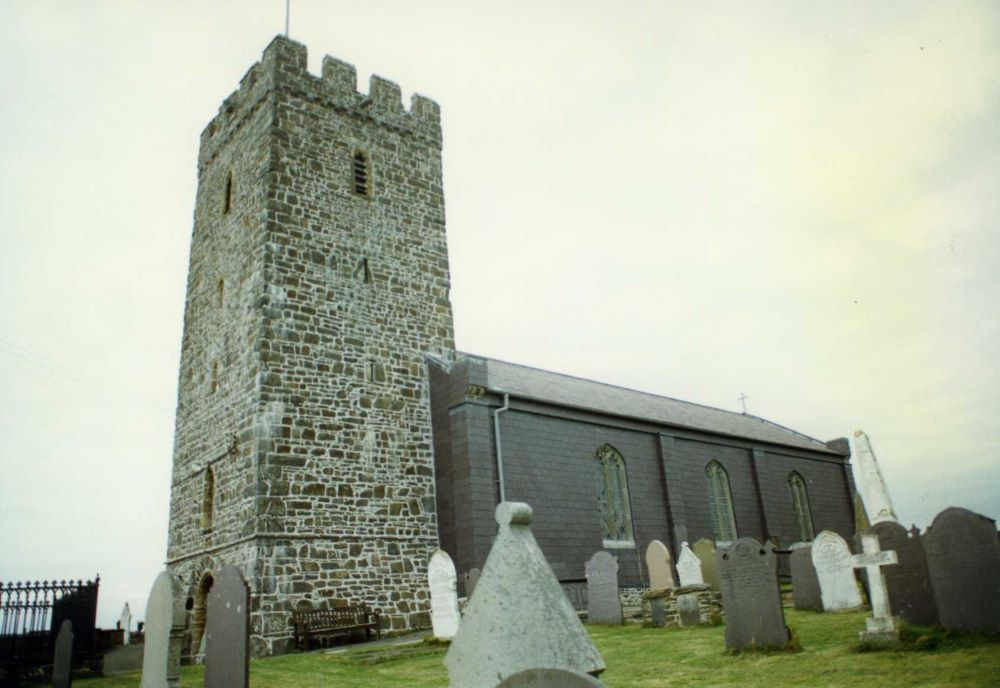 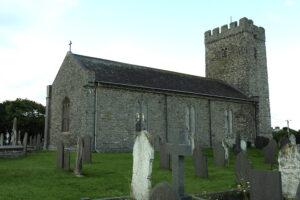 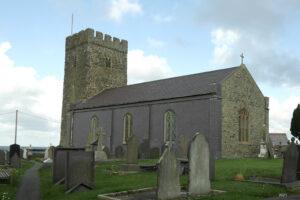 Reasons for Listing: Included at II* as a church with fine medieval tower and unusual internal design c1840 in the preaching house tradition.

The present church consists of a 3-bayed chancel/nave without structural division, and a 3-storeyed west tower. With the exception of the tower it was rebuilt in 1839-41 in the Nonconformist idiom. Construction is in local rubble, the south wall being hung externally with slates, the reminder with later 19th century pointing extensively repointed in 1994; plastered within. The chancel/nave windows have 4-centred heads, from 1839-41, but with cusped neo-Perpendicular 2-light windows, in grey oolite, probably inserted later in the 19th century. Thin external pilaster buttresses mark the division into bays. The chancel/nave roof is a continuous slated gable; the tower roof was not seen.

The west tower is from the early 16th century, comprises 3 storeys and is not entirely typical of the region having closer affinities with Pembrokeshire towers. It ha the external basal batter and string-course typical of that region and is not tapered. A square spiral stair turret projects from the east half of the north wall, entered through a 2-centred doorway and lit by simple loops. The west door has a 4-centred chamfered surround from the early 16th century; a single lancet above is contemporary. The ground floor formerly communicated with the nave through a 2-centred arch reflecting the profile of its barrel vault; this was blocked in 1839-41 and pierced with 2 square doorways, one at ground level and one into the west gallery above. The floor is flagged, pre-1839-41?. The ground floor is divided internally into 2 levels by a suspended timber floor, with a softwood staircase, from 1839-41. The second stage is lit by a 2 single lancets in the west wall, and 2 simple slit-lights in the south wall, all early 16th century. The belfry stage has a cusped, 2-light opening beneath a segmental arch in its east face, and similar single-light openings in the other 3 faces, all early 16th century. The crenellated parapet lies on an external corbel table. The tower was entirely repointed in 1994.

A deep, wide external revetted cutting surrounds the church except the west tower, from 1839-41. The floors are suspended over a void. External memorials lie significantly close to the church.

The moulded plaster ceiling in the chancel nave is from 1839-41, as is the western gallery supported on moulded iron columns. The softwood pews and stalls may be later 19th century. The reredos is from 1928 (NLW, SD/F/421). The pulpit, altar rail, chancel fittings and vestry screen are from 1929 (NLW, SD/F/422) Cadw, 1996, 1), when the font was moved to its present location The organ in the gallery is later 20th century.

The limestone font, from c.1200, has a square, deeply chamfered bowl with a band of incised rosette mouldings, similar to those at Betws Bledrws and Henfynyw, Cer. (Anon., 1915, 13).

St Bridget, Llansantffraed, was a parish church during the medieval period (Rees, 1932), of the medieval Deanery of Ultra-Aeron. It was granted to the Knights Hospitaller of Slebech by Roger de Clare in 1158, confirmed by Rhys ap Gruffydd in the later 12th century (Rees, 1897, 102) but was transferred to the Bishop of St Davids by King Edward I in the later 13th century (Rees, 1899, 290).

In 1998 St Bridget, Llansantffraed, was a parish church. The living was a vicarage, held with Llansantffraed and Llanbadarn Trefeglwys (Benefice no. 688) in the Archdeaconry of Cardigan, Rural Deanery of Glyn Aeron (St Davids, 1997-8).