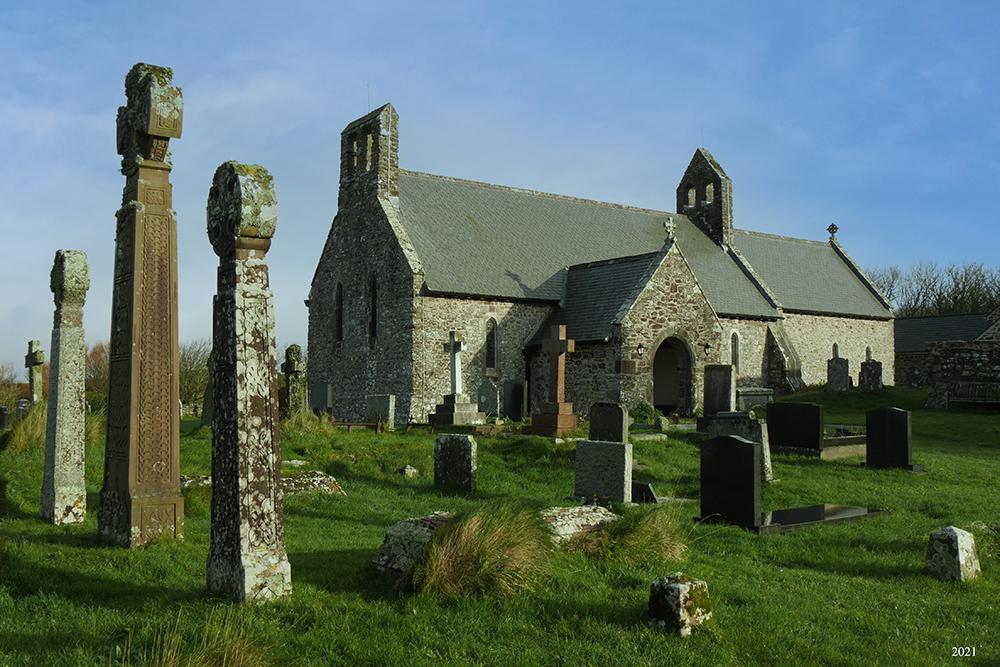 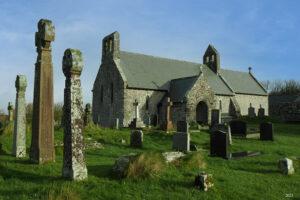 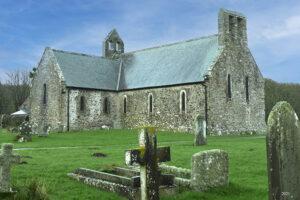 Reasons for Listing: A medieval church carefully rebuilt in the C19 with good interior fittings, medieval to early C20.

The present church consists of a 3-bayed chancel, a wider 4-bayed nave, a single bayed lean-to vestry north of the chancel east bay, and a south porch. There was formerly a (medieval) south transept; a fragment of oak rood-screen has been preserved, but not in situ. Construction is in small-large limestone rubble throughout, with a small percentage of Old red Sandstone, unsquared and uncoursed, with large medieval quoin. Fair mortar pointing, 1868, over extensive areas of 18th century render, and some poor 20th century repointing. The internal walls are rendered/plastered. Roofs are slated gables, the always nave roofed at a higher level than the chancel, transept and porch; the vestry roof is a slated lean-to.

The basic plan of chancel, nave, north transept and south porch follows the medieval arrangements. The vestry has been modified from a skew-passage, and a south transept was formerly present, but has been removed.

A wide, shallow-deep cutting surrounds the church, except the south porch, and is deeper on the south side, mainly primary but secondarily deepened and exposing footings in areas, particularly the chancel north wall; it is concrete-lined. The chancel and nave floors may have been lowered; the medieval door sills lie above present floor level. A crypt/vault formerly lay beneath the north transept. The nave floor is suspended. An external pipe trench from the detached boilerhouse runs below ground and into the nave east bay south wall. A south transept formerly existed, and a substantial earthwork scarped ‘platform’ occupies its site, cut by 19th century burials.

The chancel, nave and north transept are similar in construction, and all feature a basal external offset. They may all be contemporary and possibly built, along with the former south transept, as a deliberately planned cruciform church in the 14th century, when similar plans were being undertaken elsewhere. The south porch may not, on stylistic grounds, be much later. The church has retained much of its medieval layout, and a substantial number of medieval features.

The chancel exhibits a plain lancet in the east bay south wall, of broadly medieval date, and beneath it a piscina with a 2-centred head and a square bowl, later restored. The centre bay was entered through a ‘priest’s door’ in the north wall, with a squared segmental head visible internally but blocked early on and no longer visible externally. A similar blocked door lies in the west bay south wall, west of a rebuilt medieval square-headed light. The west bay north wall is occupied by the plain, segmental arch into the former skew passage (now vestry) with deeply chamfered stops. The 2 centred chancel arch is plain, with plain chamfered imposts, and 14th century. The rood-loft door to the north of the arch is still open, and has a 14th century surround with a head rebuilt as a 4-centred arch in the 15th-16th centuries; the west face, and the nave east bay side walls, display 5 rood-loft corbels. The wall supports a gabled, plain sanctus bellcote with 2 segmental openings, more-or-less unrestored; there are now no bells.

The main entry has always been in the nave south wall, and has a 2-centred sandstone surround of the 14th century (partly restored). The west wall carries a square double bellcote, finished with flat coping which forms the head of the 2 simple square openings, all substantially medieval. A plain, 2-centred arch leads from the nave east bay into the north transept. The south wall of this bay exhibits, on its external face, the west half of an infilled 2-centred arch, the east half obscured by a later buttress; the arch led into the former south transept. The infill lies beneath external render of the ?18th century and is pierced by a window; all windows in the nave are from 1868 and are in de novo embrasures, with infill.

Lying loose in the nave is a fragment of carved rood-screen. It comprises 2 traceried heads and fragments of standards, a muntin and a rail made up into modern wainscoting (Crossley and Ridgeway, 1956, 12, 26) and is placed against the east wall, having apparently been recovered from the yard in 1868 (see below). It constitutes one of the very rare pieces of medieval worked timber in Pembrokeshire, and is possibly of 15th century date.

The arch into the vestry, ie. the former skew passage, through the north transept east wall is plain and segmental; to the north is a single plain lancet of possible 15th century date. There is a medieval corbel in the east wall of the transept, of unknown function. All other windows are again of 1868, in de novo embrasures, with infill. In the transept are the fragments of 4 effigies, all weathered, of 14th-15th century date. One appears to represent a cleric (Allen, 1893, 249) and may have been the effigy seen in c.1811 outside the transept (see below); the other 3 were recovered from the yard in 1868 (see below) and only the heads only survive.

The porch side walls have internal sandstone benching of possible 17th century date. Otherwise, little succeeding work (apart from the Reformation stripping of liturgical timberwork – see below) appears to have been performed at the church prior to 1868; the south transept was removed, however, before the 18th century external rendering. The north transept was, at some time during the post-medieval period, walled off as a family vault (Pembs. R. O., HPR/63/15).

In c.1811 the church was described as ‘a building of a very dignified appearance, having a tower and side aisles’, with ‘the effigy of a priest’ outside the north transept (Fenton, 1903, 97; Allen, 1893, 249). Samuel Lewis, however, described the church in 1833 as ‘not distinguished by any architectural features of importance’ (Lewis, 1833). Both descriptions are somewhat flawed; it is highly doubtful if there ever was a tower, or even that the south transept was still standing in 1811.

The pre-restoration church was described more credibly in 1856 (Glynne, 1885, 209), when the plan was it is at present (without the vestry), as were most of the details. The two double bellcotes are described as they exist at present, as is the chancel arch, rood-loft door and north transept arcade. The windows, apart from the ‘mutilated’ chancel east window (medieval?) and chancel south wall lancet, with its piscina, were ‘mostly modernised’ (probably sashes) and ‘fortified with shutters’. The blocked chancel north door was noted. The entire church was whitewashed externally.

The church was restored in 1868 (Green, 1913, 273; RCAHM, 1925, 318), under C. Buckeridge, architect (Glynne, 1885, 209). The restoration was low-medium impact. The north transept arch blocking was removed (Pembs. R. O., HPR/63/15). The church was refenestrated, with neo-gothic windows, the window openings mainly having been built new and lying within infilled areas; the chancel east window is a triple-lancet window with oolite surrounds, the remainder similar single lancets. A coped buttress was built against the nave south wall. The internal walls were replastered, but the extent of removal of the existing plaster is unknown. The church was re-roofed in oak, the chancel with a roof of arch-braced, king-post trusses and scissors-braced common rafters, while the nave roof is all of scissors-braced common rafters. The north transept common-rafters all have scissors-braces and king-posts. In the south porch the common rafters are collared. Weather tabling was provided. The church was refloored, and the nave and chancel floors may have been lowered. The chancel, north transept and south porch floors are tiled, and the nave passages are tiled with suspended board floors. The church was reseated, with oak stalls free-standing on the chancel floor and softwood pews. An altar table and rail, chancel screen and pulpit were installed.

A vestry was adapted from the former skew passage between the chancel east bay north wall and the transept east wall; the skew passage was possibly removed at an earlier date and, as in the transept (see above), its arches may have required unblocking. It is of roughly squared and coursed limestone rubble with a similar window to those elsewhere in the church. It has a softwood lean-to roof, of common rafters, continuing the chancel roof northern slope.

During the restoration, the three almost defaced effigies in the north transept (see above) were brought into the church from ‘a corner of the churchyard’ (ibid.)., and a fragment of carved oak featuring Sheba and King Solomon, formerly painted and gilt. The present fragment of rood screen was also found and refixed in the nave (ibid.).

There has been some further work. A detached boilerhouse was built in the south of the yard, with below ground heating pipes into the nave, during late 19th century/early 20th century. There has been considerable repointing of general 20th century date. The oak reredos, arcaded, with turned shafts, is earlier 20th century.

The limestone font is medieval, with a square scalloped bowl and cylindrical stem of 12th-early 13th century date; the octagonal limestone base is later medieval.

St Bridget, St Brides, was a parish church in the post-conquest period (Rees, 1932), of the medieval Deanery of Rhos. The original patronage of the rectory is not known, but in 1536 it was held by John Wogan of Wiston, Pembs. (Green, 1913, 272-3) who sold it, in 1577, to Francis Laugharne of St Brides. It remained in the patronage of the Laugharne family; by 1833 the patronage was held alternately by W. P. Laugharne, Esq., Charles Phillips, Esq. and John Nash, Esq. (Lewis, 1833).

In 1998 St Bridget, St Brides was a parish church. The living was a rectory held with Dale and Marloes (Benefice 664) in the Archdeaconry of St Davids, Rural Deanery of Roose (St Davids, 1997-8).