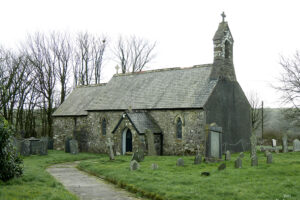 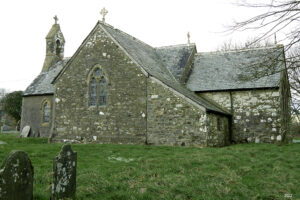 The present church consists of a 2-bayed chancel, a 4-bayed nave, a single bayed south transept, a north porch and single bayed vestry south of the chancel. Construction is in large limestone rubble throughout, unsquared and uncoursed, but with some medieval limestone quoining. Good pointing, later 19th century, but with poor 20th century repointing in areas. The internal walls are rendered/plastered. The nave and south transept are now of roughly equal height; the chancel and porch are lower. Roofs are slated gables; the vestry roof is a slated lean-to.

The plain, 2-centred chancel arch is medieval. Similar arches lead from the south transept into both the nave and the vestry, and the from the chancel east bay south into the vestry, and can be seen as a recess in the chancel north wall; all are probably 14th century (see below). There is a medieval plain rood-loft corbel either side of the chancel arch, while the nave west wall features masonry benching beneath a wide, low segmental arch, all of medieval date. The remainder of the detail is all from 1884-5; the windows are mainly neo-gothic lancets (clustered in 3 in the chancel east wall) but the south transept window is 2-light and traceried. The present 2-centred north doorway, and the bellcote which is single, gabled, and shouldered, are similarly from 1884-5.

The east end of the church lies upon a possible earthwork platform, the shallow scarp slope of which runs along the east wall and curves towards the south-east corner of the south transept; it may be a primary feature. A shallow concrete drain runs around the entire church, but possibly exposing the footings of the south transept south wall. There is no evidence for or against floor level changes within the church. There are suspended floors in the nave, south transept and vestry; the north porch floor lies directly on the substrate. A below-ground heating chamber occupies the nave west bay. There is no evidence for any further below-ground crypt/vault within the church.

The church appears to have altered significantly from its medieval form. The chancel, nave and south transept all appear to be of one build and are medieval, but visually, the walling appears to have been significantly rebuilt or at least refaced in the restoration of 1884-5. Moreover, important components of the medieval church appear to have been removed. The former presence of a north transept is demonstrated by the disposition of 18th century chest tombs within the yard which appear to be arranged around the north-east corner of a (then) standing structure. The north wall of the chancel east bay displays the arched recess noted above, and is produced externally as a thicker wall with a coped summit and a joint to the nave; the recess appears to represent the blocked archway into a skew passage from the former transept. The corresponding arch in the chancel east bay south wall, now leading into the vestry, probably led into a similar skew passage, the similar arch leading into the south transept still present. The medieval church thus described would have a symmetrical cruciform plan, not uncommon within the district. The similarity of all the arches suggests that chancel, nave and transepts (inc. passages) were constructed as one phase, probably during the 14th century.

The church was apparently ‘rebuilt’ in 1778 (Anon., 1883, 340), a date which accords with the demolition of the suggested north transept and skew passage, and the blocking of their arches; the transept was certainly gone by 1830 when a burial took place on its site. The suggested southern skew passage was probably demolished at the same time, and its arches blocked – it had gone by 1884 (see below) – while the ‘foundations of an arch’ were observed in the south transept east wall in 1883, prior to the construction of the vestry and the reopening of the arches (ibid.).

The church after the 1778 rebuilding is depicted in the Faculty plan for the 1884-5 restoration (NLW, SD/F/199). It comprised just the chancel, nave and south transept. All arches have been blocked save the chancel arch. Openings – including the north door – are in their present locations but the 2 westernmost nave windows were absent. All were single light and were timber framed sash windows (NLW, SD/F/199). There was a bellcote on the nave west wall. The pews were already open benches. The church was described by a contemporary observer as ‘not distinguished by any architectural details of importance’ (Lewis, 1833).

The church was restored in 1884-5 (NLW, SD/F/199), following specifications by the architect E. H. Lingen Barker, of London, Hereford and Tenby. The restoration as proposed was fairly low-impact but, as has been noted above, much of the walling appears to have been rebuilt or at least refaced. The north door was rebuilt and new windows inserted, largely on the site of the existing (1778) windows. The bellcote was rebuilt. Entirely new softwood roofs were put on throughout, a boarded ‘wagon-roof’ ceiling in the chancel and collared roofs in the nave and transept, with scissors-braces arch-braced from wall corbels; there are, however, no upstands or weather tabling. The interior was replastered but the extent of removal of the old is unknown. The chancel floor, and nave and transept passages, were polychrome-tiled and suspended boarded floors were put in beneath the new seating in the latter two cells. The new vestry was built south of the chancel utilising the former skew-passage arches which were unblocked; it appears, however, that the architect was unaware of their presence when the plans were drawn up as the walls were depicted as solid. The buttressed north porch was also built new, with a 2-centred doorway and a scissors-braced roof. Most fittings, except the font which was moved to its present location, are from this restoration, and include the seating, altar rail, oolite credence shelf and recess and the oolite-based pulpit.

There has been little further work on the church, except some poor 20th century repointing, and the introduction of a new altar table, also 20th century.

The oolite font is medieval, with a square cushioned bowl, cylindrical stem, and square base, all probably 13th century.

In the chancel is the fragment of an ECM (Dyfed PRN 1296) exhibiting part of an incised cross. It was found ‘built up in one of the chancel walls’ during the restoration of 1884-85 (Evans, 1917, 7); however it is said – spuriously? – to be not in situ (Salter, 1984, 55) having instead come from a ruined medieval chapel within the parish (also dedicated to St Brynach).

Henry’s Moat was a parish church during the post-conquest period, of the medieval Deanery of Cemais, and appears originally to have been dedicated to St Brynach (Rees, 1932); the dedication, however, became corrupted to St Bernard (Lewis, 1833) before returning to its original form.

In 1998 St Brynach, Henry’s Moat, was a parish church. The living was a rectory, held with Maenclochog, Llandeilo Llwydarth, Mynachlogddu, Llangolman, New Moat and Llys-y-fran (Benefice 831) in the Archdeaconry of St Davids, Rural Deanery of Daugleddau (St Davids, 1997-8).