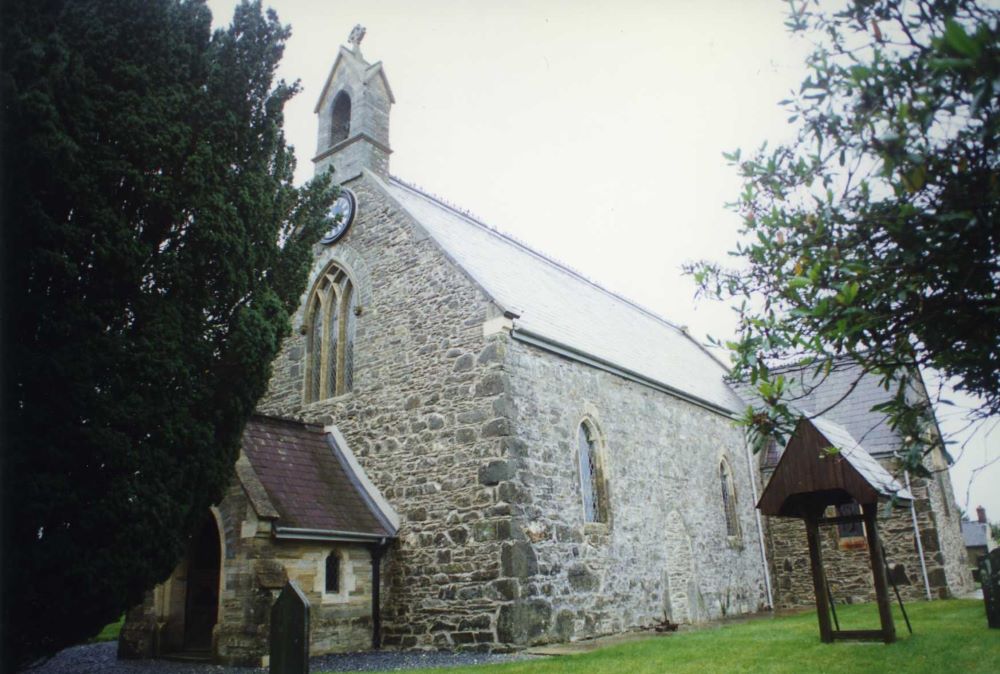 Reason for Listing: Included as a village church of medieval origins, primarily for position at heart of a largely C19 estate village.

Archaeological potential – very good. Very shallow external cutting around 5% of church, footings exposed: former components beyond 20% of church; levels unchanged; suspended floors over a void in 70% of church; burial vaults beneath 25% of church; no external memorials significantly close to the church.

The present church consists of a 3-bayed chancel, a 3-bayed nave, a large, 2-bayed vestry north of the chancel, single-bayed north and south transepts, and a west porch. Construction is in mixed local rubble. Pointing is mainly from the 1850s, with some 20th century repointing of poor quality and some of good quality; the interior is plastered. The chancel artch, and transept arches, are medieval. Other openings are from the 1850s and neo-gothic, with yellow oolite dressings. Roofs are slated gables.

The 3-light chancel east window has a dripmould and geometric tracery, all from the 1850s. Built into the east wall are two 15th century heraldic shields said to be from Whitland Abbey (RCAHM, 1917). In the south wall is a large window with a square surround and label, and 4 cusped lights, from the 1850s. The north wall is pierced by a plain segmental pointed doorway that may be, or originally have been, a 15th century ‘priest’s door’ (see below); it now leads to the vestry. The plain, 2-centred chancel arch is probably medieval; the adjacent nave quoins are large, and are medieval. The softwood roof is from the 1850s and has queen-post trusses arch-braced from wall-corbels, matchboarded above. the floor is tiled, 1850s, over burial vaults.

The nave is lit by 2 cusped single lancets, from the 1850s, in each of the side walls. The north wall exhibits a central area of blocking representing a large, ?late medieval window, the west jamb dressings of which are partly exposed. In the opposite, south wall is a blocked doorway with a rounded, 2-centred surround in plain chamfered limestone, from the 13th century?; the infill contains an ECM moved to this location in the later 18th – 19th centuries possibly contemporaneously with the blocking (see below). The west wall has large, medieval quoins; the west door has a similar profile and surround to the south door but is plastered over, medieval?. Above it lies a 3-light window with a 2-centred drip-mould and simple intersecting tracery, from the 1850s?, or earlier?; a gabled single bellcote, with gablets, rises above, in ashlar from the 1850s. The roof is like that in the chancel and also from the 1850s. The passages are tiled over a void, from the 1850s (partly relaid with concrete in the 20th century); suspended board floors were formerly present but were infilled with concrete in the 20th century.

The transepts open into the nave through plain, 2-centred medieval arches, that to the north without stops. The north transept is short and of random facework with very large, crude medieval quoins. It is lit by a window in the end wall, like the two east windows, and also from the 1850s, but 2-light. The south transept is in small, very mixed rubble with crude medieval quoins. It is lit by cusped single lights in the east and west walls, with dripmoulds, and a window like that in the north transept in the south wall, all from the 1850s. The softwood roofs, from the 1850s, lack rafters and is matchboarded above the purlins. Floors as in the nave.

The west porch is also from the 1850s and of the same construction as the vestry; the west wall has simple buttresses at each end. The 2-centred doorway is contemporary, with polychrome voussoirs and a chamfered surround; the side walls are each pierced by a contemporary cusped lancet. The simple raftered softwood roof is matchboarded, and from the 1850s, as is the quarry-tiled floor.

There is a very shallow external cutting along the north transept north wall which exposes its footings; there is no further drain or cutting. A west tower, and a ?schoolhouse, were formerly present (and a former chapel beneath the present vestry?), which may be represented by below-ground evidence. There is no evidence for any floor level changes. The flooring is suspended over a void in the nave, transepts, and vestry. Burial vaults lie beneath the chancel floor. No external memorials lie significantly close to the church.

The nave is medieval, but cannot be closely dated, 13th century? The north and south transepts are not symmetrical, show different facework styles and may not be coeval, the shorter northern transept possibly being the earlier; a joint is visible between the east wall of the south transept and the nave. Both possibly predate the large chancel which may be an addition of the 15th century; the chancel arch, however, is plain and probably earlier, relating to a 13th century chancel?. The remainder of the church is from the 1850s.

The mid 19th century vestry is said to be on the site of a former chantry chapel (Lewis, 1975, 155; RCAHM, 1917). However, no building is shown in this location on the tithe map of 1839 (NLW, Llanboidy, 1839). The tithe map does show a long rectangular building leading north from the west half of the nave. It is similar in location to the 18th – early 19th century school-houses present, for example, at Eglwyswrw, Pembs., but the sources make no mention of a school or master, and suggest no alternative function; there is now no above-ground evidence for the structure.

The church was reseated in 1854 (Carms. R. O., CPR/27/12). It is probable that the restoration was undertaken at around the same time, but the date, and the architect responsible, are unknown. The vestry and west porch were built. the church was refenestrated, reroofed and refloored. Internal plaster was stripped and replastered.

The softwood reredos with commandment tablets, the freestanding softwood stalls, the softwood pews and pulpit may all be from the 1850s. The clock on the west wall may be contemporary. The hardboard vestry screen is late 20th century.

The oolite font has a decorated octagonal bowl, stem and base, and is late 19th – 20th century.

The ECM built into the south door blocking bears a Latin inscription; in the early 18th century it was ‘pitched on end in (the) steeple’ (Owen, 1896, 132-3). Two more ECMs are said to have been formerly present (ibid.).

St Brynach, Llanboidy, was a parish church during the medieval period, of the medieval Deanery of Carmarthen. It was a possession of the Bishops of St Davids as a prebend of the collegiate church at Llanddewi Brefi, Cer. (Lewis, 1975, 153). By the early post-medieval period, a dependent chapelry had been established at Whitland.

In 1998 St Brynach, Llanboidy, was a parish church. The living was a vicarage, held with Meidrim and Merthyr (Benefice no. 691) in the Archdeaconry of Carmarthen, Rural Deanery of St Clears (St Davids, 1997-8).