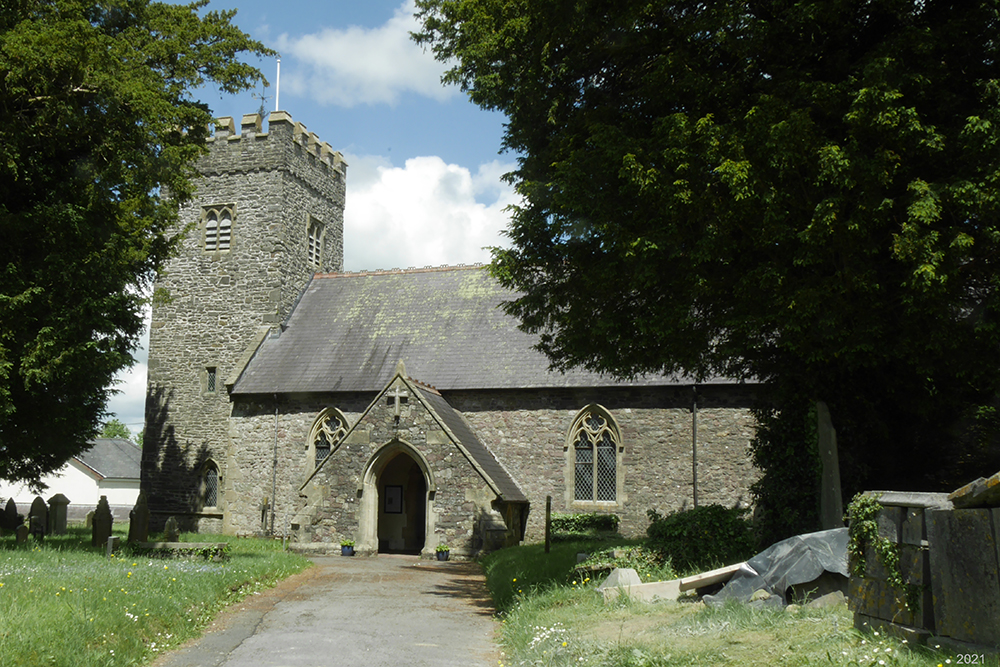 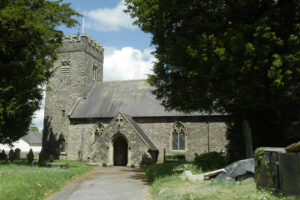 Reason for Listing: Listed as a church with medieval origins retaining a good C14 tower, the rest remodelled in a consistent late C19 Decorated style. The church contains a good set of C18 – C19 memorials. It is a key element in the village centre.

The present church consists of a 2-bayed chancel, a 5-bayed nave, single bayed north and south transepts, a south porch and a west tower.

Construction is in medium-sized Old Red Sandstone rubble with some limestone, medieval, with some medieval oolite ashlar quoins, many rebuilt/replaced in 1888-9. There are the very limited remains of early external render on the nave north and west walls. The external pointing is largely from 1888-9 but with 20th century ribbon pointing in areas. The interior is plastered, again from 1888-9. Slated gable roofs, the nave probably always roofed at a higher level; the west tower roof was not seen. Roofs and floors, 1888-9.

A deep, wide. revetted external drain runs along the nave south wall. No evidence exists for floor level changes. An underfloor void is present. A below-ground boilerhouse lies beneath the south porch, and heating chambers within the nave. There are crypts/vaults beneath the chancel and north transept; possibly also beneath the south transept – burials are said to occur just beneath the surface of the south transept, and east of the church (Anon., 1910, 40). External memorials lie significantly close to all walls except the tower. The foundations of an apse are said to lie beyond the present east end (Anon., 1855, 306; RCAHM, 1917, 146).

The ground plan of the church has changed little since the medieval period, but few medieval features have survived, openings being largely from 1888-9. However, the chancel, nave and transepts may be all of one build, deliberately cruciform – the plan, and length of the nave suggesting a possible 14th century date.

The 3-storeyed west tower is of c.1500 (Yates, 1974, 73) and has retained most of its medieval fabric of limestone rubble, possibly with early pointing; internally, the ground floor walls are plastered, from 1888-9. There is not the basal batter typical of the region, but there is an external string-course (rebuilt in 1888-9) and the tower is untapered, and without a spiral stair turret. The ground floor openings, 2 cusped lancets and a 2-centred west door, are from 1888-9. There is no ground floor vault, but a timber ceiling replaced in 1888-9. The floor is tiled as the nave passage and at the same level, 1888-9. There is a window of 2 lights with semicircular heads in a square surround in the second stage north wall, c.1500; the south wall window is as on the ground floor. The 2-light belfry openings are all from 1888-9. The crenellated parapet lies on a corbel table; all medieval but recoped in 1888-9. The tower openings were described as all ‘square-headed slits’ in 1850 (Glynne, 1898, 362). It is in good condition.

A square external projection towards the east end of the nave north, nearly full-height and dying back into the wall, exhibits an internal blocked doorway with a 4-centred head, of the 15th-16th century, and represents a former rood-loft stair. The south door and nave west wall door are medieval entries but have been rebuilt. A internal stoup was possibly present east of the south door, but removed and blocked in 1888 (NLW, SD/F/341).

It may be assumed, then, that though the core plan was unchanged, little medieval detail remained when plans for restoration were submitted, in 1874, by the architect R. J. Withers, of London (Carms. R. O., CPR/49/20). In fact, it was 1888 before restoration work commenced, this time under the architect D. Jenkins, of Gorslas, Llandybie for an estimated cost of £1212 (NLW, SD/F/341). The restoration was high-impact. The south transept and chancel walls were demolished and rebuilt (to greater extent than indicated in the Faculty); the south porch was substantially rebuilt. The nave walls were to be largely relined internally; the survival of the rood-stair doorway suggests that this may not have been done, but most walls display evidence of some refacing. Buttresses were built in the angles between the chancel and the transepts; the northern carried a flue, now blocked. A 2-centred chancel arch was rebuilt in moulded oolite; the arcades to the transepts were similarly rebuilt. All windows in the body of the church were (re)built, the east and transept windows with geometric tracery, oolite; the remainder are largely 2-centred openings for 2-light windows with central trefoils, the surrounding infill visible. The 2-centred, moulded south door, porch door, west tower door and nave west wall doors are rebuilds. An aumbry/recess, with a trefoil-moulded head, was featured in the chancel north wall. An external buttress built against nave north wall, and angle buttresses on the porch. The church was entirely reroofed in softwood, the chancel, nave and transepts with a matchboarded ‘wagon-roof’ ceiling, corbelled from the side walls in the nave; the end walls were given weather tabling. The south porch roof is of collared common rafters. A below-ground boilerhouse was inserted beneath the (rebuilt) south porch, and 2 subsidiary heating chambers within the nave. The porch, and the nave and transept passages were tiled, with gratings to heating ducts; suspended board floors were inserted beneath the new seating. The church was replastered, with a decorative fillet band; probably all the existing plaster was removed. The nave and transepts were reseated in softwood, and an oolite pulpit fitted.

There has been a fair amount of subsequent work. An organ was installed in the south transept after 1888-9 restoration (NLW, SD/F/341). The chancel floor was oolite-flagged in the later 20th century, and the oak-panelled altar table and reredos, the altar rail and the credence table are also later 20th century.

The font has an octagonal limestone bowl and a square stem and base, all one-piece and later medieval (14th-15th century).

The church site  may be associated with a very large, former outer enclosure (Sambrook and Page, 1995 (i), 7).

St Cadog, Llangadog, occupied the high-certainty site, and probably the location of, a pre-conquest religious site –

St Cadog, Llangadog, was a parish church during the post-conquest period, of the medieval Deanery of Stradtowy (Rees, 1933). The benefice formed a part of the estate of the Bishops of St Davids, a connection possibly arising during the pre-conquest period. In 1283 Bishop Bek of St Davids founded a college at the church for a precentor and 21 canons (Soulsby, 1983, 169; Lewis, 1833); it was however short-lived, being transferred to Abergwili in 1287, and doubt has been expressed as to whether the intention was ever carried out (Knight, 1919, 12-13). However, the remains of buildings to the north of the church seen in 1855 were said to belong to the college (Anon., 1855, 306), and canons were present in 1289 when Pope Nicholas IV granted William of Estavayer, a canon of Llangadog, to a prebend of Lincoln Cathedral (Lewis, 1937, 237). The church remained in the patronage of the bishop and in 1833 was rated in the king’s books at £9.

In 1998 St Cadog, Llangadog,, was a parish church. The living was a vicarage, held with Gwynfe and Llanddeusant (Benefice 634) in the Archdeaconry of Carmarthen, Rural Deanery of Llangadog and Llandeilo (St Davids, 1997-8).