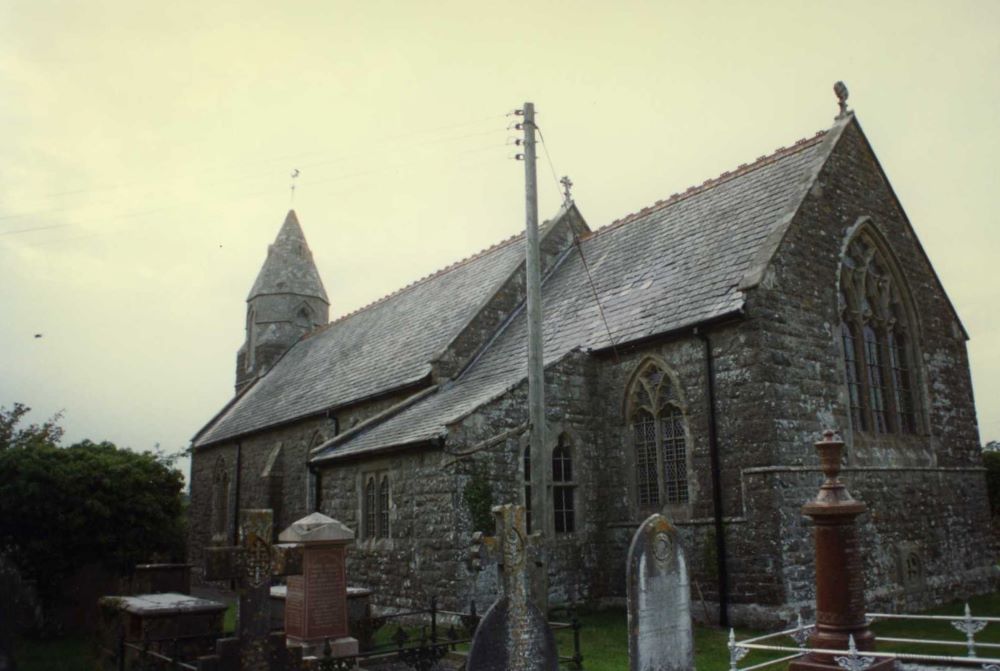 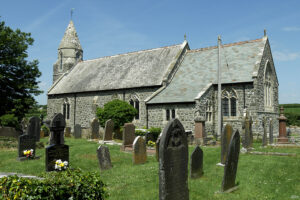 19th century church; 0% medieval core fabric. On site of, but not in same location as, medieval church (PRN 5240).

St Cain, Llangain, is a multicell church of medium size. It was new built in 1871 to the designs of the architect R. J. Withers of London (Williams, n.d., 28) on the same site, but c.10m to the north of its predecessor (PRN 5240). Nothing was retained from the earlier fabric.

The present church consists of a 2-bayed chancel, a 3 bayed nave, a north porch, a 2-storeyed west tower/turret with a spire, and a single-bayed vestry south of the chancel west bay. Construction is in limestone rubble; the interior is plastered. All dressings are in grey oolite and from 1871; the openings are neo-gothic comprising cusped 2-light windows with curvilinear tracery. The nave is buttressed. The west tower/turret exhibits 2 offsets up to an octagonal broach spire, in grey oolite also from 1871, with 4 openings. The roofs are slated gables; the vestry has a slated lean-to roof. The floors are suspended except in the porch.

The church was apparently ‘dilapidated’ in 1871 when the present church was built c.10m to the north, to the designs of the architect R. J. Withers of London (Williams, n.d., 28); it appears that the churchyard reduced to its present size at the same time (NLW, Llangain, Tithe Map, 1842). The new church was restored in 1978-9 when it was repointed throughout, partly refloored, reseated and repaired (Williams, n.d., 13).

The font served as a flower-pot in the churchyard in 1917 (RCAHM, 1917, 149) but was returned to the interior of the church during the restoration of 1979 (Williams, n.d., 15). The bowl is octagonal and carries a representation of  the circumcision of Jesus – it may be early 13th century..

There is no physical evidence for the earlier church, which appears to have lain beyond the present southern churchyard boundary (NLW, Llangain, 1842). There is neither an external cutting nor a drain. The floors are suspended over heating ducts. No external memorials lie significantly close to the church.

St Cain, Llangain, was not a parish church during the medieval period (Rees, 1932), but a chapelry of the medieval Deanery of Carmarthen. It was granted, as ‘Eglwysgain’, to the Augustinian priory of St John at Carmarthen, by one Arthur Drue, c.1150 (Williams, n.d., 10). In a list of the possessions of Carmarthen Priory of 1395 it is referred to as Maenorgain Chapel (ibid.).

At the dissolution, the advowson fell to the crown but found its way into private patronage; in 1833, when it was endowed with £800 royal bounty, the patron was F. Bludworth Esq. (Lewis, 1833).

The parish amalgamated with Llanllwch parish in 1977; they were later joined by Llangynog.

In 1998 St Cain, Llangain, was a parish church. The living was a vicarage, held with Llanllwch and Llangynog (Benefice no. 803) in the Archdeaconry of Carmarthen, Rural Deanery of Carmarthen (St Davids, 1997-8).