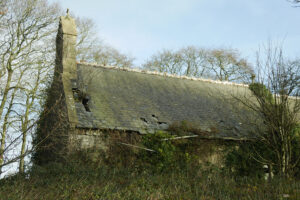 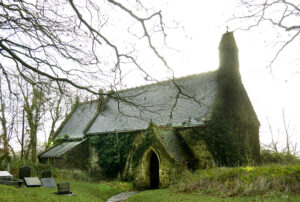 Reason for listing: Included as a mid C19 church with some surviving medieval features.

Archaeological potential – good. Shallow-deep earth cutting parallel to, and against, 50% of church; suspended floors above a void in 50% of church.

The present church consists of a 2-bayed chancel, a 3-bayed nave, a north porch, and a single-bayed vestry north of the chancel west bay. Construction is in squared and coursed limestone and Old Red Sandstone rubble. There are extensive remains of external render, from 1820-1860; the interior is plastered. Openings are neo-gothic, from 1882, and include ‘Early English’ lancets and windows with simple plate tracery; dressings are in yellow oolite. The south wall has a single external buttress, from c.1860. The nave west bay carries a shouldered, gabled single bellcote from 1882. The nave east gable carries a disused chimney, also from 1882. Roofs are slated gables; the vestry has a slated lean-to roof.

The church is said by Lewis and his derivitors to have been ‘rebuilt’ in 1820 as ‘a neat modern edifice, consisting of nave and chancel’ (Lewis, 1833). However, Glynne’s description of 1856 is that of a fundamentally medieval church, possibly even down to the roof timbers (Glynne, 1898, 363). It was a single cell, without a chancel arch or porch, entered through a west door ‘of rude construction, but a pointed arch’, and through a ‘rude’ south door. The west and north walls were blind, the east window was ‘square-headed, of 2 lights, and late character’ (but nb. apparently pre-1820) and the south wall windows (both in the ‘nave’) were ‘modern’. The gabled western bellcote had ‘2 arches, with bells’. His description of the ‘cradle roof, but without bosses’ appears to refer to a late medieval wagon roof, although Llangan is outside the area (North-east Carmarthenshire and Ceredigion) within which surviving examples are more-or-less confined. The exterior was whitewashed.

It was apparently ‘rebuilt’ again in c.1860 (Lewis, 1975, 144) and fundamental differences are apparent between Glynne’s description and a drawing of the church made prior to the 1882 restoration (NLW, SD/F/346). The Victorian, moulded chancel arch had already been inserted, with corresponding buttresses, the south door (and possibly the west door?) had been blocked, and a window had been inserted through the north wall. The church had, however, become disused by the 1870s (Anon., 1875, 409) when it was described as a ‘poor and dilapidated structure’.

The church was restored in 1882 (NLW, SD/F/346) to the designs of the architect Stephen Lewis, of Haverfordwest. The vestry and north porch were added. The east wall was rebuilt. The church was refenestrated, and the north door (re)built. The bellcote was rebuilt. A piscina was inserted. the church was reroofed, refloored, replastered and reseated. There appears to have been no further major alteration.

The font has an octagonal bowl that may be 14th century; the stem and base are from 1882 (ibid.).

A shallow-deep earth cutting runs parallel to, and 2m north of, the north wall, and against the west wall, secondary?. Floors are suspended above a void in the nave and vestry. No external memorials now lie significantly close to the church, but many former memorials have been moved.

Reason for listing: Included as a mid C19 church with some surviving medieval features.

The well-known ECM, ‘Canna’s Chair’ (Dyfed PRN 3734; SAM Pe 148) lies within the field immediately north-east of the church (Barnwell, 1872, 235-7; RCAHM, 1925, 169), adjacent to a spring, ‘Canna’s Spring’ (Dyfed PRN 3735). Both lie within the arc of a larger, concentric outer enclosure (Dyfed PRN 12591) which also contains a second enclosure (Dyfed PRN 11786), which have been recognised as cropmarks from aerial photography undertaken by Dyfed Archaeological Trust (Various, 1994, 404). Llangan is regarded as an important pre-conquest religious site.

There is very good evidence for the pre-conquest religious use of the site:-

St Canna, Llangan, was a parish church during the post-conquest period (Rees, 1932), of the medieval Deanery of Carmarthen. It was a possession of the Bishops of St Davids, as a prebend of St Davids Cathedral, rated in the king’s books at £7 (Lewis, 1833).

In 1833 the living, a discharged vicarage in the patronage of the Bishop, was rated in the king’s books at £3, endowed with £400 royal bounty and £1200 parliamentary grant (Lewis, 1833). Two thirds of the tithes belonged to the prebendary, and the vicar took one third (ibid.).

In 1998 St Canna, Llangan, was a parish church but was closed. It was held with Whitland, Cyffig and Henllan Amgoed (Benefice no. 826) in the Archdeaconry of Carmarthen, Rural Deanery of St Clears (St Davids, 1997-8).

The parish of Llangan is divided between Carmarthenshire and Pembrokeshire but the church lies in ‘Llangan West’, ie. within Pembrokeshire.