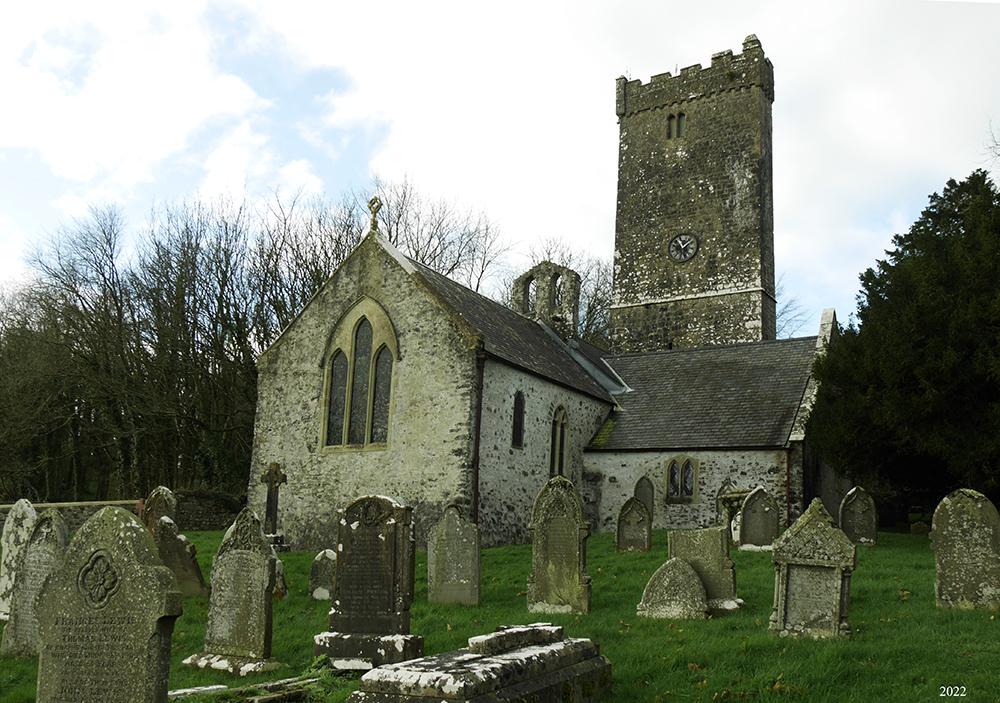 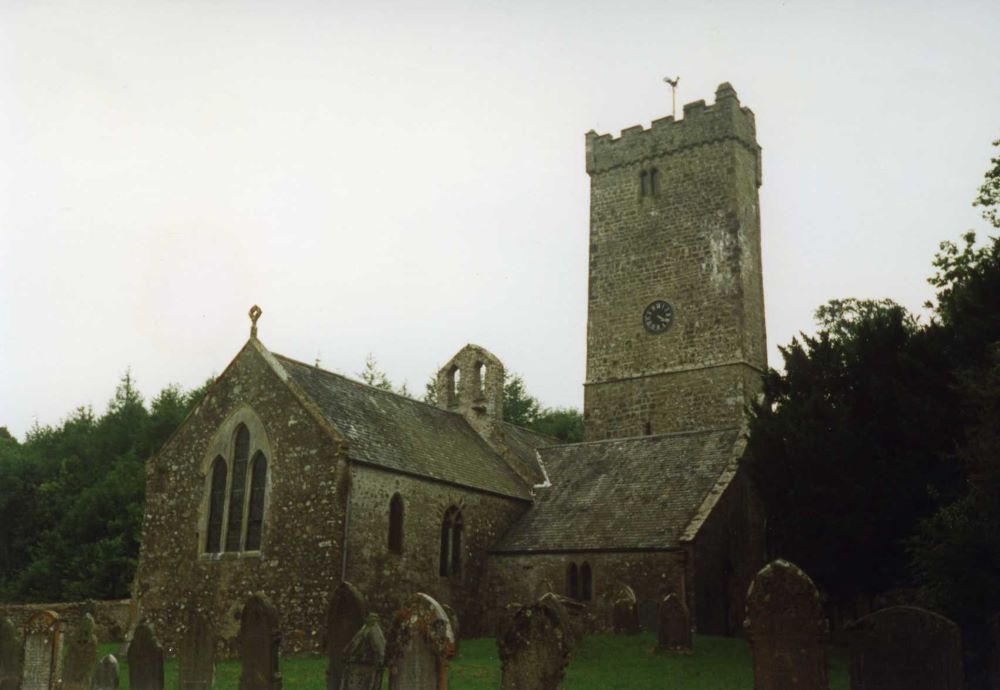 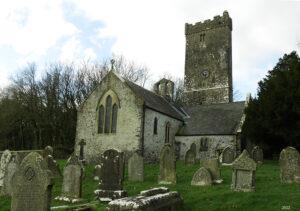 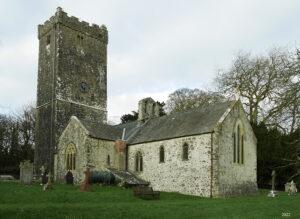 Reasons for Listing: Listed as a fine mediaeval church and tower; well restored in the late C19 and containing fittings of high quality.

The present church is cruciform and consists of a 3-bayed chancel, a 3-bayed nave, a 2-bayed north transept with a skew-passage, a single-bayed south transept, a north porch, a 4-storeyed west tower, a single-bayed vestry in the angle between the north transept and its skew passage, and a below-ground heating chamber south of the chancel west bay. Construction is in local limestone rubble. Medieval chancel, transept and tower arches, and some windows, with Old Red Sandstone and limestone dressings; other openings are mainly from 1886, in neo-Gothic (Early English) style, with grey oolite dressings. Pointing is mainly from 1886, but the tower was repointed in 1986; the interior is plastered. The tower is barrel-vaulted. Roofs are slated gables; the vestry and heating chamber have slated lean-to roofs (synthetic in the heating chamber) and the tower has a slated pyramidal roof (not seen).

There is a medieval effigy, and good 17th-18th century memorials.

The chancel south wall leans out above the level of a crack. The east window is an uncusped, graduated triple-lancet, with an overall 2-centred drip-mould,  from 1886. There are 2 large, cusped single lancets in the south wall, and one in the north wall, in chamfered Old Red Sandstone from the earlier 14th century, re-exposed and restored in 1886. To the west, both side walls have cusped, 2-light windows in 2-centred surrounds with quatrefoliated spandrels, with infill, from 1886. A trefoil light from 1886 lies above the skew passage arch in the north wall of the west bay. Internally, the east bay south wall features a piscina with a plain cusped recess, and a similar double sedilia, which may both also be earlier 14th century; plain square medieval aumbries lie in the east and north walls of the east bay. The plain, semicircular chancel arch is from c.1200; to the south is a plain, square squint, with an irregular outline, inserted in the 14th century, and there is a rood-loft corbel on the nave north wall. The upstand above carries a double, gabled sanctus bellcote with 2-centred openings, late medieval but now empty. The softwood roof is from 1886 and has collar-rafter trusses arch-braced from wall-plates, matchboarded above. The tiled floor is also from 1886.

The nave is entered through the north wall of the central bay, through a doorway with a plain 2-centred head, probably from the 13th century; a similar, blocked south door lies in the opposite wall. To the east of the north door is an internal stoup with a triangular-headed recess, from c.1200?. The west bay is lit by an uncusped, triple-lancet in a  2-centred surround, from 1886, in the north wall, and a cusped, 2-light window in 2-centred surround with a quatrefoliated spandrel, also from 1886, in the south wall. Immediately west of the latter is an area of blocking, former window?. The nave roof is like that in the chancel and similarly from 1886; the creasing for an earlier, higher-pitched roof can be seen on the east wall of the tower. The passages are tiled, from 1886 but over heating flues inserted in the earlier 20th century, with suspended board floors.

The north transept is entered from the nave through a plain, 2-centred medieval arch, and is lit by a cusped 3-light window with Geometric tracery in the north wall, from 1886 but with a drip-mould that possibly retains some medieval fabric. There is also an uncusped 2-light window, with triangular heads, from 1886, in the west wall, and a single lancet in the east wall the embrasure of which, at least, is medieval, but with a much-restored surround. The transept is both roofed and floored as the nave. It communicates with the chancel via a skew-passage that is now concealed from the exterior by the vestry; it opens as depressed segmental arches that reflect the profile of its vault. Its outer wall features a cusped, 2-centred tomb recess from the 14th century containing a contemporary, damaged, limestone effigy of a knight.

The south transept is entered from the nave through a similar plain, 2-centred medieval arch, and is lit by a cusped 3-light window with Geometric tracery in the south wall, in yellow oolite (from 1886? or later?)  but with an ?earlier limestone drip-mould on human mask stops. There is also a single lancet in the east wall the embrasure of which, like that in the north transept, is medieval, but with a much-restored surround. A door in the west wall, inserted in 1886 with a 4-centred surround, leads into the churchyard.. Internally, the east wall features a square tomb recess with a chest tomb of variegated marble, from 1809, with the arms of Barlow and Cresigny (Lewis, 1833). The transept is both roofed and floored as the nave.

The west tower, comprising 4 storeys in squared and coursed limestone rubble, is typical of the region, but of rather better quality, and is late – from c.1600. It is slightly tapered and has the ‘typical’ external batter and string-course, but does not feature a west door. A square spiral stair turret projects from the eastern half of the north wall, entered through a plain, segmental-headed doorway, c.1600, and lit by simple loops. The 2-centred arch from the ground floor into the nave reflects the profile of the 2-centred barrel vault from c.1600, which has a central bell-raising port. The west wall is pierced by an uncusped, 3-light window, with segmental heads in a square surround and a straight, plain label, rebuilt in chamfered limestone, with infill, in the 20th century but probably in imitation of an original of c.1600; the outer arch is tall and 2-centred. There is a suspended board floor. The second stage is lit by a simple, square-headed light in the east wall, from c.1600; there is a similar light in the north wall of the third stage, from which the second stage is divided externally by an plain string-course. The belfry stage has 2-light openings with uncusped semicircular heads, in chamfered limestone from c.1600, in all 4 faces. The crenellated parapet lies on an external corbel table, from c.1600, with low, plain pinnacles at the corners, the north-eastern of which incorporates the head of the spiral stair. The pyramidal tower roof is slated (Nicholas, 1994, 4).

The vestry is from 1886 and adjoins the north transept, through the east wall of which it is entered via a contemporary doorway with a plain 2-centred head. It is also entered from the churchyard through a 2-centred doorway in the north wall, and is lit by an uncusped double-lancet window in the east wall, both also from 1886. The softwood lean-to roof, from 1886, continues the transept roof eastern slope; the floor is also from 1886.

The north porch was added in 1896 in limestone ashlar; it adjoins the west wall of the transept and has a stepped buttress at the north end of its west wall. The contemporary doorway has a 2-centred, double-chamfered surround; to the east of the door is a square light, also from 1896, and the west wall is pierced by a contemporary double-lancet window. The softwood roof, from 1896, lacks trusses. The floored is tiled like the nave passages, but from 1896.

The heating chamber was excavated in the angle between the chancel and the south transept in the earlier 20th century. It is largely below-ground but there are low rubble walls to the south and east, with a plain, square doorway in the east wall. A flue in the dividing wall with the south transept leads into a square, brick chimney-stack. The softwood lean-to roof lies against the transept wall.

A slight external cutting runs around the north porch and the tower north wall; a shallow, concrete-lined drain surrounds the church. The heating chamber is below churchyard ground level. Floors are suspended above heating ducts. Few external memorials lie significantly close to the church.

The semicircular chancel arch appears to be original and suggests an early date for the nave, c.1200, although the doorways may be somewhat later. The chancel windows are early 14th century in style and may indicate a rebuild/extension of the chancel. The north and south transepts are probably also 14th century, but not contemporary; the north transept has a skew-passage while the south transept merely has a squint. The west tower can be given, on stylistic grounds, the late date of c.1600; it is similar to the slightly earlier tower at Begelly, Pembs.. The vestry, north porch and heating chamber are 19th-20th century additions (see below).

A restoration was undertaken in c.1860 when an 18th-early 19th century timber gallery was removed, the (contemporary?) timber window frames were replaced by masonry surrounds, plaster ceilings were introduced and the interior was reseated (Cadw, 1997, 11). In 1867 Glynne thought the church too modernised (Glynne, 1888, 137); he noted that the northern skew-passage was blocked but was able to view the effigy.

A photograph of 1871 (NMR, 900175/7) shows the east end of the church prior to the second, main restoration; some restoration had, however, already been undertaken. A vestry occupies the site of the present vestry with which it is similar is scale and form; it probably dates from the early-mid 19th century. The present north window of the north transept may be shown; a similar, 4-light window occupied the chancel east wall; alternatively, both windows depicted may have been medieval. The medieval chancel windows were still blocked.

The church was restored again in 1886 (HPR/42/24) to the designs of the architect T. G. Jackson, when the vestry was rebuilt and the church was refenestrated, including the re-opening of the medieval chancel windows, sedilia and aumbry. The plaster ceilings were removed and the church was reroofed and the interior was refloored, reseated and replastered. The construction of the present north porch was anticipated, but not executed until 1896, to Jackson’s design (NLW, SD/F/225).

The heating chamber, and underfloor heating ducts, are from the early 20th century; the heating apparatus is now oil-fired, with an external oil tank.

The limestone font has a square bowl and stem, 12th century?, retooled?.

St Caradog, Lawrenny, was a parish church during the post-conquest period (Rees, 1932), of the medieval Deanery of Pembroke. The rectory appears to have been in private patronage from the earliest date and, by 1594 at least, was appendant to the Manor of Lawrenny (Green, 1912, 225). The church was, in 1291, assessed at £8 (ibid.).

The Manor of Lawrenny and the patronage of St Caradog were held by the Wogans of Wiston in 1594 (ibid.), but by the later 17th century both had passed to the Barlows of Lawrenny Castle. In 1833 the living was a discharged rectory, in Barlow patronage and rated in the king’s books at £13 (Lewis, 1833).

In 1998 St Caradog, Lawrenny, was a parish church. The living was a rectory, held with Martletwy, Minwear, Yerbeston and Templeton (Benefice 816) in the Archdeaconry of St Davids, Rural Deanery of Narberth (St Davids, 1997-8). 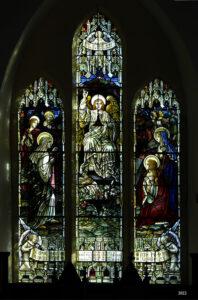 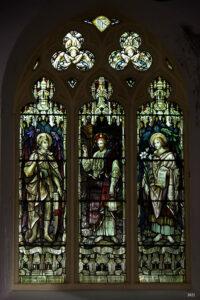 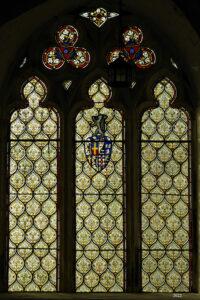 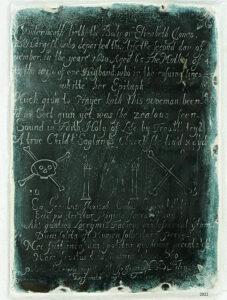