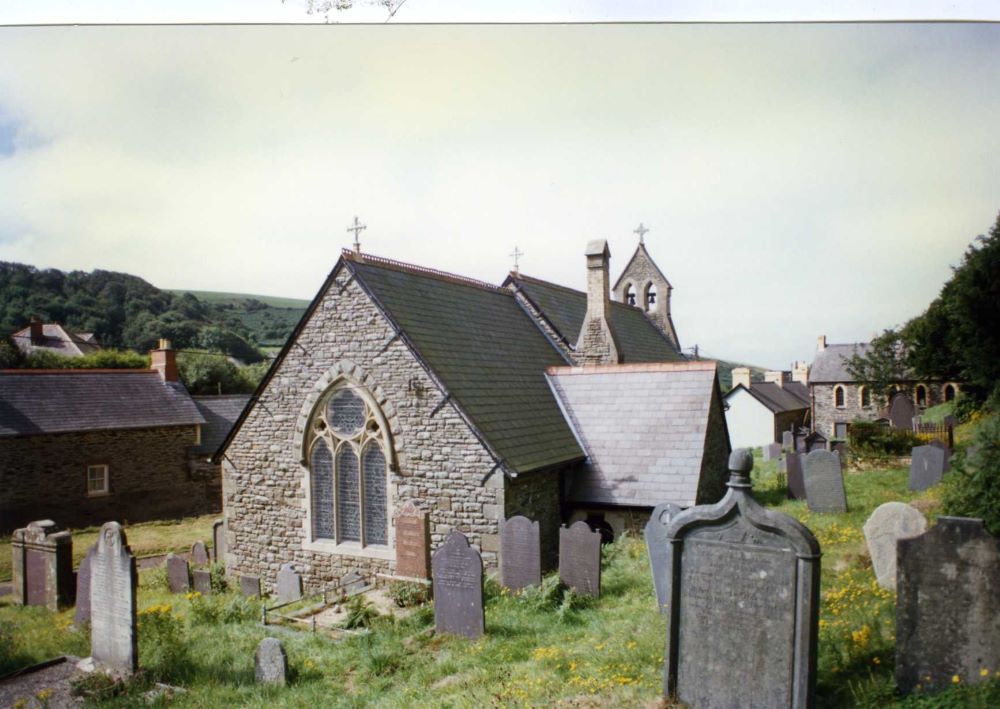 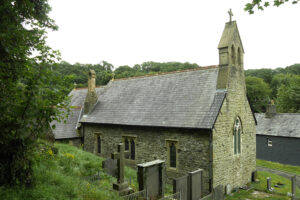 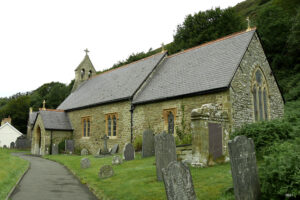 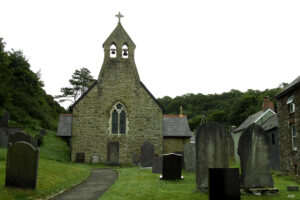 Archaeological potential – very good. Deep cutting around 40% of church; suspended floor, and heating ducts, in 50% of church; external burial vault lies against (and below?) 10% of church; further memorials lie significantly close to 30% of church.

The present church consists of a 2-bayed chancel, a 3-bayed nave, a south porch and a transeptal, single-bayed vestry north of the chancel west bay. Construction is in yellowish sandstone rubble throughout. All dressings are in yellow sandstone and from 1884; the 2-centred openings are neo-gothic and the 2-light windows are cusped, with simple tracery. There is a simple, gabled double bellcote at the west end. The vestry has a fireplace and chimney. The roofs are slated gables throughout. The floors are suspended except in the porch.

The earlier church was described by Meyrick in 1810 as consisting of nave and chancel; the chancel arch was pointed, with surviving rood-loft steps, and there were the remains of a west gallery (Crossley and Ridgeway, 1946, 53). In 1833 it was called a ‘neat plain edifice, without tower or spire’ (Lewis, 1833). The tithe map of 1841 (NLW, Llangranog, 1841) shows a simple rectangular cell in the same location as the present church. In a fuller description of 1855 it was ‘a small church of common Welsh type, greatly modernised…the walls low and whitewashed, no north windows – nor west – the others modern and wretched’ (Glynne, 1898, 352-3). Doubt was cast on the chancel arch being original, the bellcote was ‘modern’, and there was ‘scarcely any vestige of the original work to be seen’ (ibid.). Evans, 1915, features an illustration of the church ‘before 1884’ as a single cell; there are four 2-light windows in the south wall, apparently with tracery, and a similar 3-light east window with 2 narrow loops above; the bellcote is single, simple with a ball-finial (Evans, 1915, 32).

There is a deep cutting along the north side of the church; there is no external drain or cutting around the remainder of the church. The nave floor is suspended over heating ducts. An external burial vault lies against (and below?) the chancel south wall; further memorials lie significantly close to the south and east walls.

The font has an octagonal bowl with vertical roll-mouldings, a cylindrical stem and base, all from one piece. It is probably early 13th century.

St Carannog, Llangranog, was not a parish church during the medieval period (Rees, 1932), but a chapelry of Llandysiliogogo parish in the medieval Deanery of Sub-Aeron. It was in the patronage of the Bishops of St Davids, and by 1287 its tithes went towards the stipend of the Treasurer of the diocese (Evans, 1915, 33). It appears to have become a parish church in the 16th century.

The patronage was unchanged in 1833 when the living, a discharged vicarage annexed to that of Llandysiliogogo, in the Archdeaconry of Cardigan, was endowed with £600  parliamentary grant (Lewis, 1833).

In 1998 St Carannog, Llangranog, was a parish church. The living was a vicarage, held with Llandysiliogogo and Penbryn (Benefice 830) in the Archdeaconry of Cardigan, Rural Deanery of Glyn Aeron (St Davids, 1997-8).