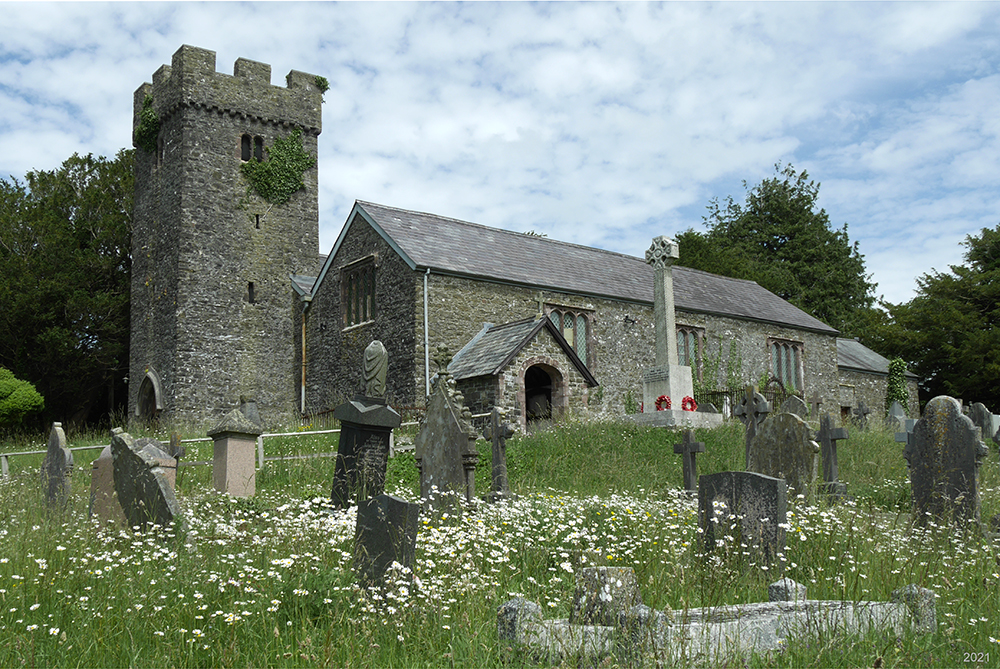 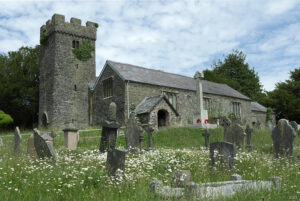 Archaeological potential – good. Deep, narrow external cutting around 15% of church, secondary; suspended floors over heating flues in 60% of church; below-ground heating chambers in 15% of church; known burials beneath 25% of church; many external burial vaults and memorials significantly close to 100% of church.

The present church consists of a 3-bayed chancel, a 3-bayed nave, a 3-bayed south chapel, a north transept, a 3-bayed south aisle, a south porch a 3-storeyed west tower and a coalhouse north of the tower. Construction is in limestone rubble. There are some early 17th century dressings, in limestone; other dressings are in yellow oolite, neo-Gothic, from 1868, and red sandstone, neo-Perpendicular, from 1899. There are extensive remains of 18th – early 19th century external render, with 20th century ribbon pointing over; the interior is plastered. Roofs are slated gables, the tower roof was not seen.. The church features a good early 17th century dresser tomb and many 18th – early 19th century memorials.

The upper courses of the chancel north wall, and the east gable were rebuilt/heightened in 1899, along with the east window and its infill; the 3-light window has a 2-centred moulded rear hoodmould on acanthus stops, a 2 centred surround and drip-mould and neo-Perpendicular tracery in red sandstone. Internally, beneath the window is a shelf, on moulded corbels in red sandstone, all from 1899. The moulded chancel arch is also in sandstone from 1899, with imposts and bases. The softwood roof is from 1899, and has king- and princess-posts trusses braced from ‘hammer-beams’ on the wall-plate, with bosses and carved fretwork between the braces. The passages have glazed tiles, with suspended woodblock floors also from 1899; there is burial beneath the altar.

The upper courses of the nave north wall were rebuilt/heightened, and 2 windows were inserted, with infill, in 1899. The windows are probably imitations of early 17th century originals and have 3 lights with depressed 2-centred heads and sunk spandrels in square surrounds with chamfered labels, all in red sandstone. The west end of the wall features much poor quality repair of its facework, 20th century. The nave roof is from 1868, concealed by a contemporary curved, plaster ceiling. The passages are tiled over heating flues, with a chamber for a ‘Porritt’s’ stove beneath the west bay, and the boarded floors are suspended; all from 1868.

The south chapel communicates with the chancel through a 2-bayed arcade of moulded, 2-centred arches, with hoodmoulds, on octagonal piers with plain abaci and tori, from 1899. The east wall is pierced by a 2-light window with Geometric tracery in yellow oolite, with surrounding infill, from 1868. The upper courses of the south wall have been rebuilt/heightened like the chancel and nave; the west bay features an area of blocking that represents the site of a window, probably from c.1600, that was blocked when the fine Jacobean dresser tomb of Bishop Rudd, with a classical arch, pediment, acroteriae, effigies and chest, in oolite, was built against the interior face in c.1616. To the west, the south wall is pierced by a doorway with a square head; above the door is an area of blocking terminated by a chamfered oolite label from c.1600 indicating that the present doorway is a later remodelling, from 1788? (see below). The west bay south wall displays a full-height area of blocking, lying between definite jambs, apparently representing a second doorway; the blocking contains some brick, and lies beneath the external render, and so the opening may be a secondary door blocked in ?1788 when the original door was reopened. The softwood chapel roof is from 1868. The flagged floor is pre-1868. The south chapel is known as the ‘Aberglasney Chapel’ and there are marked burials beneath.

The north transept is entered from the nave through a chamfered 2-centred arch rebuilt in 1868. The upper courses of the outside walls have been rebuilt/heightened as in the rest of the church and there is much 20th century repair work in the east wall facework. At the south end of this wall is a blocked window, visible internally as a segmental-headed recess, medieval, and represented externally by an amorphous area of blocking with some brick, from the late 18th – early 19th century. To the north is an internal aumbry or piscina with a plain, 2-centred head, medieval, 14th century?; externally is a shallow recess with a memorial slab from 1798. The transept is now lit by a 2-light window in the north end wall, like the chancel east window but 2-light, with infill, from 1899. The transept is entered from the churchyard through a doorway with a plain, 2-centred head, post-1899?; to the south the same wall exhibits a blocked doorway with a low segmental brick head from the late 18th – early 19th century, with render over the blocking, blocked in 1813? (see below). The transept is ceiled and floored as the nave, 1868. The north transept is known as the ‘Cadfan Chapel’.

The south aisle communicates with the nave via a 3-bayed arcade of chamfered, 2-centred arches on similar piers, from 1813 (Anon., 1925, 461); the westernmost respond is original and from the early 17th century. The plain, 2-centred arch into the south chapel is contemporary. The aisle absorbed a 14th century south transept, and to the south of this arch the east wall of the east bay contains a contemporary piscina ‘of interesting character’ (Anon., 1925, 461), now concealed by the organ; the south wall features a 14th century tomb recess, similarly concealed (ibid.). The south and west walls have an external basal batter and have been poorly pointed since 1899. The south wall is pierced by 3 windows from c.1900, like those in the nave but possibly copying early 17th century originals. The south door has a 4-centred surround in roll-moulded red sandstone, possibly early 17th century (see below). The west wall gable was rebuilt in 1899 when the 4-light west window was rebuilt re-using the early 17th century red sandstone dressings; the depressed, 2-centred heads, sunk spandrels and square surround with a chamfered label are all like those in the nave windows but weathered and original. A below-ground boilerhouse, from 1899?, lies beneath the west bay, reached by a flight of 10 steps in a revetted cutting along the west wall, leading to a doorway with in iron lintel. The aisle is ceiled and floored as the nave, 1868.

The south porch finishes are like those in the aisle, with repairs of 1899 and the 20th century. The doorway has a 2-centred head from the early 17th century (see below). The porch is ceiled and floored as the nave, from 1868.

A small coalhouse was built against the north wall of the tower in 1899 or the earlier 20th century, of simple construction, entered from the churchyard through a simple square door in its west wall and lit by a similar timber-framed window in the north wall. It has a simple, slated lean-to roof up to the tower.

A deep, narrow revetted external cutting runs around the chancel north wall and the north transept east wall, secondary. Floors are suspended over heating flues in the nave, transept and aisle. There is a below-ground heating chamber in the nave. A heating chamber lies beneath the south aisle east bay with an external stairwell. Known burials lie beneath the chancel and south chapel. Many external burial vaults and memorials lie significantly close to all walls.

The nave and chancel may be 13th century but in the absence of original openings and chancel arch cannot be closely dated. The north transept is secondary as can be seen from the external joint between the two; an accompanying south transept has been absorbed by the south aisle but the contemporary piscina and tomb recess have been dated to the early 14th century (Anon., 1925, 461), the church, then, was cruciform. The west tower can probably be dated to the earlier 15th century and has a spiral stair turret like that at Llanfynydd, Carms., of similar date. The south chapel was added in c.1600 as a mortuary chapel for Archbishop Rudd, the occupant of the neighbouring Aberglasney Hall; the south aisle is thought to be contemporary with its early 17th century windows (ibid.) and may be also be Rudd’s work, but may be represented by the request, in 1619, that the patron repair the church (Anon., 1846, 370). The south porch, and a probable large-scale refenestration, are contemporary.

The windows were ‘out of repair’ in 1705 (Evans, 1918, 7). The late 18th and early 19th centuries were characterised by the usual expenditure of small sums on white-liming the church, mending windows, reslating etc. A gallery was present by 1782 when its windows was repaired (Carms. R. O., CPR/6/13). ‘Part of the church floor’ was flagged in 1786 (ibid.), and the ‘chapel door’ was given a new lintel in 1788 – the south chapel door? (see above). The tower crenellations were recoped in 1798 (ibid.). Some of the external render, and some blocking of openings eg. in the transept, are possibly contemporary.

The church was again restored in 1899, to the designs of the architect Stephen Williams of Rhyader (NLW, SD/F/347) and using red sandstone dressings. The chancel arch and the arcade between the chancel and the south chapel were rebuilt. The church was almost entirely refenestrated, possibly in imitation of early 17th century originals, and the original aisle west wall window was restored; the similar 17th century 4-light chancel east window was replaced to a different design. The wall-tops, and some gables were rebuilt or heightened. The chancel was reroofed and refloored. The ‘Porritt’s’ stove may belong to this period, or was replaced by the heating chamber beneath the aisle; the latter, however, and the coalhouse, may be rather later, as is the external north transept door.

The oak altar table is Jacobean, from the early 17th century. The softwood pews are from 1868, as may be the south chapel screen. The organ was introduced into the south aisle east bay after 1899 (NLW, SD/F/347). The simple stalls are later 20th century.

The octagonal oolite font is modern, probably from 1868; the earlier font, ‘a plain square basin with chamfered angles’, was observed lying loose in the church in 1917 (RCAHM, 1917, 157).

It remained a possession of the Prioress but the advowson was in the gift of the Bishop of Chester by the earlier 16th century (Anon., 1846, 370). The ‘rectory’ and tithes were let to a succession of individuals during the post-medieval period, mostly the owners of the neighbouring Aberglasney estate, but in 1713 the Bishop of St Davids ‘reserved the right’ of presentation (Anon., 1969, 68).

Aberglasney was occupied by Bishop Anthony Rudd of St Davids in the early 17th century which may provide a context for the extensive contemporary work at the church.

In 1998 St Cathen, Llangathen, was a parish church. The living was a vicarage, held with Llanfihangel Cilfargen and Llanfihangel Aberbythych (Benefice no. 800) in the Archdeaconry of Carmarthen, Rural Deanery of Llangadog and Llandeilo (St Davids, 1997-8).

The south chapel, known as the ‘Aberglasney Chapel’, is still a possession of the Aberglasney estate.