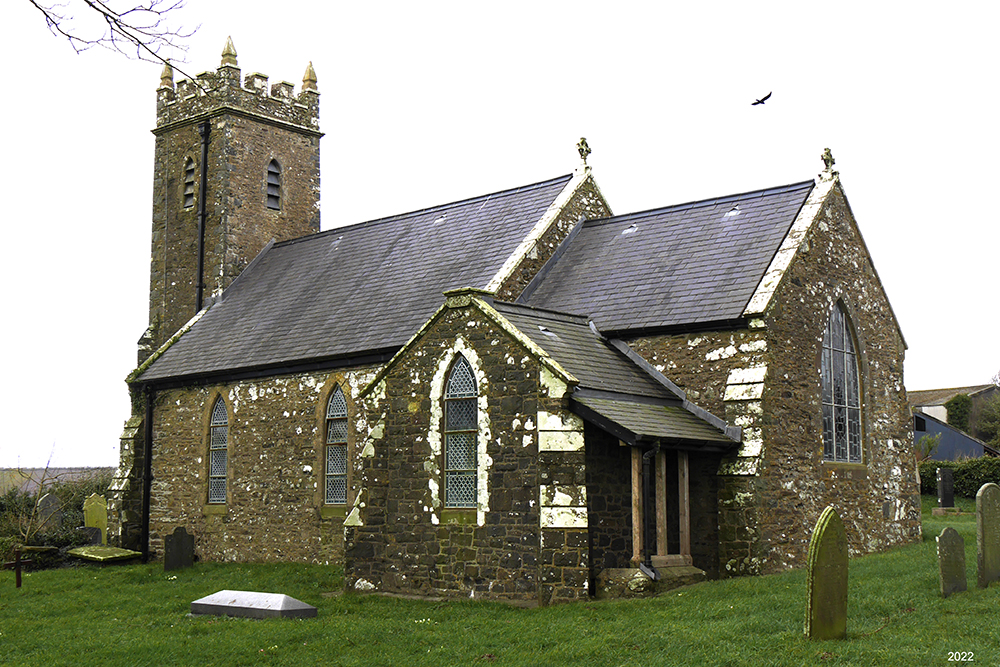 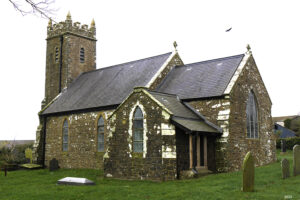 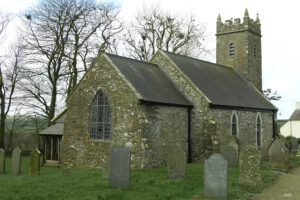 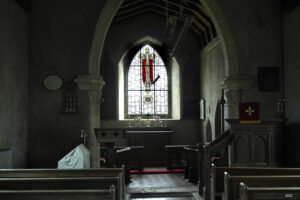 Reasons for Listing: Listed for for group value with Jordanstone Hall and for its interesting monuments, dating from 1617.

Archaeological potential – good-very good. Church entirely rebuilt in 1797, in same location as earlier church and above its foundations, and restored in 1863; no physical evidence for pre-1797 church; slight platform beneath 50% of church; external shallow concrete drain around 100% of church; no evidence for floor level changes; underfloor void; cellar beneath 20% of church; no further crypt/vault evident; no evidence of former components beyond church; memorials significantly close to 25% of church.

St Cawrda, Jordanston, is a 3-celled church, of medium size. It was (re)built in 1797 by an unknown architect (Jones, 1994, 1), on the same location as the medieval church but no earlier fabric was retained. It was restored in 1863.

The present church consists of a 2-bayed chancel, a 3-bayed nave, a west tower, with the main entrance, and a transeptal vestry of 1 bay, against the south wall of the chancel east bay.

The chancel and nave are constructed is in limestone rubble throughout, unsquared but roughly coursed and without true quoins, all of 1797. The external pointing is from 1911. The internal walls are rendered/plastered. All dressings are in oolite, from 1863 and neo-gothic, and include the chancel arch and plain 2-centred windows and doors. The external buttressing is also of 1863. The roofs are slated gables, the nave at a higher level than the chancel, from 1863?.

The 1797 church was described as a ‘small, neat edifice’ in 1833, but ‘not distinguished by any interesting architectural details’ (Lewis, 1833).

The west tower is of similar construction, but all from 1863. It has 3 storeys. The main entrance to the church occupies the ground door, and is a plain 2-centred arch. The belfry openings are as in the chancel and nave. The corners are angle-buttressed, and the tower is pinnacled and crenellated, all with oolite dressings and all apparently from 1863, although the tower was restored in 1880 (Cadw, 1995, 4). The roof was not seen. The vestry is similarly from 1883, and of the same construction including the openings. It is transeptal, with a slated gable roof at a lower level than the nave roof, from 1863?. It lies over a basement that is partly below-ground; an outside doorway is reached up an external flight of steps. The floor is suspended, from 1863?.

The church underwent some low-impact restoration in 1910. It was ‘put into good repair, and…the architectural peculiarities of the old building have been preserved’ (Anon., 1911, 155). There is little field evidence for this restoration, which may have been purely superficial and confined to repairs, finishes, fittings etc., but may have included the roofs. The tower underwent some further restoration, including repointing, in 1997.

There is no physical evidence for the pre-1797 church. A slight platform lies south of the church, its low scarp slope running parallel, and may represent primary made ground on the slight downhill slope in the yard. A shallow, concrete-lined external drain runs around the entire church, from 1911?. The southern vestry overlies a basement below yard level. There is no evidence for internal floor level changes, but an underfloor void is present beneath the suspended floors. No vault or crypt is evident. There is no evidence for any former components beyond the present walls. Some memorials lie significantly close to the south walls.

In 1998 St Cawrda, Jordanston, was a parish church. The living was a vicarage, held with Mathry, St Edren’s, Granston and St Nicholas (Benefice 655) in the Archdeaconry of St Davids, Rural Deanery of Dewisland and Fishguard (St Davids, 1997-8).

St Cawrda(f) has traditionally been the Jordanston dedication; the saint has mainly North Welsh connections and there is only one other dedication in West Wales, at Llanwrda, Carms. (Yates, 1973, 67). Rees, 1932, has the church dedicated to St Mary.

Only one stained glass window.