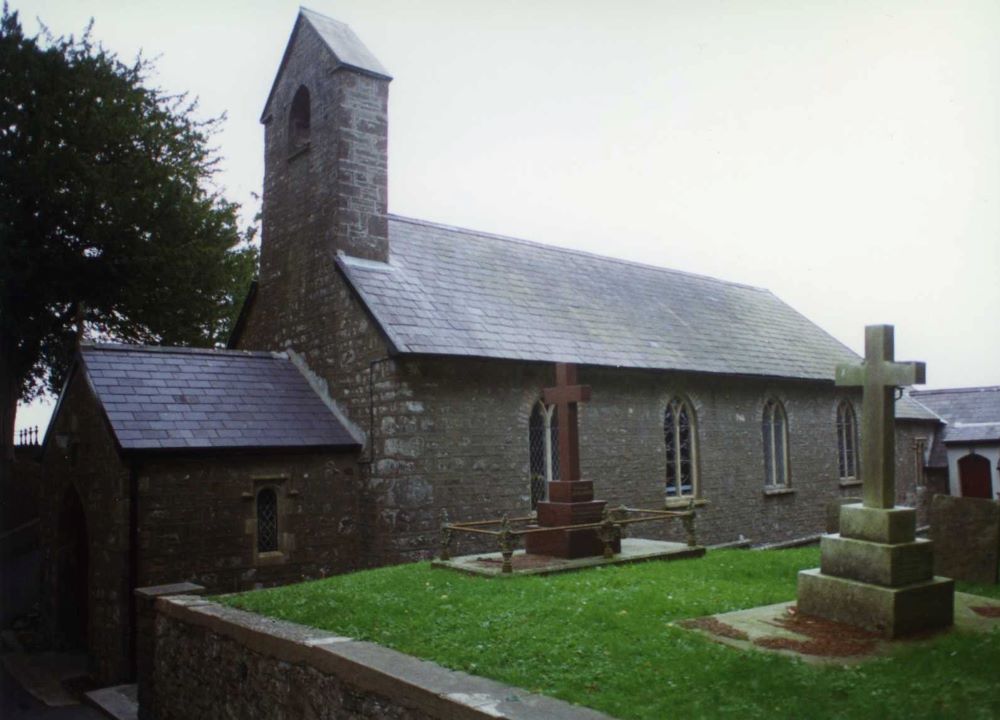 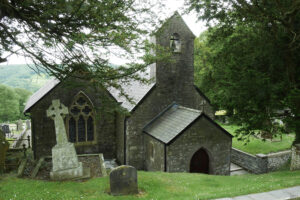 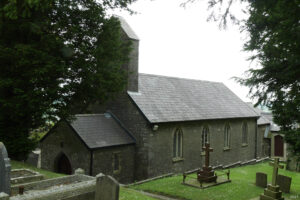 Reason for Listing: Listed for its special historic interest as a medieval hilltop church with distinctive Georgian style interior and good C19 and C20 detail.

The present church consists of a 2-bayed chancel (formerly north chapel), a 3-bayed nave (formerly north aisle), a 2-bayed south chapel/vestry (formerly chancel), a 4-bayed south aisle (formerly nave), a west porch, a single-bayed transeptal vestry south of the chancel east bay and a coalhouse/boilerhouse east of the vestry. Construction is in limestone and Old Red Sandstone rubble throughout; dressings are mainly grey oolite and from the l840s but there was extensive use of brick heads in c.1816. Pointing is mainly cement-ribboned and from the 20th century; the interior is plastered except in the west porch. Roofs are slated gables; the coalhouse/boilerhouse has a slated lean-to roof.

The chancel east window opening has a 2-centred brick head from c.1816; the cusped, 3-light window is from the ?1840s when the lower half of the opening was blocked. There is an uncusped 2-light window, and a double-lancet window, in the north wall; both are from the later 19th century but may use earlier openings. The arcade into the south chapel/vestry is from 2 phases; the west bay is a chamfered 4-centred arch from the earlier 15th century while the east bay is a plain segmental arch from the later 15th century when the chancel (originally a north chapel) was extended. The plain, 2-centred chancel arch is medieval. The roof timbers were not seen but the plaster ceiling, of 4 cants, is from the early 19th century. The artificial flag floor is later 20th century.

The nave walls have a slight external batter and there is a shallow, medieval buttress at the north end of the east wall. The 3 north wall windows have openings like the chancel east window, from c.1816, with 2 cusped lights from the 1840s; the west window tracery is like the chancel east window but within a masonry-headed opening, all from the 1840s.. The arcade into the south aisle is of 3 bays, with Classical columns on square bases supporting a plain pediment, all from the early 19th century.  Ceiled as the chancel, early 19th century, but with a semicircular profile. The passages are flagged as the chancel, later 20th century; the suspended board floors are presumably contemporary with the early 19th century seating.

The south aisle is lit by 4 windows in the south wall, like the nave windows but with simple Y-tracery from the 1840s. The west door has a chamfered 2-centred surround, in Old Red Sandstone, of 14th century appearance but probably rebuilt in the 19th century. There is a large, gabled, single bellcote at the west end with a semicircular headed opening, rebuilt from a double bellcote after the 16th century. Ceiled and floored as the nave.

The west porch is medieval. The doorway is similar to the nave west door but re-uses a voussoir of definite medieval date; there is an external square recess above, medieval?. There is a cusped single-light window in each side wall, mid-late 19th century but possibly in medieval openings. The gabled roof lies above a semicircular-profile barrel-vault, medieval. There are no internal finishes. The flagged floor lies directly on the substrate and is 20th century.

The vestry is later 19th century and has an external oolite basal offset. There is a double lancet window in the south, gable wall like that in the chancel north wall. The west wall doorway has a concrete surround from the 1990s. The lean-to boilerhouse lies against its east wall and has a plain square doorway in its south wall; it is all from the early 20th century.

The entire church lies within a cutting through the shale bedrock, which is very deep and wide in the west half and along the north wall; the cutting is primary but the present concrete and breeze-block revetment is later 20th century. A ?shallow, covered external drain runs around the church. There is no evidence for changes in floor level. There is an underfloor void and the suggestion of burial vaults below. External memorials lie significantly close to the east walls.

The demolition of the arcade between the nave and aisle and its replacement with Classical columns may belong to what appears to have been a major building campaign in 1815-28 (ibid.). A mason was paid for ‘putting up the pillar’ in 1828, while ‘bricks’ were used in 1816, possibly representing the refenestration of the church with the present brick-headed windows, which were then timber-framed. The present ceilings were in place by at least 1849 (Carms. R. O., CPR/3/23).

‘Rebuilding’ is referred to in accounts from the 1840s (ibid.), and the provision of ‘centres for the gothic windows’ when the present window surrounds were inserted.

The vestry appears to have been added rather later in the 19th century, which appears to represent the date that the nave and chancel were moved to the north half of the church, the south chapel was refloored and the organ introduced (see below). There was some refenestration in the chancel and south chapel

The passages and chancel were refloored with artificial flags in the later 20th century.

The early 19th century bow-pews have been retained, along with the contemporary ceilings, commandment plaques and creed, temp. the nave arcade (Yates, 1974, 66, 73). The large pipe-organ is from 1890. The pulpit is dated 1969.

The limestone font has a square bowl and base, with a cylindrical stem, and is 13th century in date.

A stone with an incised Greek cross  has been reset in a recess in the west porch; it may be post-Conquest.

St Ceinwr, Llangynwr, was a parish church during the medieval period (Rees, 1932), of the medieval Deanery of Kidwelly. According to Rees, 1932, the advowson was in the hands of the Lord of Maenor Cunnor, but in 1833 the patron was the Bishop of St Davids, the living being a discharged vicarage rated in the king’s books at £3, endowed with £200 private benefaction and £200 royal bounty (Lewis, 1833).

In 1998 St Ceinwr, Llangynwr, was a parish church. The living was a vicarage, held with Cwmffrwd (Benefice no. 686) in the Archdeaconry of Carmarthen, Rural Deanery of Carmarthen (St Davids, 1997-8).