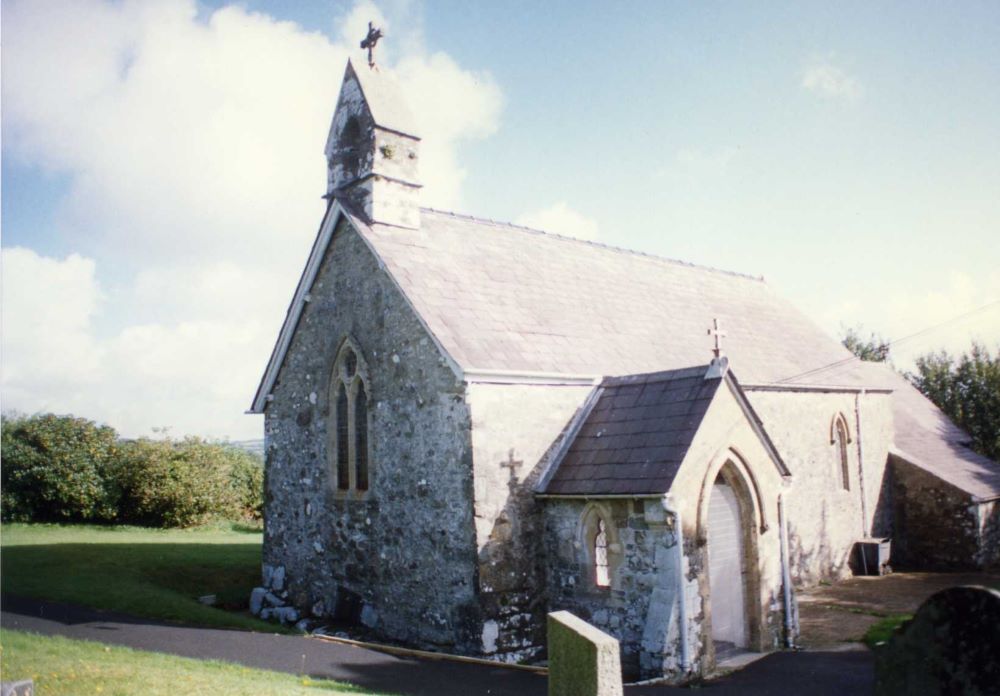 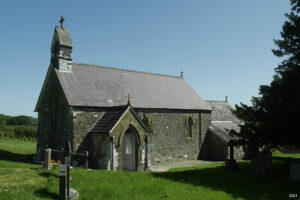 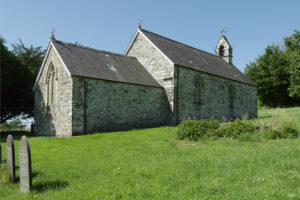 Reason for Listing: Listed as a simple rural church of ancient origin, with good stained glass and wall monuments, and for group value with the lych gate and the archway to Dolwilym.

The present church consists of a 2-bayed chancel, a 3-bayed nave, a south porch and a single-bayed vestry south of the chancel west bay. There may formerly have been a component north of the nave. Construction is in limestone rubble throughout. Pointing is from 1882 and obscures the facework; there has been some 20th century repointing and the interior is plastered. Roofs are slated gables; the vestry  has a slated lean-to roof. Floors lie above a void in the chancel, nave and vestry. A number of large ?prehistoric stones and/or ECMs have been re-used within the fabric; one, at the base of the west wall, is over 2m long and has a full-length groove, part of cross? artificially cut?, while another apparently displays ‘cup-marks’ (Lewis, 1975, 141).

The nave is lit by 2 windows in each of the side walls; all are cusped single lancets from 1882. The nave west window is similar to the chancel east window and also from 1882, as is the south door. A gabled, single bellcote, also from 1882, lies on the west gable and features a plain string-course. The softwood roof is from 1882 and has arch-braced, queen-post trusses carved into quatrefoils. The passages are flagged over a void and the suspended board floors may lie above flagging; all from 1882.

There is a deep, external earth-cut cutting along the nave north wall, continuing as a very deep, revetted cutting along the west wall and continuing to the south porch; primary?, secondarily deepened exposing footings. A very slight platform lies beneath the east end of the church, primary?, cut by a memorial from 1714. There is no evidence for changes in floor level. The flooring lies over a void in the chancel, nave and vestry. Few memorials lie significantly close to the east wall.

The nave and chancel are pre-19th century but cannot be closely dated. Lewis & Lewis, 1996, date the building to the 17th century, but do not cite their evidence; it appears more likely that the nave at least is medieval. The chancel is secondary, later medieval?; there is a joint between the nave and chancel walls and, moreover, the nave east wall exhibits a horizontal roof-crease at eaves level which may be for a former lean-to roofed chancel. The south porch and vestry are from 1882.

A truncated, detached block of masonry lies opposite the west end of the nave north wall and may represent part of a former buttress cut through by the secondary external cutting. However, the tithe map (NLW, Llanglydwen, 1845) appears to show a shallow, square projection north of the nave, to which this masonry may have belonged and which may represent a former component, a vestry?, of early 19th century date?.

The church was restored in 1882 to the designs of the architect E. H. Lingen Barker (Lewis, 1975, 141), not ‘entirely rebuilt’ as stated by RCAHM, 1917. The restoration was high impact; the church was refenestrated, reroofed and refloored and the present doors were inserted. The present vestry and south porch were de novo additions.

The free-standing softwood stalls are from 1882, as are the similar pews. The pulpit and altar table are 20th century.

The limestone font has a square bowl and cylindrical stem with cable moulding, from the 14th century; the base is modern.

Reason for Listing: Listed for group value with St Cledwyn’s Church and the archway to Dolwilym.

Documentary sources for the medieval church have the separate PRN 7397.

At the dissolution, the advowson fell to the crown but found its way into private patronage; in 1833 the living was a discharged rectory, rated in the king’s books at £2 13s 4d, endowed with £200 royal bounty and £200 parliamentary grant, in the patronage of the king as Prince of Wales (Lewis, 1833).

In 1998 St Cledwyn, Llanglydwen, was a parish church. The living was a rectory, held with Llanfyrnach (no benefice no.) in the Archdeaconry of Carmarthen, Rural Deanery of St Clears (St Davids, 1997-8).