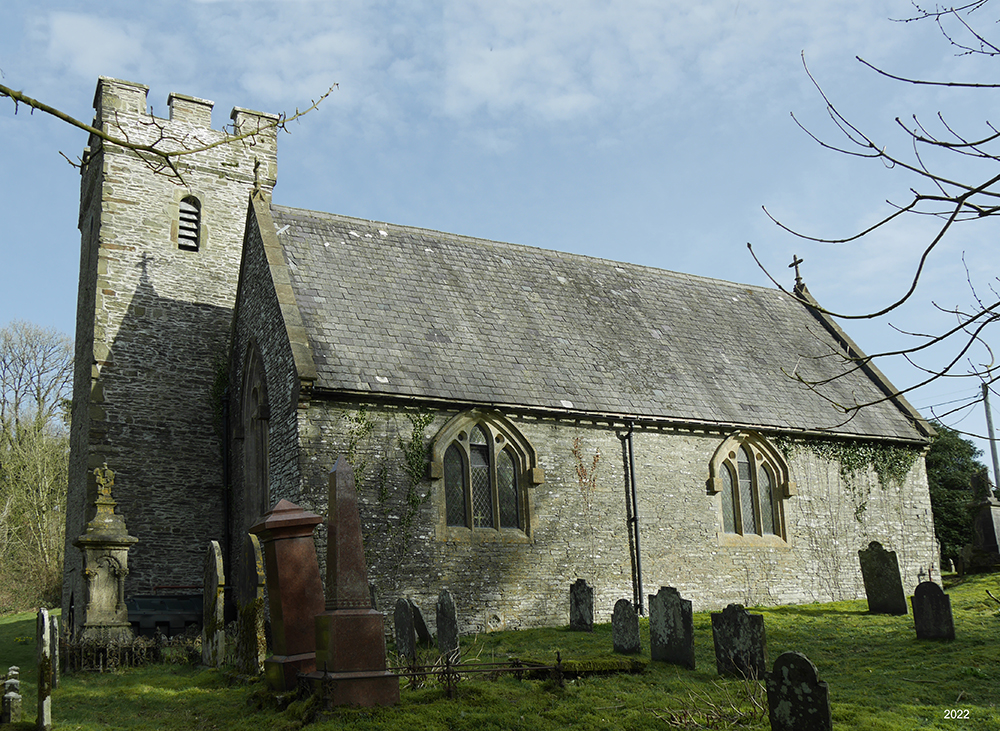 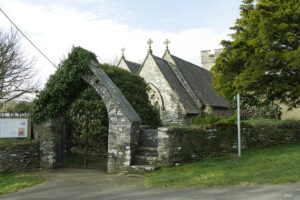 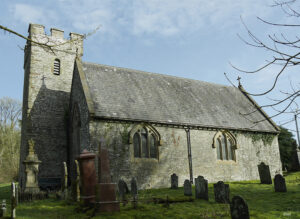 The present church consists of a single bayed chancel, a 4-bayed nave, a 4-bayed south aisle, a north porch and a 2 storeyed west tower, west of the nave. Construction is in slate rubble throughout, unsquared and uncoursed, but with medieval limestone quoins. Good pointing, later 19th century, with some ribbon (re)pointing. The internal walls are neither rendered nor plastered. The nave and south aisle are now of roughly equal height; the chancel is lower. Roofs are slated gables throughout; the tower roof was not seen.

The chancel now projects eastward beyond the south aisle, having been added to the church in the late 19th century. The location of the medieval chancel – and rood screen – is marked by the square external projection from the north wall of the what is now the nave central bay which houses a semi-spiral rood loft stair; the lintelled door onto the stair is medieval, but the upper part of the stair was truncated and blocked during the late 19th century restoration and the external projection finished with coping.

The 2-storeyed west tower has retained most of its medieval fabric and, in one form or another, its medieval openings. It is not tapered and lacks the basal batter and string course normally characteristic of the district. It also lacks a spiral stair turret. A low, 2-centred arch divides the ground floor from the nave, and the external west door also has a 2-centred head; both are early 16th century. North of the arch, the nave west wall displays a blocked, segmental headed medieval doorway into the tower; a similar doorway lies south of the arch, adjacent to similar blocking in the tower south wall suggesting that a skewed ‘passage’ lay in the angle between the two outer walls. A third door with a 2-centred arch, high in the nave west wall, formerly led into the belfry and was reached via a ladder (Glynne, 1898, 355); this had apparently been blocked by 1925 (RCAHM, 1925, 74) but is now represented by a slit light with a limestone surround which is, curiously, of convincing late medieval date – sources erroneous? The ground floor has a contemporary 2-centred barrel-vault; the belfry roof was not seen. The single-light belfry openings, with semicircular heads, and a slit light at a lower level, are also medieval. The crenellations, on a continuous offset corbel table, were rebuilt in the late 19th-early 20th century (RCAHM, 1925, 74).

The remainder of the openings are late 19th century, including the chancel arch and the arcade between the nave and south aisle. However, in the nave north wall, east of the north door, is an internal stoup with a square scalloped bowl and 2-centred head, of later medieval form. In addition, the south wall of the south aisle exhibits towards its east end a plain, square aumbry, probably contemporary with the surrounding wall ie. c.1500.

A shallow soakaway runs around the south aisle east and south walls, and a second runs around the tower north wall and north porch west wall; no drain or cutting elsewhere. There are suspended floors in the chancel, nave and south aisle; the north porch and tower floors lie directly on the substrate. There is no evidence for any below-ground crypt/vault within the church but memorials lie significantly close to the east walls. The tower floor now lies over 1m below floor levels within the rest of the church, and probably reflects its original levels; while the tower floor was probably always lower, the low head of the arch between the tower and the nave suggests that the nave, chancel and south aisle floors have at some period been raised.

It is not possible to closely date the core of the fabric but the nave – relatively long, and apparently of one build – may be 14th century in origin rather than earlier. The south aisle arcade has been rebuilt and cannot be dated, but the aisle was probably added c.1500 – a period when aisles were frequently added to churches in the region. The west tower is stylistically of early 16th century date, again a period of widespread tower construction.

The overwhelming character of the pre-restoration church was Perpendicular, ie. 15th-16th century, and it appears that the church was widely fenestrated with good mullioned windows of this style. A fragment of dressed stone now lies within the church apparently derived from a fine window of this type, of at least 2 lights; all windows have now been rebuilt. Clydau church was the subject of a lengthy account in 1860 (Glynne, 1898, 355) in which the entire church was described as ‘of the rude Welsh type’ but stylistically ‘Perpendicular’. It comprised a single bayed chancel with some form of division to the 3-bay nave (both absorbed into the present nave), with the 4-bay south aisle occupying the entire length of both cells. The west tower was as today but no porch was apparently present. The arcade between the nave and chancel and the aisle comprised 4 low, depressed arches on plain square piers which however, with the exception of the western arch, displayed mouldings. The chancel arch was plain and 2-centred, and while the rood stair in the nave north wall has survived, the door ‘set high up’ has gone. The attribution of a south door may be erroneous, for it is mentioned in connection with the stoup which is now located by the north door, while there is no physical evidence for a south door in the aisle. Windows were all square headed, stone mullioned and Perpendicular in style, and mainly 3-light; no timber framed windows or sashes appear to have been introduced, while some windows even retained fragments of stained glass, presumably medieval.

Despite its evidently fine construction the church was in poor condition by 1849 and the roof was leaking badly (Anon., 1849, 150). Nevertheless, it was described as a ‘very old and handsome building’. The 1860 account describes a similar condition when all was ‘decayed and out of repair’; the west tower was described as ‘of very rude construction’, especially the arch into the nave. All external walls were whitewashed. In 1874 the church was described in similar terms, but was said to lack ‘any features of interest’ (Brash, 1877, 277). It had been recently roofed in deal.

The church as it exists at present is largely the product of an extensive late 19th century restoration. The exact date of this work (and the architect responsible) is unknown but it was evidently after 1874 (see above). The north half of the church was extended east by one bay with the addition of a chancel in similar slate rubble to the rest of the church, the former east wall being pierced to form a 2-centred, moulded chancel arch. The arcade between the now longer nave and the south aisle was rebuilt as 4 bays of similar arches, on cylindrical piers with plain-moulded capitals and bases. The walls were generally repaired including the blocking of the rood stair and removal of all evidence for the upper (loft) door described in 1860, while the truncated projection was coped; new weather tablings were added throughout. The church was entirely refenestrated, except for the tower, mainly with 2- or 3-light neo-gothic windows beneath 2-centred heads and oolite dressings, some with tracery (unfortunately the Perpendicular ethos of the existing church was not followed). The north door was (re)built with a 2-centred head on moulded shafts, in oolite. Entirely new, softwood roofs were put on the chancel, nave and south aisle; the chancel roof with a boarded ‘wagon-roof’ ceiling, queen-post roofs arch-braced from wall-corbels in the nave and aisle. It has been suggested above that floor levels throughout the church (except in the tower) were raised; this probably occurred during the restoration when the church was refloored throughout. The chancel was polychrome tiled, while the nave and aisle passages were flagged (new flags, not re-used?) incorporating heating ducts below; suspended boarded floors were inserted beneath the new seating. A heating apparatus (type? not seen – still present) was installed within the tower, the remainder of which was largely unaffected. All fittings, except the font, were replaced, including the altar table and rails, seating, pulpit, and font, while the south aisle east bay was screened off as a vestry. The north porch was an entirely new construction; it is a north-south gabled structure, buttressed, with a door like the contemporary nave north door and single light neo-gothic windows.

There has been no real further work at the church subsequent to the restoration, but the shallow soakaways noted above may be later.

The font is medieval, with a square, cushioned bowl featuring mouldings including figures; it may be 12th or 13th century. The cylindrical oolite stem and base are late 19th-early 20th century.

Three ECMs now lie loose within the church (Dyfed PRNs 1066, 1211 and 1212). The former two – inscribed stones, one featuring an incised cross in addition – are regarded as originally having been situated within the yard (RCAHM, 1925, 75). One had been built into the north wall of the yard by 1860, forming the base of a sundial (Westwood, 1860, 223-8). The other had been removed from the site in the 19th century, and then returned; it was said to have once stood ‘in an old chappel in the churchyard’ (RCAHM, 1925, 75), presumably referring to a chantry, but there is no further evidence for the former presence of such a structure.

During the post-conquest period, it has always apparently been a parish church, within the medieval Deanery of Emlyn (Rees, 1932). In 1291 it was assessed at £10 yearly, a not inconsiderable sum (Green, 1911, 279). In 1536 the value was £12 by which time, at least, the benefice was a vicarage. However, although the Prebendary of Clydau was the rector, the advowson belonged to the Bishops of St Davids (ibid.) and gave its name to a prebendal stall in the cathedral, to which the rectorial tithes of the parish were annexed (Fenton, 1903, 267).

In 1998 St Clydai, Clydau, was a parish church. The living was a vicarage, held with Maenordeifi, Capel Colman, Llanfihangel Penbedw, Penrhydd and Castellan (Benefice 805), in the Archdeaconry of Cardigan, Rural Deanery of Cemais and Sub-Aeron (St Davids, 1997-8).