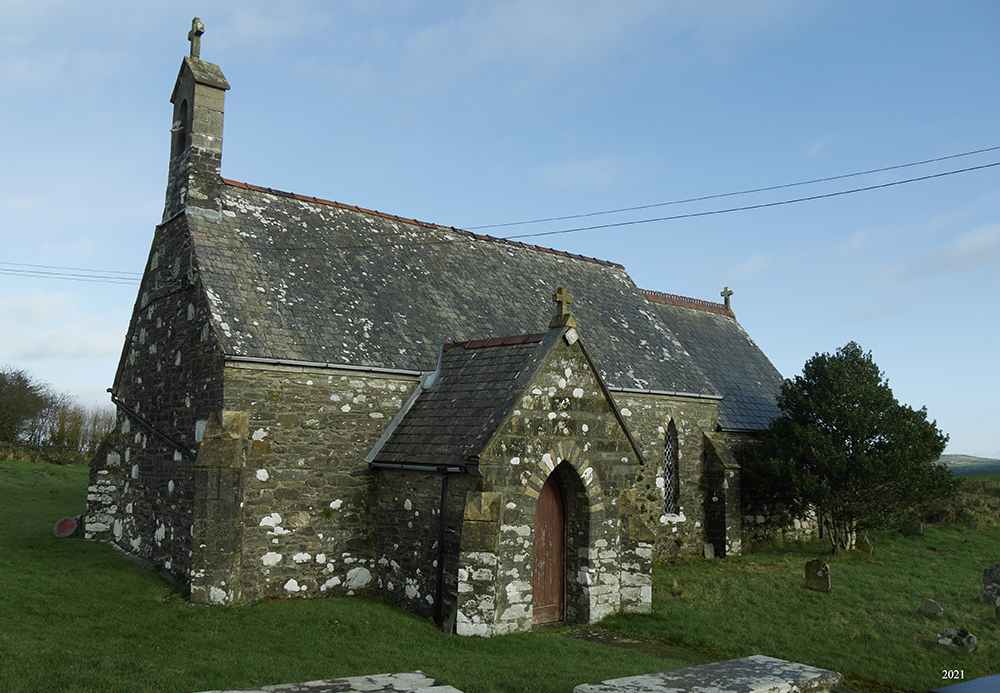 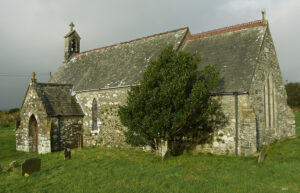 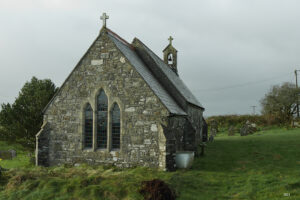 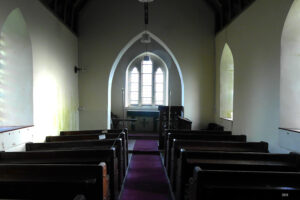 St Colman, Llangolman, is a 3-celled church, of small size. It was entirely (re)built in the earlier 19th century, in the same location as its predecessor but retaining none of the earlier fabric.

The present church consists of a single bayed chancel, a 2-bayed nave and a south porch.

The chancel and nave are from the earlier 19th century rebuild. Construction is in medium-sized limestone rubble, unsquared and uncoursed, stylistically early 19th century. The external pointing is all 20th century, and the chancel was repointed during the late 20th century. The internal walls are rendered/plastered, all of 1866?. Slated gable roofs throughout, the chancel roof now lying at a lower level than the nave. All openings are later.

The church was restored in 1866 (RCAHM, 1925, 170). The restoration was of medium-high impact. The church was possibly refloored with suspended floors?, and possibly reroofed. The chancel arch may have been rebuilt. All other openings are from the 1866 restoration, and include the simple, 2-centred neo-gothic lancets without surrounds, and the similar south door. Angle buttresses were built against the corners of the building, in squared and coursed limestone rubble. The present bellcote was constructed on the nave west wall; it is a simple gabled structure with a plain 2-centred opening. The south porch was built (new?), in squared and coursed rubble like the buttresses, and with a simple 2-centred doorway lacking a surround.

The form of the earlier church is not known. It was described as ‘not distinguished by any architectural details of importance’ by Samuel Lewis in 1833 (Lewis, 1833).

The font is not medieval.

The church was not listed in 1998; it has been declared a Building of Special Historic or Architectural Interest.

St Colman, Llangolman, was not a parish church during the post-conquest period, but a chapelry of the medieval Deanery of Cemais (Rees, 1932) which was, along with the chapelry of Llandeilo Llwydarth, annexed to the vicarage of Maenclochog which in turn was granted to St Dogmael’s Abbey by David de Rupe (‘Roche’) c.1320 (Green, 1912, 282).

At the dissolution Maenclochog and its dependent chapelries fell to the crown and in 1536 were leased to John Leche of Llawhaden (ibid.); the king appears to have retained the advowson. In 1594 Llangolman was described as a curacy, in the patronage of Queen Elizabeth I (Green, 1912, 246) along with Maenclochog and Llandeilo Llwydarth. In 1786 the benefices of Maenclochog, Llandeilo Llwydarth and Llangolman were united (ibid.); the union was formalised in 1877 and continued in 1998.

St Colman, Llangolman, was a parish church in 1998. The living was a vicarage, held with Maenclochog, Llandeilo Llwydarth, Henry’s Moat, Mynachlogddu, New Moat and Llys-y-fran (Benefice 831) in the Archdeaconry of St Davids, Rural Deanery of Daugleddau (St Davids, 1997-8).