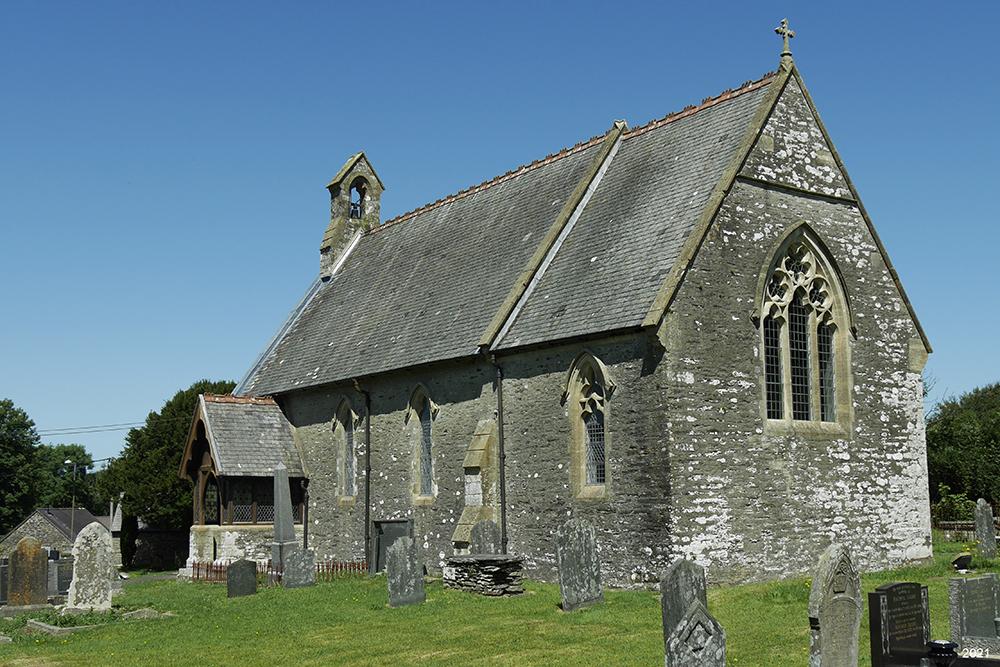 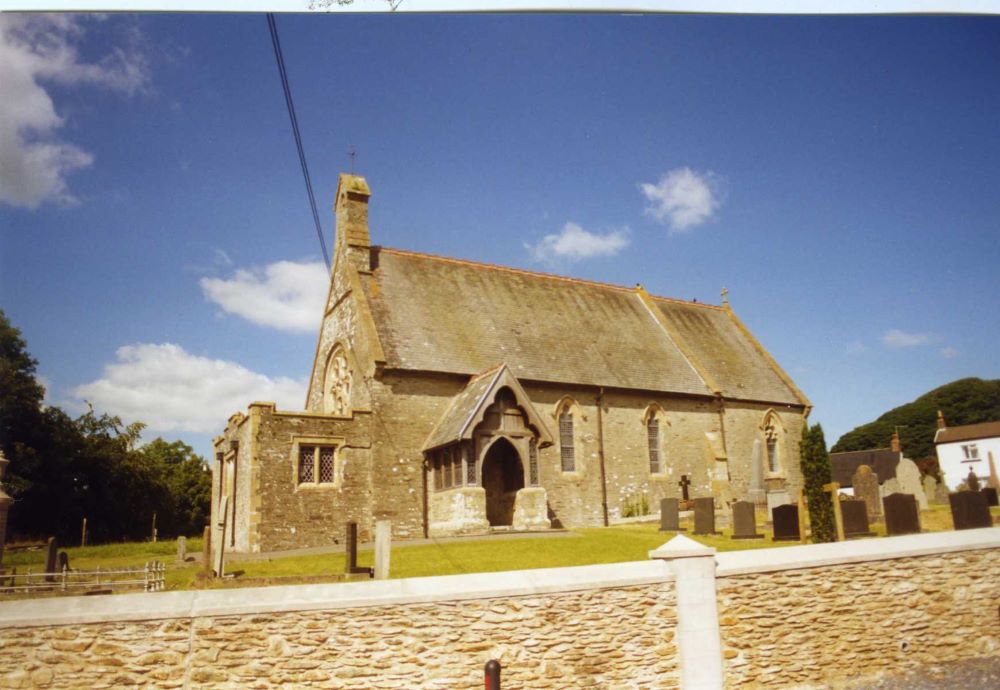 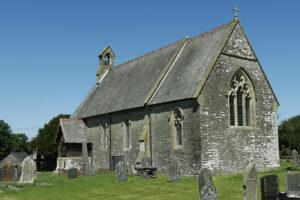 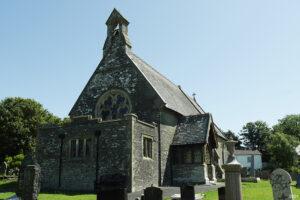 Archaeological potential – very good. Church entirely rebuilt in 1829, in same location as earlier church and above its foundations, and again in 1883-4; no physical evidence for pre-19th century church; no external cutting or drain around church; no evidence for floor level changes; underfloor void; no crypt/vault evident; evidence of former components beyond 10% of church; possible prehistoric features beneath church.

St Cristiolus, Eglwyswrw, is a 3-celled church, of medium size. It was (re)built in 1883-4 by Middleton and Son, Architects (NLW, SD/F/158). The rebuild was termed a ‘restoration’ but it is apparent that only the core of the earlier fabric, from 1829, was retained.

The present church consists of a 2-bayed chancel, a 3-bayed nave, a south porch and a flat-roofed vestry of 1 bay, against the west wall of the nave. The chancel, nave and south porch are constructed from slate rubble throughout, unsquared but roughly coursed and without true quoins; the facework is all from 1883-4. External pointing of 1883-4; the internal walls are rendered/plastered. All dressings are in oolite, from 1883-4 and neo-gothic. The side windows are lancets with plain 2-centred surrounds, but the east window is 3-light and traceried, while there is a fine rose-window in the west wall. The main entry is the 2-centred south door. There is the chancel arch, with external buttressing. The west wall carries a gabled bellcote, shouldered, with a single 2-centred opening and bell. The south porch is half-timbered. The roofs are slated gables, from 1883-4. Floors are suspended except in the porch, and from 1883-4.

There is no physical evidence for the pre-19th century church. No external drain or cutting is present. There is no evidence for internal floor level changes. There is an underfloor void beneath the suspended floors. No vault or crypt is evident. A former south transept lay beyond the south wall. The church is built within a possible prehistoric site, and upon a round barrow?

There are several contemporary accounts of the disposition and condition of the pre-1829 church, which may have comprised nave, separate chancel, and south transept. A visitation in 1504 by the impropriator, the Abbot of St Dogmaels, records that the chancel ‘was ruinous and the windows not glazed’ (Pritchard, 1907, 91). Churchwardens’ presentments of the 17th and 18th provide further evidence. The church had apparently never been paved and still had not been by 1708 (Evans, 1935, 45). In 1684 the windows were again not glazed, the ‘chancel’ not whitewashed and one of the bells was out of repair (Evans, 1918, 164); a double bellcote was presumably present. The chancel roof was evidently rebuilt c.1700 – it was ‘newly made’ in a presentment of 1708 (Evans, 1935, 145) suggesting that the pre-1829 church had a separate nave and chancel roof, and that a chancel arch may have been present. Fragments of medieval ridge-tile were found during excavations within the churchyard (Ludlow, forthcoming), presumably from the church. A south transept was present, south of the nave west bay, which, when finally demolished in 1883, yielded fragments of dressed stone of medieval date, including a mullion (RCAHM, 1925, 94). It lay at a pronounced angle to the nave (NLW, SD/F/158).

A date-stone in the porch (not in situ) is inscribed ‘1756’, suggesting a restoration or rebuild. However, the church was still, in 1829, fundamentally medieval to judge by an account of c.1811, which described it as ‘a low plain building, without tower or any decoration within or without’ (Fenton, 1903, 291), and ‘like all the others in Cemaes’; the author felt it to be medieval.

The church was rebuilt in 1829 (RCAHM, 1925, 93; Lewis, 1972, 92). The extent of the work is not known, but a high impact was suggested in 1859 when the Cambrian Archaeological Association examined the church and found ‘nothing of antiquarian interest’ (Anon., 1859, 337). Moreover, the present fabric is all 19th century but, to judge from the Faculty specifications (NLW, SD/F/158), not all from the 1883-4 restoration. The specifications and accompanying plan and north elevation show the 1829 church; it was a low, single celled building without a chancel arch, but divided into a 2-bayed chancel and a 3-bayed nave by slight internal buttresses. The south transept was retained. The church was entered through a segmental-headed doorway in the nave west wall, of any date, and there was an east window, 2 windows in the nave north wall and one in the south wall; all had plain 2-centred openings of typical early 19th century form, and 16-pane sash windows with simple timber-traceried heads. The gable-end walls had upstands; the west end carried a double bellcote with Caernarfon-headed openings and a classical ball-moulded ‘cupola’. The roofs were of 1829 with double-collar trusses; the floors were also probably renewed in 1829. A triple-decker pulpit is shown; seating comprised 11 box pews in the nave, and loose benches at the west end.

In 1844 a schoolroom was adapted from the south transept (Lewis, 1972, 206). It is also shown on the Faculty plans; the wall between it and the nave was by this time solid and without evidence of ever having been otherwise. It was entered through its west wall and was lit by 3 windows, of unknown form. The roof appears to have been transeptal to the nave; the structure was ‘nearly roofless’ in 1883.

The church was restored in 1883-4 by Middleton and Son, Architects, of Cheltenham (NLW, SD/F/158). The specifications for the work suggest that it was confined largely to reroofing, reflooring and refenestration, it is clear that most of the fabric dates from this restoration. Only the core of the 1929 walling seems to have been retained; the church was considerably heightened, but the present facework is similar throughout, while the schoolroom/transept was demolished as part of the programme but has left no evidence within the facework. The west door was blocked. The church was also reroofed, refloored, reseated and refitted.

Subsequent work includes the construction of the western vestry, which occurred in 1930 (NLW, SD/F/159) and involved the reopening of the west door; the architect is unknown. The vestry is described above.

St Cristiolus, Eglwyswrw, occupies the high-certainty site, and probably the location, of a pre-conquest religious site –

Eglwyswrw was a parish church during the post-conquest period, of the medieval Deanery of Cemais (Rees, 1932). It is first mentioned in 1291, as ‘Ecclesia de Clesserow’, when it was an advowson of St Dogmaels abbey valued at £4 annually for tenths to the king (Green, 1911, 293). The grantor of the advowson is not known but it has been suggested that it was Jordan de Cantinton, a tenant of the Lordship of Cemaes and possibly Lord of the Manor of Eglwyswrw during the later 12th century (Pritchard, 1907, 51). With its chapelries at Llanfair Nant-gwyn and ‘Penkelly Vychan’, the vicarage of Eglwyswrw was valued at £12 2s 8d in 1536 (ibid.).

The dedication to St Cristiolus has been subject to much controversy and there is a strong contender for the original dedication in St Eirw (Ludlow, forthcoming); the original dedication may in fact have been a joint one. Other authorities have regarded the ‘wrw’ element of the place-name as relating to a topographic feature, while ‘Eirw’ may be derived from ‘(g)wrwyf’ (ie. Virgin).

(A cist cemetery occupies at least the southern side of the churchyard (Dyfed PRN 32087). It was partly excavated in 1996 (Ludlow and Ramsey, forthcoming) and produced burials and surfaces dateable to the 12th and 13th centuries, in addition to features of possible prehistoric date.

A chantry chapel is said to have stood within the yard ‘in the reign of Queen Elizabeth’ (Fenton, 1903, 291-2), and dedicated to ‘St Eirw’. A large, square feature appearing to represent a robbed structure was excavated south of the church in 1996 (ibid.), but was inconclusive.)