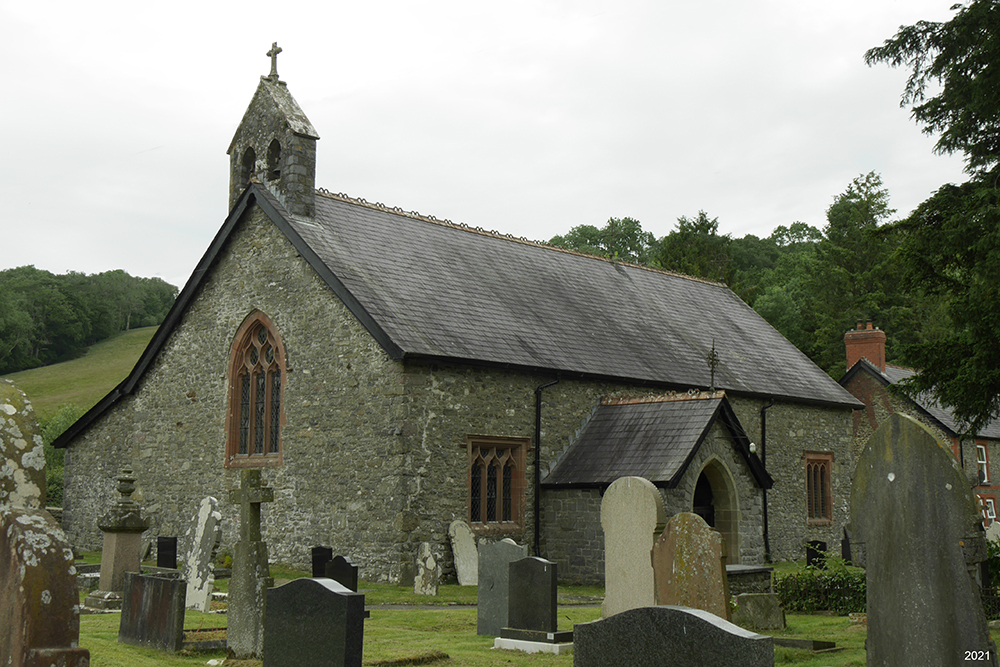 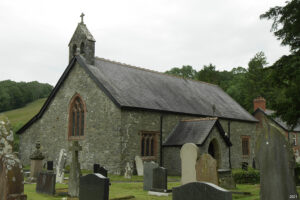 Reason for Listing: Included as a basically medieval church with good quality late-C19 stonework in the arcade and windows and some C18 to C19 memorials.

The present church consists of a 5-bayed chancel/nave; a 3-bayed north aisle of the same height, and nearly the same width, with a transeptal east bay projecting slightly; a lean-to vestry in the angle between the aisle east wall and the north wall of the ‘chancel’ west bay; and a south porch.

Construction is in medium-large limestone rubble, with some Old Red Sandstone, unsquared and uncoursed, with crude medieval quoins. The external pointing is largely from 1894-5 while the interior is plastered, again from 1894-5. Slated gable roofs, the chancel and nave probably always roofed continuously; the north aisle roof lies at the same level, its west bay transeptal. The vestry has a slated lean-to roof continuing the ‘chancel’ roof north slope. Roofs and floors, 1894-5.

There is no external cutting or drain. No evidence exists for floor level changes. There is a below ground heating chamber in the ‘nave’, and flues. An underfloor void is present. A crypt or vault below may lie beneath the chancel. There is no evidence for former components beyond the present walls. External memorials lie significantly close to the east and south walls.

Few features survive from the medieval church, which comprised only the present 5-bayed nave/chancel. There is, however, a medieval ‘priest’s door’ in the north wall of the ‘chancel’ west bay, with a weathered 4-centred surround, probably 16th century. The stoup in the ‘nave’ west wall is medieval though probably not in situ; it has a framed, square bowl in a crude, triangular-headed opening – former font bowl? The present south door is probably on the site of the medieval door but was rebuilt in 1894-5. The medieval east and west walls display a pronounced batter.

Plans and elevations that accompanied the Faculty application for the 1894-5 restoration (NLW, SD/F/438) show the church as it then existed, which was still fundamentally medieval. The church was still a single cell (the south porch depicted was probably a 19th century addition, see below). A square projection shown in the north wall of the ‘nave’ east bay is roofed by a continuation of the north slope; it appears to represent the site of a rood-loft stair but was, by 1894, lit by a square-headed, 3-light window of ‘Perpendicular’ character, which have been early post-reformation (but see below). The uncusped 2-light windows in 2-centred outer arches with simple plate tracery shown in the west wall and the south wall of the ‘nave’ west bay may have been genuine 13th century survivals. A plain, 2-centred west door is shown, and a single cusped lancet in the chancel north wall, almost certainly both medieval. Two large, 3-light square-headed windows lay in the south wall; they may have been 16th century or later neo-Perpendicular (see below). The plain, gabled double bellcote with 2-centred openings may also have been medieval; no bells are shown. However, the church was described as ‘devoid of architectural interest’ in 1855, and of ‘rude and meagre character’ (Anon., 1855, 299, 302).

There was a medium-impact restoration in 1869 when a grant of £25 was provided towards reseating the church (plaque in church porch). It is clear, however, that much of the church was also refenestrated around this period. The present chancel east window pre-dates the 1894-5 restoration; it is shown on the plans and elevations that accompanied the faculty application in 1894 (NLW, SD/F/438) and is a 3 light, curvilinear traceried oolite window in a 2-centred brickwork opening. The elevations show a south porch which appears a de novo mid 19th century structure with low clasping buttresses; it survived the 1894-5 restoration but has now gone. It is possible that the ‘Perpendicular’ windows shown in the nave south wall (see above), and in particular the one depicted in the former rood-loft projection, were also mid-19th century; all were removed in 1894. The west door had by this time, at least, been blocked. The bier-house was still present, and all other features including the bellcote appear to have been retained from the earlier church. The floor passages had been tiled, with suspended boarding, and ‘typical’ open seating of the mid 19th century is shown, all doubtless from 1869. A large organ occupied the nave west bay. The contemporary church was described as ‘a small unimportant structure’ in 1893 (Anon., 1893, 94).

The church was restored again in 1883-4 (NLW, SD/F/438), to the specifications of the architect Stephen W. Williams of Rhayader. The restoration was high-impact. The north wall and bier-house were removed, and the north aisle and vestry built new, the aisle with an arcade of moulded 2-centred arches on cylindrical piers. The vestry has a 2-centred external door. The ‘chancel’ east wall gable was rebuilt, as was the upper half of its north wall, and the entire south wall was heightened. All windows were replaced, mainly by 3 light windows with cusped ogee heads, neo-Perpendicular, in square sandstone surrounds and drip-moulds. The ‘chancel’ north door was re-opened, into the new vestry. The south door was rebuilt. The western double bellcote was rebuilt in squared limestone rubble (or possibly in 1906, see below). The church was entirely re-roofed in softwood, the chancel/nave with a matchboard ‘wagon-roof’ ceiling, the aisle with strutted common rafters; no tabling was built. The vestry has a lean-to roof of common rafters, and a woodblock floor, possibly suspended. The ‘chancel’ floor was polychrome-tiled, and the  ‘nave’ and aisle passages tiled, with suspended boarding/woodblock floors. A ‘Porritt’s’ underground heating apparatus was installed in the ‘nave’, with a flue leading below the passage floor to a chimney on the vestry west wall, with a limestone base and square brick stack. The interior was replastered, all the existing plaster probably having been removed. The 1869 seating and pulpit were re-used (and altar rail?). The font was moved (and substantially rebuilt?).

There has been a fair amount of subsequent work. The present south porch is similar in construction to the yard lych-gate which is dated 1906; it is of rusticated limestone rubble, squared and coursed, without internal plaster. The door is a simple 2-centred arch. The gable roof is of softwood common rafters, and the polychrome-tiled floor is laid directly upon the substrate. (The bellcote is of similar construction – see above).

The font has an octagonal limestone bowl, of the 19th century? and a square sandstone stem and base, with attached shafts, probably from 1894-5 (the old font bowl re-used as a stoup? see above).

(Documentary sources for the medieval church have the separate Dyfed PRN 4080).

At the dissolution the possessions of the abbey, including Llansadwrn and Llanwrda, fell to the crown. The patronage of Llansadwrn vicarage, with Llanwrda annexed, was granted by Henry VIII firstly to Sir Rhys ap Gruffydd, and upon his conviction for treason, to Thomas Jones, Kt., of Haroldston, Pembs. (Williams, 1932, 54). Llanwrda remained annexed in 1833 (Lewis, 1833) and the union with Llansadwrn continues into the 1990s.

In 1998 St Cwrdaf, Llanwrda, was a parish church. The living was a vicarage, held with Llansadwrn and Manordeilo (Benefice 676) in the Archdeaconry of Carmarthen, Rural Deanery of Llangadog and Llandeilo (St Davids, 1997-8).

Owen, E., 1893, ‘A Contribution to the History of the Premonstratensian Abbey of Talley: Part I’, Archaeol. Cambrensis, Vol. X, Fifth Series.