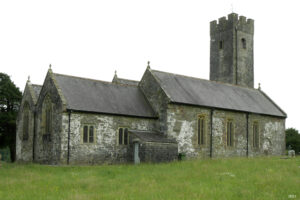 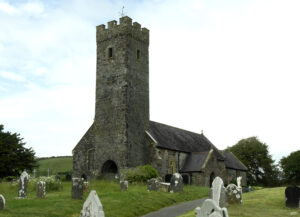 Reason for Listing: Listed grade II* as a substantial medieval church, retaining a fine tower, with good interior detail from the C15 to the C20.

Archaeological potential – good. No external cutting or drain around the church;  footings exposed in 10% of church; 3 former components beyond church, without physical evidence; floors lowered; former inhumations below ?80% of church; floors over heating flues in 50% of church; ?below-ground floor in 5% of church; external memorials significantly close to 20% of church.

The present church consists of a 2-bayed chancel, a 3-bayed nave (with a square projection for a former rood stair), a 2-bayed north chapel, a 3-bayed north aisle, a south porch, a  3-storey west tower, and a boilerhouse north of the chancel west bay from 1927. Former ?post-medieval components to north, west and south of church. Construction is in limestone and Old Red Sandstone rubble throughout. Dressings are mainly yellow oolite and from 1883-8. There are extensive remains of 18th-early 19th century external render; repointing where it occurs is generally from 1883-8. The interior is plastered. Roofs are slated gables; the boilerhouse has a slated lean-to roof while the west tower roof was not seen.

The chancel east gable was rebuilt in 1883-8 including the window which is of 3 cusped lights with Perpendicular tracery, with infill. The north wall is a 2-bay arcade to the north chapel, of depressed 2-centred arches on chamfered piers from the later 15th century. The south wall is lit by 2 windows of 2 cusped lights and simple tracery, with infill, from 1883-8. There is a simple, square-headed recess with a chamfered piscina in the south wall, medieval but restored, and a doorway from 1883-8. The plain, 2-centred chancel arch is medieval. The oak roof comprises collar-rafter trusses from 1883-8 but retaining some pre-19th century timbers. The tiled floor is from 1883-8 when it was lowered.

The nave north wall is a 3-bayed arcade into the north aisle, of 2-centred arches on chamfered piers with square bases, from the 16th century. There are a low buttresses at each end of the south walls from 1883-4; the east bay is thrown out as a shallow square projection from the south wall that formerly housed the rood-loft stair (cf. Llanfynydd and Myddfai, Carms.), now lit by a window like the chancel south wall from 1883-8. Two more similar windows are inserted in the south wall. The south door has a segmental rear arch that may be medieval but the surround is from 1883-8. The oak roof comprises collar-rafter trusses braced from wall-plates, from 1883-8 but retaining some pre-19th century timbers. Floors are tiled like the chancel, from 1883-4, above heating flues inserted in 1927.

The north chapel is similar in construction to the chancel but quoined. The gable was rebuilt 1883-8 as the chancel, including the east window. There are 2 windows in the north wall, both of 2 lights with 4-centred heads, both in square ‘Tudor’ surrounds, with infill, from 1883-8 but probably copies of existing early 17th century windows. The roof is like that in the chancel and of similar dates. The floor comprises re-used 17th-18th century memorial slabs.

The north aisle was blocked from the north chapel in 1883-8 bit formerly communicated via an arch similar to the arcade into the nave; there is a door in the blocking also from 1883-8.  There are 3 windows in the north wall, each of 2 cusped lights, ‘Elizabethan’, with infill, from 1883-8; the west wall window is like the chancel east window and also 1883-8. The west bay features a blocked north door with a depressed semicircular head and ornamented dripmould, all in Old Red Sandstone ashlar from the 16th century; the blocking lies beneath external render. The roof and floor are like those in the nave and of similar dates.

The south porch is plain, from the later 15th century but the internal stone benching is 20th century. There is a slight external batter. The gable was rebuilt 1883-8 but the door has a plain 2-centred arch from the 15th century. The interior is pebbledashed, 1935?; next to the nave south door is a stoup with a weathered bowl in a simple square recess, medieval. The oak roof of close-coupled rafters may all be from 1883-8; the pitch stone floor is laid directly on the substrate, from the 20th century.

The west tower is not typical of the region. It was formed out of an earlier 15th century west porch in the early 16th century, and comprises 3 storeys but is very tall, narrow and tapering. A straight stairway rises in the thickness of the south wall, entered from the nave through a narrow 16th century door, and lit by simple square slits of similar date. There is an external batter up to a string-course. The plain 2-centred doorway into the nave is 15th century, with an inserted square opening (blocked) for the bellropes above, and the west door is similar. There is a cross-incised, square stoup in a semicircular-headed recess in the south wall, early 15th century. The ground floor has a segmental barrel vault, probably 16th century. The pitch stone floor may be laid directly on the substrate like the porch, and similarly from the 20th century. The second stage is lit by simple slits in the north and east walls, 16th century. The belfry stage has a single-light, segmental-headed openings in all 4 walls; cusped opening in each wall, 16th century but, except in the north wall, rebuilt with concrete surrounds in the 20th century. The crenellated parapet lies on a corbel table, of 16th century date.

The boilerhouse lies north of the chancel west bay and was added in 1927. There is a door in the east wall with a concrete lintel. The roof is a slated lean-to.

There is no cutting or drain around the church, but footings are exposed at the east end and the north-west corner. There were 3 former components beyond the present church, but without physical evidence. The floors were lowered, in 1676?, and in 1883-8; there were extensive inhumations below the pre-1883 floors. The flooring lies over heating flues in the nave and north aisle. The boilerhouse floor may be below-ground. External memorials lie significantly close to the south wall.

The chancel and nave are medieval, but cannot be closely dated; they may be 14th century. The west tower ground floor was, it appears, added as a west porch in the earlier 15th century. The north chapel arcade is stylistically different from the aisle arcade and may be later 15th century along with the south porch; the blocked north aisle doorway may date the component to the 16th century with the remainder of the west tower. The boilerhouse was added in 1927. There were 3 former components of unknown date (see below).

The church depicted on the tithe map of 1845 (NLW, Llangyndeyrn, 1845) was somewhat larger than the present church, having possessed two components that have now been lost altogether. One component lay west of the north aisle, but detached from the tower, while the second lay south of the nave west bay but detached from the porch; a further component occupied the site of the present boilerhouse. The function of these former components is not known, but in their locations it is unlikely that they were medieval; one may have housed a schoolroom and been a construction of the early 19th century as at Llanboidy, Carms, and Eglwyswrw, Pembs.  The components were removed either during the restoration of the late 1850s or that of 1883-8.

The pre-1883 church was described as ‘lamentably neglected… its 13 windows  of wood, without a trace of stonework, dating from the 17th century or later; roofs of a low pitch and the meanest construction…windows without rear-arches, and an entire absence of cut stonework in piers, arches etc.’ (Clark, 1902, 128-31).

The church was restored in 1883-8 (ibid.) to the designs of the architect J. P. St Aubyn. The restoration was medium impact. The floors were lowered and ‘497 skeletons were discovered’ (ibid.). The church was reroofed (but retaining some earlier timbers), refloored and refenestrated.

The boilerhouse was constructed in 1927 and fitted with a Musgrave heating apparatus (Carms. R. O., CPR/4/20).

There is a medieval churchyard cross-base immediately south of the church.

St Cyndeyrn, Llangyndeyrn, was a parish church during the medieval period (Rees, 1932), of the medieval Deanery of Kidwelly. The advowson appears always to have belonged to the Lord of Kidwelly (ibid.).

The church was granted to New College, Leicester, in 1355-6, along with the chapels of Capel Dyddgen and ‘Llangenhython’, both in Llangyndeyrn parish (Stephens, 1939, 69); St Cyndeyrn itself does not appear to have formed a part of the grant. There were at least two more medieval chapelries in the parish.

In 1833 when the living was a perpetual curacy endowed with £800 royal bounty and £1200 parliamentary grant and in the patronage of Rees Goring Thomas, Esq. (Lewis, 1833).

In 1998 St Cyndeyrn, Llangyndeyrn, was a parish church. The living was a vicarage, held with Pont-iets (Benefice No. 684), in the Archdeaconry of Carmarthen, Rural Deanery of Cydweli (St Davids, 1997-8).

Waters, E. J., 1911, ‘Among the Tombs’, Transactions of the Carmarthenshire Antiquarian Society Vol. 6.