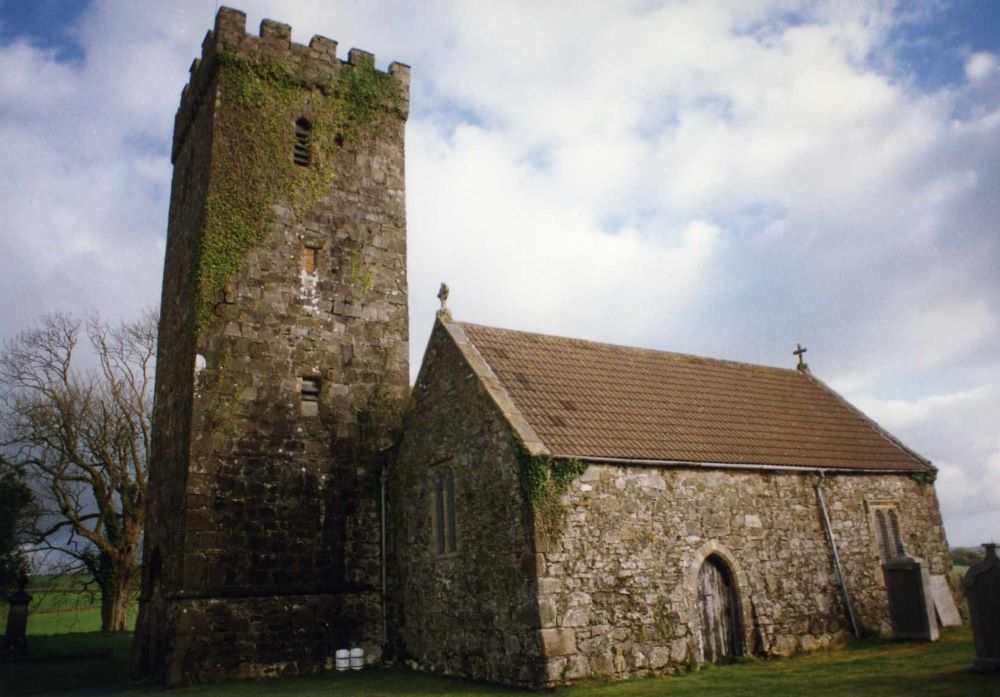 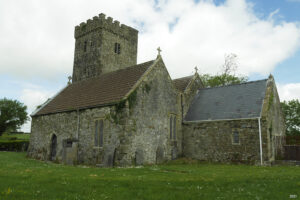 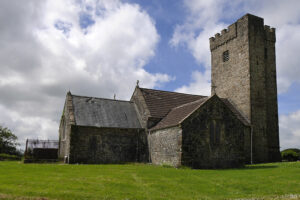 The present church consists of a 2-bayed chancel, a 3-bayed nave, a single-bayed north transept, a 3-bayed south aisle, and a 3-storeyed west tower. Skew passages were formerly present. Construction is in limestone rubble. There are some medieval openings in limestone; other dressings are in yellow oolite, neo-Perpendicular and from 1920, some in imitation of original openings. There are extensive remains of 18th – earlier 19th century lime render and mortar pointing and the interior is plastered, c.1920. The chancel roofs is slated gables; the nave, transept and aisle are roofed with later 20th century synthetic tiles and the tower roof was not seen..

The chancel east window is from c.1920, including the embrasure and infill, and has 2 cusped lights, with neo-Perpendicular tracery, in a 2-centred surround and drip-mould. The upper fifth of each side wall was rebuilt or heightened in the mid 19th century, with very poor pointing. there is a single cusped lancet in each wall, with a square surround, from c.1920 but within medieval embrasures. The south wall of the east bay features a shallow internal, square headed recess with a dog-legged eastern stop, externally represented by an area of blocking which lies above the 18th – early 19th century render; the whole represents the site of a former skew passage arch, blocked and adapted (for memorials) in the ?mid 19th century. The plain, 2-centred chancel arch is an insertion, and is set back from the stops at the corners of chancel and nave; it may be either mid 19th century, or, like the upstand above, be from c.1920. The softwood roof is from c.1920 and has collar-rafter trusses arch-braced from wall-plates, matchboarded above. The sanctuary floor is tiled, from .1920, possibly over a burial vault; the remainder is flagged, from the early 19th century, worn, and including 2 contemporary memorial slabs.

The nave north wall has an external corbel table at eaves level, probably late 13th – early 14th century and which possibly carried a former parapet. The wall is pierced by a neo-Perpendicular, cusped  2-light window with sunk spandrels in a square surround and label, all from c.1920 with infill. Beneath it, an amorphous area of blocking is visible which may represent the site of a former north door. Internally, the north wall exhibits a rood-loft corbel in the west bay. The nave roof timbers are as the chancel, on contemporary wall-corbels; the line of a lower-pitched roof can be seen on the east wall of the tower. The nave is floored as the chancel, including burials.

The north transept is entered from the nave through a plain, 2-centred arch, from the 14th century. The junction of the transept east wall and the chancel north wall features a squinch at half-height, which is crude, lies beneath all finishes and appears truncated; it appears to represent the remains of a former skew-passage like that to the south (see below). In the east wall is a blocked, low, square window, the jambs of which can also be seen; the blocking lies beneath 18th – early 19th century render. The transept is now lit by a 2-light window in its north wall, like that in the nave and also c.1920, with infill, partly filling an earlier opening below sill level. It is entered from the churchyard through a doorway with plain, semicircular head and an internal timber lintel, post-1920?. Internally, the east wall features a small square recess, medieval?, piscina?. The transept has a plain, 2-centred barrel-vault, 14th century. The floor is boarded, c.1920, over a void. The transept is now used as a vestry.

The south aisle has very large, crude quoins and features some conglomerate rubble; the south wall has an external basal batter. It communicates with the nave through a 3-bayed arcade of plain, 2-centred arches on moulded, octagonal piers with chamfered abaci and square bases, from c.1500; the eastern pier, and the eastern 2 arches,  were replaced (but not in imitation) in c.1920. The east wall may have belonged to a former south transept, swept away when the aisle was added in c.1500; the northern third features similar blocking to that in the chancel south wall, and a diagonal stone at the base of the southern end of this blocking, which are all derived from the former presence here of a skew passage. A window has been inserted through the blocking, like that in the nave; the east bay south wall is lit by a similar window while a third lies in the west wall, and all are probably in imitation of original windows from c.1500.  In the south wall of the west bay is a doorway with a 2-centred surround in chamfered limestone, weathered, from c.1500; to the east, the internal face exhibits a contemporary stoup with a square  recess and a semi-octagonal bowl. The aisle is roofed and floored as the nave.

The west tower is in roughly coursed limestone rubble with external ?putlog holes, has detail from the early 16th century and comprises 3 storeys. It is slightly tapered and has the external batter up to a string-course typical of the region. A square spiral stair turret projects from the eastern half of the north wall, entered from the nave through a low doorway with a 4-centred surround, early 16th century, and lit by simple loops some of which are blocked in cement. The ground floor communicates with the nave through a plain, 2-centred arch, with chamfered imposts, from the early 16th century. The west door has a 2-centred surround in chamfered limestone over which the string-course is carried as a 2-centred drip-mould. There is a plain, 2-centred barrel-vault. The floor is flagged as the nave and aisle, earlier 19th century. The second stage was lit by openings in 3 of its faces, all now blocked. That in the east wall is represented by a segmental arch and an amorphous area of blocking; there are 2 square openings, one above the other, in the both the south and west walls, with cement blocking. The belfry stage has a 2-light opening in the east wall, with a segmental outer arch, simple, chamfered, square limestone surrounds from the 16th century, blocked in the 20th century. A similar, blocked, single light opening lies in the north wall. The south wall is pierced by a louvered opening with a 16th century semicircular head, while the cement-blocked, 2-light opening in the west wall has a segmental outer arch and 2-centred heads with 16th century jambs but rebuilt heads. The crenellated parapet lies on a corbel table which was restored in c.1920; it does not extend around the stair turret which has been truncated, the base of a higher level parapet and corbel table being visible.

There is no external cutting or drain, but the yard has been truncated adjacent to, or debris has been cleared away from, the nave north wall. There is no evidence for floor level changes. There is no underfloor void (except in the transept?), but burial vaults lie beneath the chancel, and there are burials beneath the nave. External memorials lie significantly close to the east wall and the south aisle.

The nave may be from the late 13th or early 14th century; the only close parallel for its external corbel table is in the chancel at Myddfai, in north-east Carmarthenshire. The chancel may be contemporary and formerly featured a 14th century window. The vaulted north transept is a 14th century addition; it formerly possessed a skew passage, and the evidence for a southern skew passage suggests that there was also a (contemporary?) south transept, ie. the 14th century church was cruciform. The south transept was absorbed by the south aisle which can be dated to c.1500. The west tower was added in the early 16th century.

The pre-restoration church is shown in an illustration, taken from the north-west, of 1887 (Robinson, 1887, 116-118), when some work had recently been undertaken, for it was described as having been ‘“done up” lately, for such work cannot be called restoration in any sense’. This may provide a context for the heightening of the chancel and the removal and blocking of the southern skew-passage; the northern passage had been truncated and blocked at an earlier date (see above) while the blocking of the possible former north door cannot be closely dated. The west tower was as today, and the stair turret had already been truncated, but the openings were as yet unblocked; its floors were rotten and the belfry floor had gone. The nave and chancel were, unlike at present, roofed continuously, and the nave north wall was blind. The north transept was lit by what appears to be a medieval, uncusped 2-light window in its north wall, and there was no doorway through its west wall. The interior was ceiled, and plastered, the plaster of both being in poor condition. the floors may be earlier 19th century (see above).

The church had still not been restored when visited by the Royal Commission in c.1917 (RCAHM, 1917, 167-8); remarkably, they described the church as ‘devoid of antiquarian interest’ then went on to describe the east window as ‘14th century, of 2 broad lights with an oval light above’. The cusped single lancets in the chancel north and south walls were also the original windows, while the south aisle east window, from c.1500, was similarly unrestored.

The church was eventually restored, probably around 1920 to judge from the fittings, but the date and architect responsible are not known. The east window, and north transept window, were replaced with the present neo-Perpendicular windows, evidently not in imitation of the originals (see above); the south aisle windows, and the chancel side windows, may however be copies of those already present. The nave north wall was given an entirely new window. The chancel arch, and 2 bays of the south aisle arcade, were rebuilt. The church was reroofed and replastered, but not refloored, and possibly not reseated. The plain transept door may be later.

A 17th – 18th century altar table was observed within the church in 1974 (Yates, 1974, 66); the present altar table is later 20th century. The softwood pews, with their freestanding board flooring, may predate the restoration of c.1920. The oak altar rail, in the Arts and Crafts tradition, is from c.1920 as may be the pulpit on an oolite base, and the transept vestry screen. The softwood tower screen may be mid 20th century.

The simple font has an octagonal bowl, stem and base, late medieval?, or post-medieval?.

A statuette lying loose in the south aisle stoup is thought to be a weeper from the 15th century tomb of Sir Rhys ap Thomas in St Peters Church, Carmarthen, acquired during its restoration in 1865 (Baker-Jones, 1963, 119); it had reached Llangynin by 1887 (Robinson, 1887, 116-118). On of the south door jambs was thought to be derived from an inscribed stone, but the inscription has now gone (ibid.).

St Cynin, Llangynin, was not a parish church during the medieval period (Rees, 1932), but a chapelry of St Clears parish in the medieval Deanery of Carmarthen. It appears to have been a possession of the Cluniacs at St Clears Priory.

Llangynin had become a parish by 1833 when the living, a perpetual curacy, was endowed with £800 royal bounty; the right of presentation was in dispute between the joint patrons, who were the Vicar of St Clears and J .L. Philipps, the patron of St Clears (Lewis, 1833).

In 1998 St Cynin, Llangynin, was a parish church. The living was a vicarage, held with St Clears, Llanddowror and Llanfihangel Abercywyn (Benefice no. 804) in the Archdeaconry of Carmarthen, Rural Deanery of St Clears (St Davids, 1997-8).

‘St Cynin’ is also found in the form ‘St Cymyn’ in the original dedication of the nearby Eglwys Gymyn, Carms..