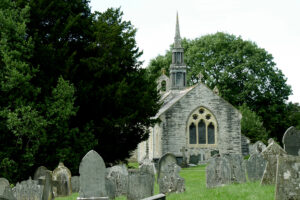 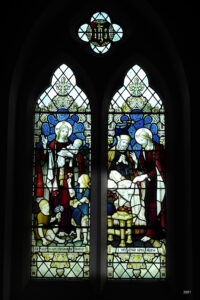 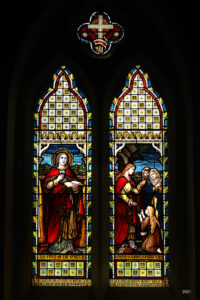 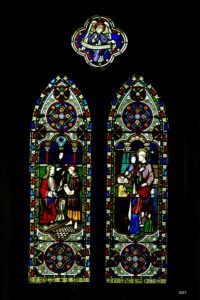 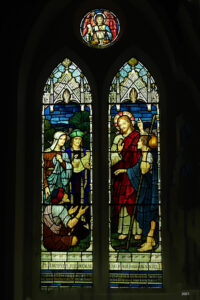 Reason for Listing: Included at II* because of the exceptional quality of the 1830 steeple and near-complete furnishings of 1859.

St Cynllo, Llangoedmor, is a 3-celled church, of small-medium size. It retains an unknown percentage of pre-19th century core fabric.

The present church consists of a long three-bayed chancel, a 3-bayed nave, a south porch and a single-bayed vestry north of the chancel west bay. Construction is in slate rubble, very roughly coursed. Openings are neo-gothic and from 1860 with yellow oolite dressings; the eastern spire is of dressed slate. External pointing and internal plaster are from 1993. Roofs are slated gables; the vestry has a slated lean-to roof.

The chancel was rebuilt in 1830-32 but may retain pre-19th century fabric. The 3-light east window has simple cusped plate tracery, with infill, all from 1860, and similar, 2-light window lie in the north and south walls. Also in the north wall is a 2-centred, moulded doorway into the vestry which is also from 1860. The western of the 2 south wall windows is inserted through the blocking of a former doorway, date?. The deep, 2-centred moulded chancel arch includes a sedilia within its northern stop, all rebuilt in 1860. Externally, a fine, unusual, neo-Classical spire in dressed and moulded slate rises above the arch, and is a 1993 rebuild of an 1830-32 original. The collar-rafter roof is concealed by a 3-centred plaster ceiling, also from 1860. The passages are quarry-tiled, with suspended board floors, from 1860.

The nave was also rebuilt in 1830-32 but it too may retain pre-19th century fabric. The walls have a low, external offset, and a low raking buttress lies at the east end of each side wall, 1830-32?. There are 2 windows in each of the side walls, and one in the west wall, from 1860 and like the chancel side wall windows but uncusped. The south door was rebuilt in 1860 and has a moulded, 2-centred surround. The plain, gabled single bellcote has a datestone from 1891. The roof is concealed by a softwood-framed ‘wagon-roof’ ceiling from 1860. The passages are flagged, with suspended board floors, from 1860.

The south porch is from 1860. It has an external offset like the nave, and a plain oolite string-course. The door has a plain, 2-centred surround. The roof is ceiled like the nave roof, and the floor is flagged as the nave, all from 1860.

The vestry is also from 1860 and is lit by a contemporary cusped, 1-light window, without tracery, in the east wall and entered from the exterior by a Caernarfon-headed door in the west wall. There is a similar internal recess and fireplace in the south wall; the latter leads to a shouldered chimney stack with a gabled cowl, all from 1860. The lean-to roof structure is concealed by a plasterboard ceiling; the floor is quarry-tiled, all 1860.

A medium-depth external drain,  revetted in areas, runs along the north and east walls. An earthwork platform lies beyond the south-west corner of the church, probably modern and associated with the path. The floor is suspended over an underfloor void in the chancel, nave and vestry. Many external burial vaults, memorials and burial earthworks lie significantly close to the south and east walls.

The church lacks contemporary detail and it is not possible to date the core fabric; however, in terms of their construction the chancel and nave appear post-medieval, and there are suggestions that the church was (re)built in the 17th – 18th century (Hodges, 1994; Salter, 1994, 22). The rebuild of 1830-32 probably retained at least the core fabric. The south porch and vestry are from 1860.

It was ‘rebuilt’ in 1830-32, in the ‘later style of English architecture’ (Hodges, 1994; Lewis, 1833), under the architect David Evans of Cardigan, Fishguard and Eglwyswrw. The extent of the rebuild cannot be fully defined, but the present form of the church, including the eastern spire, was established. The church apparently had sash windows (Hodges, 1994). The tithe map depiction of the church suggests the presence of a south porch in 1839 (NLW, Llangoedmor, 1839).

The church was restored in 1860 to the designs of the architect R. J. Withers, of London (Hodges, 1994). The vestry was built and the south porch (re)built. The church was entirely refenestrated and the chancel arch and doors were rebuilt. It was refloored. It may have been reroofed; the present ceilings, at least, were inserted. The interior was reseated and replastered.

The western bellcote was added in 1891, built new? or to replace an earlier structure?.

The square, cushioned font bowl may be medieval, but was retooled in the 19th – 20th century.

Reason for Listing: Included at II* because of the exceptional quality of the 1830 steeple and near-complete furnishings of 1859.

St Cynllo, Llangoedmor, was a parish church during the medieval period (Rees, 1932), of the medieval Deanery of Sub-Aeron. The rectory was a possession of the Premonsratensians of Talley Abbey (Owen, 1894, 46, 50). In 1546 the churches of Mwnt and Llechryd lay within the parish, as free chapels (Jones, 1934, 141).

In 1833 the living was rectory in the patronage of the Principal and Tutors of St Davids University College, Lampeter, rated in the king’s books at £12 18s 6½d (Lewis, 1833).

In 1998 St Cynllo, Llangoedmor, was a parish church. The living was a rectory, held with Llandygwydd, Cenarth, Cilrhedyn and Llechryd (Benefice 807) in the Archdeaconry of Cardigan, Rural Deanery of Emlyn (St Davids, 1997-8).