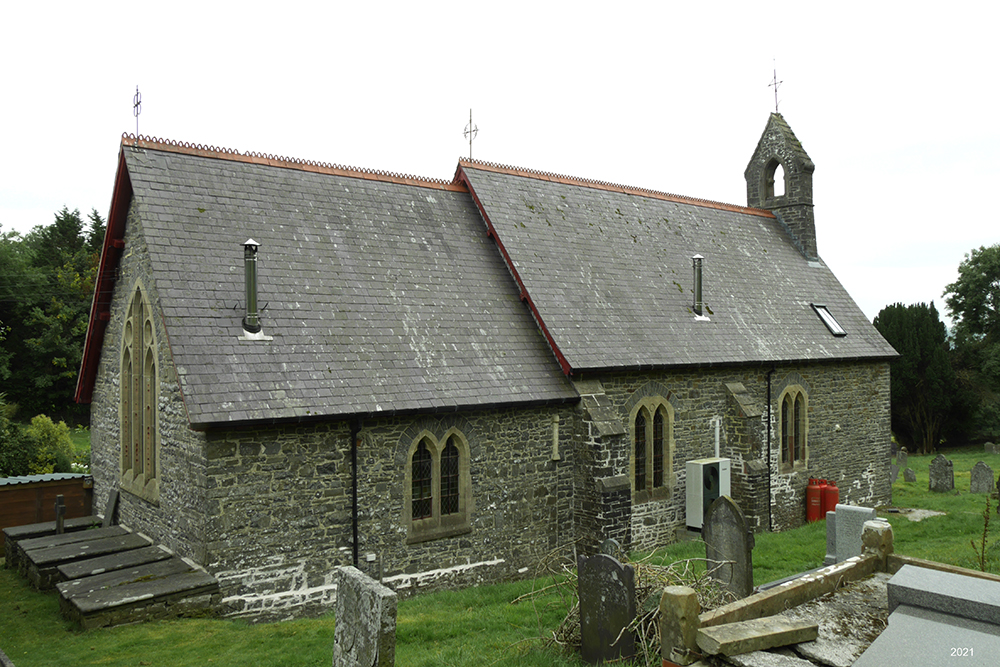 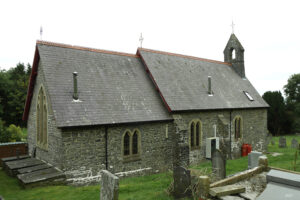 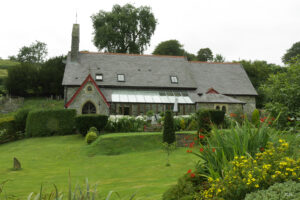 Converted into a Residential Building.

2021 Note: Grave Yard still the property of the Church in Wales sadly it is in a poor condition.

St Cynllo, Nantcwnlle, is a 3-celled church, of small size. It was probably rebuilt in the earlier 19th century, in the same location as its predecessor (PRN 4787) and was extended and restored in 1886 under the architect A. Ritchie of Chester (NLW, SD/F/509).

The present church consists of a 2-bayed chancel, a 3-bayed nave which was extended by one bay in 1886, a south porch and a single-bayed vestry south of the chancel west bay. Construction is in local rubble, refaced in 1886; plastered within. All dressings are in grey oolite and from 1886, including the chancel arch; the openings are neo-gothic comprising cusped double lancets and cusped 2- and 3-light windows with simple tracery. The north side is buttressed, 1886. There is an external string-course around the porch, 1886. The 1886 vestry fireplace is disused, its chimney gone. A simple, gabled single bellcote lies at the west end. The roofs are slated gables; the vestry has a slated half-hipped roof. Floors are suspended, but over solid infill,  except in the porch.

The pre-1886 restoration church is shown in plan and elevation in the 1886 faculty bundle (NLW, SD/F/509) and in a pre-1886 drawing reproduced in Evans, 1915, 77. It appears to have been a construction of the early 19th century exhibiting no evidence of having retained any earlier fabric. It comprises a single cell, the chancel and nave without any structural division.  It was entered through a semi-circular headed west door with steps down to the nave floor; a similar door lay at the east end of the south wall. There was a window in the north wall, 3 in the south wall and one in the east wall; all had simple 2-centred heads and timber Y-tracery. A simple, single gabled bellcote with a semi-circular-headed opening lay on the west end.

The church was restored in 1886 to the designs of the architect A. Ritchie of Chester (NLW, SD/F/509). The restoration was high-impact. The west wall was removed, the nave was extended west by one bay, with a new bellcote, and the south porch and vestry were built. It appears that the remainder of the walls were at least refaced if not rebuilt; the windows were infilled and only the south door was retained. The church was refenestrated and 2 buttresses were built against the north wall. The church was reroofed, refloored (the new floor 0.3m higher than the old), and reseated.

There is a deep, wide external cutting along the north side and a corresponding earthwork platform beneath the southern half of the church, possibly primary but the cutting was deepened and widened in 1886. The floor levels were raised in 1886, suspended over solid infill above the old floors. Some memorials lie significantly close to the east wall.

Converted into a Residential Building.

Grave Yard still the property of the Church in Wales and is a poor condition.

St Cynllo, Nantcwnlle, was a parish church during the medieval period (Rees, 1932), of the medieval Deanery of Ultra-Aeron. It was a possession of the Bishop of St Davids, lying at the centre of an episcopal grange, as a prebend of the collegiate church at Brecon valued at £7 6s 8d (Lewis, 1833).

In 1833 the living was a discharged vicarage in the patronage of the Bishop, rated in the king’s books at £3 13 4d, endowed with £600 royal bounty and £600 parliamentary grant (ibid.) The tithes were divided between the prebendary and the vicar (ibid.).

In 1998 St Cynllo, Nantcwnlle, was a parish church. The living was a vicarage, held with Llanfihangel Ystrad, Cilcennin and Trefilan (Benefice no. 698) in the Archdeaconry of Cardigan, Rural Deanery of Glyn Aeron (St Davids, 1997-8).

The church has, since the early 1990s at least, only been used during the summer months. 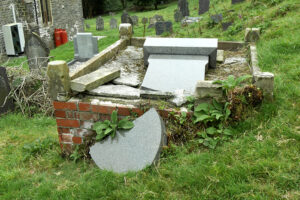