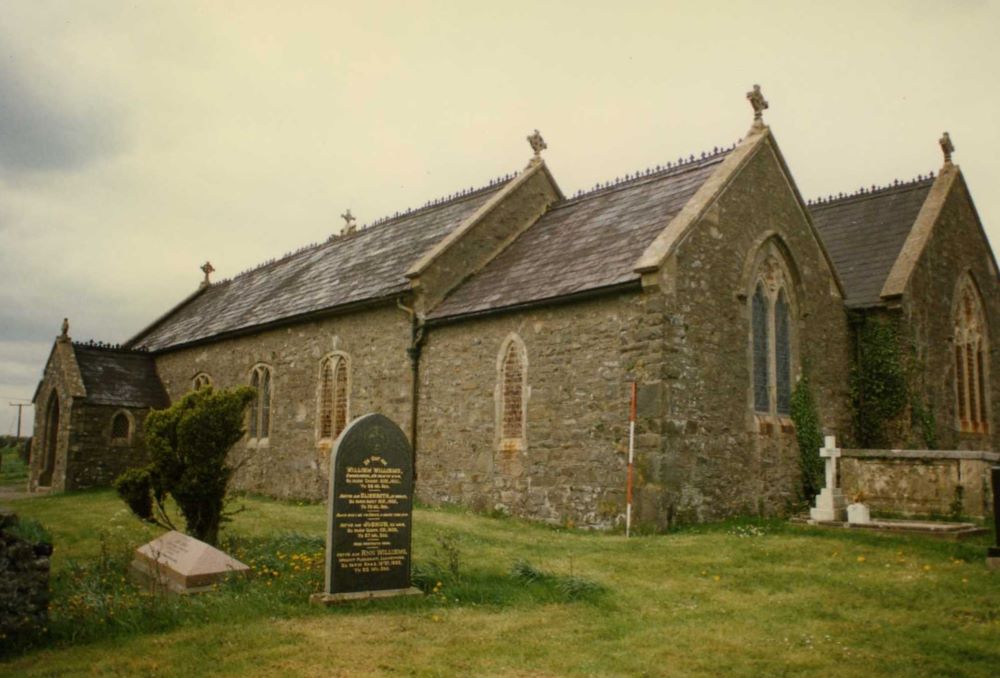 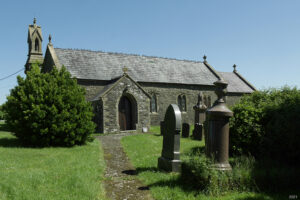 Reason for Listing: Graded at II* as a church retaining its late medieval fabric with late Victorian fittings.

Archaeological potential – very good. Slight, regular earthwork platform beneath 25% of church, primary; shallow, concrete external drain around 10% of church; slight cutting around 5% of church; below-ground floor in 5% of church; suspended floors over a void in 60% of church; external memorials significantly close to 20% of church.

The present church consists of a 2-bayed chancel, a 3-bayed nave, a single-bayed south chapel, a 4-bayed south aisle, a south porch, and a single-bayed vestry north of the chancel west bay. There is also a below-ground coal-cellar north of the nave. Construction is in limestone and Old Red Sandstone rubble. There are some medieval openings but dressings are mainly from the mid-19th century and from c.1880, neo-Gothic, in yellow and grey oolite. The nave retains some pre-19th century pointing but the exterior is mainly ribbon-pointed from c.1880, with some 20th century repointing; the interior is plastered. Roofs are slated gables throughout. There are good late Victorian finishes in the south chapel.

The chancel east gable was rebuilt above eaves level in c.1880. The east window is all from c.1880 and has 3 lights with elaborately cusped ‘curvilinear’ tracery beneath a 2-centred drip-mould. The north wall is pierced by a 2-light window with simple ‘curvilinear’ tracery and a hoodmould on ballflower stops, all similarly from c.1880. The plain, 2-centred chancel arch is without detail but may be 17th century? or a rebuild of the mid 19th century? (see below). The simple, softwood collar-rafter roof is matchboarded above, all c.1880. The floor has good patterned tiles, from 1880.

The nave north wall is in very random rubble with pre-19th century pointing. It is lit by three 2-light windows with segmental outer arches; the eastern 2 are in brick while the western is in stone, but all are probably mid 19th century, with infill. Each contains a simple, uncusped 2-light window with sunk spandrels in a segmental surround, all probably contemporary with the openings and mid 19th century. Between the eastern windows is a tall, rectangular area of blocking, in cement, which may represent the repointing of an older blocked opening. In the nave west wall is a blocked doorway with a plain, rounded, 2-centred head but no surround, from the 13th century?. Much of the west gable was rebuilt in c.1880 with a contemporary elaborate bellcote; the bellcote is in yellow oolite ashlar, with stepped corbels from the west wall, and coped back to a gableted ‘turret’ with a 2-centred opening in all 4 faces, partly cusped. The nave is roofed as the chancel, and at the same level, c.1880. The passages are quarry-tiled over a void, with suspended board floors, all c.1880.

The south chapel communicates with the chancel via a depressed, segmental-pointed arch with a wide, chamfered section, from c.1880; its eastern respond is a plain stop, but to the west it lies upon a massive, double-cylindrical oolite pier, from c.1880 and with a simple abacus and torus. It also communicates with the south aisle, through a plain, 2-centred arch very like the chancel arch, also 17th century?, or rebuilt?; the northern respond is represented by the double-pier described above, which is here an insertion. Externally, the chapel displays very large quoins.  The eastern gable was largely rebuilt in c.1880 like that in the chancel, with a similar, 2-light window. The south wall is pierced by a single, cusped lancet, also from c.1880; to the east a large, segmental-headed, blocked window is visible externally, possibly from the mid-19th century and blocked in c.1880. There appears to be a vertical joint in the centre of this wall, corresponding to the east end of an external earthwork platform (see below). Roofed and floored as the chancel.

The south aisle communicates with the chancel west bay, and with the nave, through an arcade of 4 plain, depressed arches on equally plain square piers, with slight chamfers. They may be post-medieval, 17th century?. The south wall is pierced by 3 windows like those in the nave, mid 19th century. In the west bay is the south door, which has a chamfered 2-centred surround probably from c.1880; the west window is like that in the south chapel but with ogival heads and also from c.1880.

The south porch was added in c.1880 and is in snecked, ‘rustic’ limestone rubble. The 2-centred doorway has a contemporary, double-chamfered surround and there is an uncusped, wide single lancet in each of the side walls. The softwood roof lacks trusses and is matchboarded, also from c.1880 as is the quarry-tiled floor laid directly on the substrate. The vestry is of similar construction and is contemporary. It is lit by 2 cusped single-lancets in its north wall, and entered from the churchyard through a doorway in its west wall with a semicircular surround, in chamfered oolite, which may be later. Roofed and floored as the porch.

There is a slight, regular earthwork platform beneath both the chancel and south aisle. A shallow, concrete external drain runs along the south aisle south wall. The external coal cellar against the nave north wall is entirely below ground, with low masonry walls and a concreted flat-roof with iron doors; a slight cutting leads away westwards. Floors are suspended over a void in the nave and south aisle. External memorials, including a family tomb, lie significantly close to the east and west walls.

The church is difficult to date precisely in the absence of detail. The nave, however,  may be 13th century, along with its blocked west door. The long chancel may have been added or extended in the 14th century. The south aisle arcade may be 17th century, and there is no joint between the aisle and the south chapel suggesting that both may be 17th century; however, the east half of the chapel may be a later extension lying beyond a possible joint and the terminus of the external platform. Both the aisle/chapel arch, and the chancel arch, may also be 17th century, or rebuilds of the mid 19th century. The vestry and south porch are 19th century.

There was some restoration in the mid 19th century when the nave and aisle received their present fenestration.

The church was restored again c.1880 (RCAHM, 1917, 171-2) but the exact date, and the architect responsible, are unknown. The south porch and vestry were added. The chancel and end walls were refenestrated, and the south chapel arch was rebuilt. The south door was probably rebuilt. the bellcote was (re)built. The church was reroofed, refloored, reseated and replastered. The external vestry door may be later.

The coal-cellar was excavated in the early-mid 20th century.

The chancel fittings, the softwood pews and pulpit are all probably from c.1880. The south chapel, known as the ‘Coombe Chapel’, is decorated with a combination of painted tiles with a mosaic infill forming a distinctive mural, from the late 19th century. This was in rather poor condition 16/5/96 but it was understood that grant-aid for its restoration had been applied for.

The font has an octagonal bowl and stem, and is modern, probably from c.1880.

The cropmark of a concentric enclosure (Dyfed PRN 11821), in the field immediately south-west of the churchyard, has been identified by Dyfed Archaeological Trust from aerial photographs (Various, 1994, 405); the feature may be pre-conquest, and associated with a ‘banjo’ enclosure immediately west again (Dyfed PRN 11799).

St Cynog, Llangynog, was not a parish church during the post-conquest period (Rees, 1932), but a chapelry of Llanstephan parish in the medieval Deanery of Carmarthen.

Llangynog had become a parish by 1833 when the living, a perpetual curacy, was annexed to that of Llanstephan (Lewis, 1833).

In 1998 St Cynog, Llangynog, was a parish church. The living was a vicarage, held with Llangain and Llanllwch (Benefice no. 803) in the Archdeaconry of Carmarthen, Rural Deanery of Carmarthen (St Davids, 1997-8).