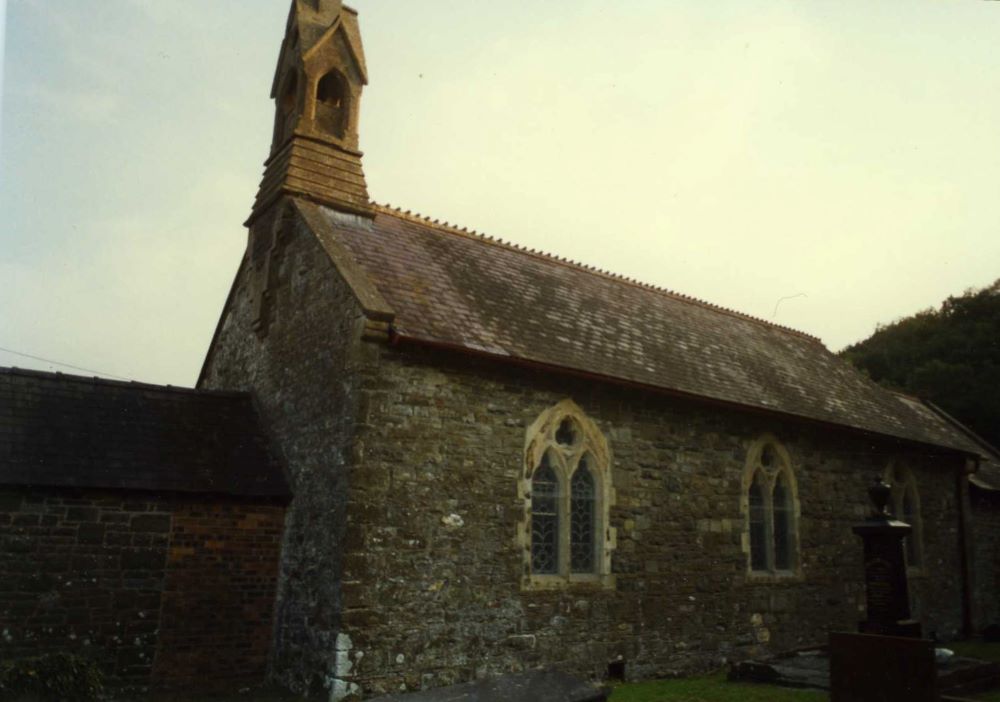 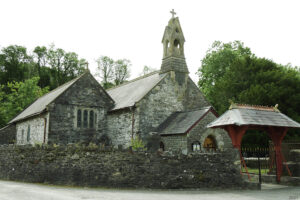 Reason for Listing: Graded II* as a late medieval church retaining the arcade and most of the windows. Notable also for the C19 restoration by J P Seddon, especially the E window glass.

The present church consists of a 2-bayed chancel, a 3 bayed nave, a 3-bayed north aisle opposite the chancel west bay and the nave east bays, a west porch and a coalhouse north of the north aisle east bay. Construction is in local rubble; dressings are in limestone and from c.1600, or in yellow oolite and from 1863. Pointing is from the 18th – early 19th century surviving as render in areas, with some repointing from 1863 and 1922; the interior is plastered. Roofs are slated gables; the coalhouse has a salted lean-to roof.

The chancel east window is of 3 uncusped lights in a square surround, from c.1600. There is a similar, 2-light window in the south wall; a 4-centred doorway to the west, from c.1600?, was blocked in the early-mid 20th century. The 4-centred, moulded chancel arch is from 1863. The softwood roof is from 1863; it is without trusses, all common rafters having collars arch braced from wall-plates. The floor was quarry-tiled in the early-mid 20th century..

The nave is lit by 3 windows in the south wall, of 2 cusped lights with Geometric tracery from 1863, when the upper ¾ of the wall was substantially rebuilt/refaced. A low internal buttress has been built against the north wall, in 1863?, to support a reset, crude medieval stoup. The west door was rebuilt in 1863. Above it is a single, gabled bellcote on stepped corbelling which exhibits 4 gableted openings, from 1863. The nave is roofed as the chancel, from 1863. The passages are carpeted but are probably quarry-tiled, from 1863; the boarded floors are suspended.

The north aisle is separated from the chancel and nave by a 3-bayed arcade of segmental, double-chamfered arches on octagonal piers, without stops and with square bases, from c.1500. The east wall has a window like the chancel east window and also from c.1600. In the north wall are 2 blocked windows, both exhibit the remains of square surrounds from the earlier 19th century (post-render); to the west is an open window like that in the chancel south wall and similarly from c.1600. In the west wall is a blocked doorway with a 4-centred surround from c.1500. There is a pair of internal sockets in the south wall pier corresponding with the chancel arch, for a former timber screen?; the aisle east bay was formerly used as a vestry and there is a blocked fireplace in the north wall (chimney gone), from 1863. The aisle is roofed as the chancel, from 1863. The floor is unknown, being fully covered, but there is a void below.

The west porch was originally in brick, and early 19th century. It was extended to the west in 1863 and the north wall brickwork has been replaced by a window with timber ‘Y’ tracery, 20th century. The 2-centred doorway, softwood collar-rafter roof and quarry-tiled floor are all from 1863.

The coalhouse is from c.1900 and has a plain door to the churchyard in the west wall, and a lean-to roof up to the eaves of the north aisle.

There is a large, deep, brick-lined drainage sump just beyond the north-east corner of the chancel, 19th – 20th century and in an area of much disturbance. A gravel soakaway runs around the south walls, 20th century. A wide, shallow earth cutting along the north wall leads to the coalhouse, early 20th century. Earthworks adjacent to the east end may represent building debris, from the 1863 restoration?. Floor levels are unchanged. There is an underfloor void. External memorials lie significantly close to the east walls.

The chancel and nave are medieval but lack detail. The north aisle is from c.1500. The west porch was added in the early 19th century and was extended to the west in 1863. The coalhouse is from c.1900.

The original, brick west porch, and 2 former north aisle windows, were from the earlier 19th century. The pre-restoration church was described in 1855 (Glynne, 1898, 363). It differed little from the present church, but the medieval chancel arch was still present and was ‘rude’. There were ‘very few windows to the north; some windows bad, with sashes’, from the earlier 19th century and their (blocked) remains can still be seen. The ‘plain Perpendicular (window), square-headed of three lights’ in the north wall is still open. The chancel had a ‘rude’ panelled, boarded ceiling and the north aisle had a boarded coved ceiling with and ‘embattled’ cornice.

The church was restored in 1863 (Williams, 1915, 4). The restoration was low-medium impact. The chancel arch was rebuilt and the nave south wall was rebuilt/refaced and fenestrated. The bellcote was rebuilt. The early 19th century north aisle windows were blocked. The church was reroofed and refloored.

The softwood pews and pulpit are from 1863. The organ is later 19th century.

The church was again restored in the early-mid 20th century when the chancel was refloored, its south door was blocked and the oak reredos, altar rail, free-standing stalls and the ?aisle screen were fitted. This work may not all be contemporary; the door had been blocked by 1917 (RCAHM, 1917) while some may be contemporary with external cement repointing incised ‘1922’. The vestry screen at the west end of the north aisle is probably broadly contemporary.

The limestone font has an octagonal bowl, stem and base and is from 1863; in 1917 the original font was apparently observed attached to the western end of the aisle arcade in 1917 (RCAHM, 1917).

St Cynwyl, Cynwyl Elfed, was not a parish church during the medieval period (Rees, 1932), but a chapelry of Abernant parish in the medieval Deanery of Carmarthen. In 1284 Maredudd ap Rhys Maredudd granted Abernant, with its appendent chapel at Cynwyl Elfed, to Carmarthen Priory (Anon., 1915, 14); the grant was confirmed by Bishop Bek of St Davids in 1290 (ibid.). They had previously (c.1197), and illegally, been granted to the Priory by William de Braose (Evans, 1876, 98).

In 1998 St Cynwyl, Cynwyl Elfed, was a parish church. The living was a vicarage, held with Newchurch (Benefice no. 692) in the Archdeaconry of Carmarthen, Rural Deanery of Carmarthen (St Davids, 1997-8).