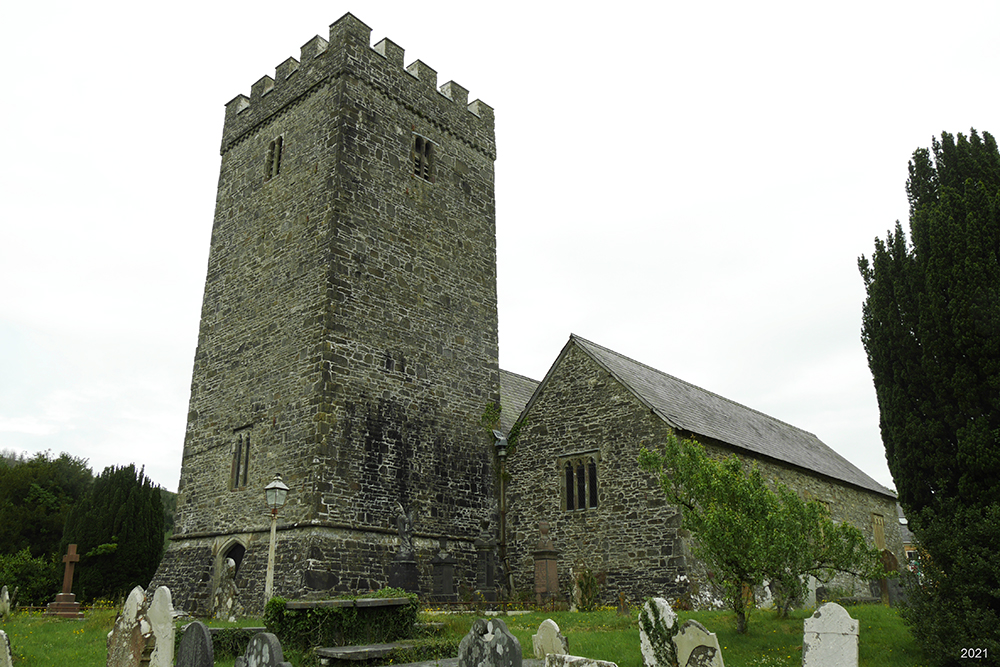 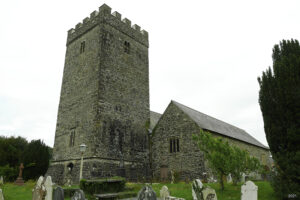 The present church consists of a 4-bayed chancel/nave without structural division past or present, a 4-bayed south aisle, a 3-storeyed west tower and a storehouse north of the tower. Construction is in local mixed rubble. There are medieval dressings, in limestone; other dressings are in yellow oolite and purple sandstone, neo-Perpendicular, from both 1858 and 1891 but more-or-less replicating the original dressings. There is some 1858 pointing, but pointing is mainly from 1891 with some 20th century ribbon pointing. The interior is roughcast, later 20th century, except the tower interior which has pre-1858 limewash. Roofs are slated gables, the chancel/nave north slope with stone-tiles; the storehouse has a slated lean-to roof and the tower roof was not seen..

The chancel/nave east gable may have been partly rebuilt after 1891. The 3-light east window is entirely from 1858, and has a purple sandstone, cavetto-moulded 2-centred surround and a drip-mould on out-turned stops which with the Perpendicular tracery are probably copies of the original window of c.1500. Internally, the east wall has a moulded string course at sill level, 1891?, while the east bay south wall features a piscina with a square surround and cavetto-moulded hoodmould, a 4-centred head with sunk spandrels, and a chamfered shallow ‘bowl’, all purple sandstone and from 1891 but possibly copying an original of c.1500. There are 3 windows in the north wall, all from 1891 but probably replicating at least the style of the originals; all have 3 cusped, ogee-headed lights with sunk spandrels, in square surrounds with cavetto-moulded labels, in purple sandstone. The softwood ‘wagon-roof’ ceiling is matchboarded and from 1891; the southern slope has 2 dormer windows inserted in the 20th century. The passage was flagged over heating ducts, and with an underground chamber for a ‘Porritt’s stove’, in 1891, re-using earlier flags; the woodblock floors are also from 1891.

The south aisle communicates with the chancel/nave through a 4-bayed arcade pierced through the latter’s south wall in c.1500; the 2-centred arches are plain, rounded, lying on plain, square piers; the eastern pier is wider than the other two. The rubble construction of its external walls features more igneous components than in the chancel/nave. The east wall window has a rear arch from 1891, but the window itself is from c.1500, similar the chancel east window but in cavetto-moulded limestone, the mullions replaced in grey oolite in 1891. The uppermost courses of the south wall were rebuilt/heightened in 1858. It is pierced by 3 windows from 1858 but probably replicating at least the style of the originals; all are as the north wall windows but in yellow oolite. The south door has a purple sandstone 4-centred surround and similar cavetto-moulded dripmould on out-turned stops, with the surrounding infill from 1891, on site of an earlier door and replicating its (mid 16th century) detail?. The west wall has an external basal batter; the west window has a rebuilt segmental rear-arch but the square surround and cavetto-moulded label, the 3 cusped, 2-centred lights with sunk spandrels are in limestone from the mid 16th century. The aisle is roofed as the chancel/nave but without dormer windows, 1891. The floor is flagged throughout, from 1891 but re-using earlier flags.

The west tower is from the mid 16th century and comprises 3 storeys. It contains some limestone rubble and is of later Perpendicular character. It has the external batter up to a string-course typical of the region. A square spiral stair turret projects from the eastern half of the north wall, entered through a doorway with a chamfered 2-centred surround, and lit by simple loops. The ground floor communicates with the nave through a plain, 2-centred arch, mid 16th century; a plain, square door into the second stage lies above, also mid 16th century?. The west door has a 4-centred head in a chamfered, square surround with a drip-mould produced from the string-course, all mid 16th century; the concrete ‘typanum’ is 20th century. Internally, a stoup with a plain square ORS bowl, ‘which never runs dry’, lies in the south wall; it may not be in situ; the yellow brick flue from the ‘Porritt’s’ stove of 1891 runs up the south-east corner. The mid 16th century barrel-vault has a 2-centred profile, with a secondary bellrope hole. The floor is flagged as the nave and aisle, re-used in 1891, and features 3 steps up to the nave. The second storey is lit by a slit-light in the east wall, a single light in the north wall with a semicircular-headed surround; a single light with a square head, surround and label lies in the west wall. All are in limestone from the mid 16th century. The belfry stage has 2-light openings with semicircular heads and surrounds in all 4 faces, in limestone again from the mid 16th century; that in the south wall has a dripmould. The crenellated parapet lies on a corbel table, all from the mid 16th century but restored in 1891. The crenellations have rebuilt copings.

A small storehouse was built against the stair turret in the mid 20th century, in local rubble. It has a simple square door to the north, and a slated lean-to roof up to the turret.

A deep, wide revetted external cutting runs around the north and east walls, becoming shallow along the south wall; primary, but secondarily deepened in 1891 and extended along the south wall. There is no evidence for floor level changes. Floors are suspended over heating flues in the nave and aisle. There is a below-ground heating chamber in the nave. External memorials lie significantly close to the south aisle, and a large family vault from 1815 is built against the east end of the north wall.

The chancel/nave may be 14th century but in the absence of any detail, or a chancel arch, cannot be closely dated. The south aisle is secondary, butting against the south-east corner of the chancel with a full-height joint, and is probably contemporary with its Perpendicular windows dating from c.1500. The south aisle west wall (and the side walls, if the present windows are copies), were refenestrated in the mid 16th century and the west tower may be contemporary. The whole plan-form is that of the ‘typical’ North-east Carmarthenshire church as fully developed at the end of the medieval period.

The church interior was still ‘out of repair’ when visited by Glynne in 1850 (Glynne, 1898, 362).  He noted that the original east window was 3-light, with ‘Third Perpendicular’ tracery; most the others were ‘square headed, of 2 and 3 lights, some labelled, some not’. The roofs were ceiled and the tower arch had been partly blocked.

The church was restored again in 1891, to the designs of the architect Ewan Christian of London (Anon., 1890, 149-50). The north wall windows were replaced in purple sandstone, the south door was similarly rebuilt (Cadw, 1995, 2), and the church was reroofed, refloored and reseated. New drainage was cut, the tower arch was reopened and a ‘Porrit’s’ heating stove was installed (Anon., 1890, 149-50).

The storehouse was built against the tower in the mid 20th century, and is not marked on earlier Ordnance Survey maps. The internal roughcast and dormer windows are also 20th century.

The ECM now built into the facework of the north wall, a Latin inscribed stone, formed the sill of the west (or south?) door until 1858 when it was moved to its present position (ibid.).

In 1998 St Cynwyl, Cynwyl Gaeo, was a parish church. The living was a vicarage, held with Llansawel and Talley (Benefice no. 612) in the Archdeaconry of Carmarthen, Rural Deanery of Llangadog and Llandeilo (St Davids, 1997-8).