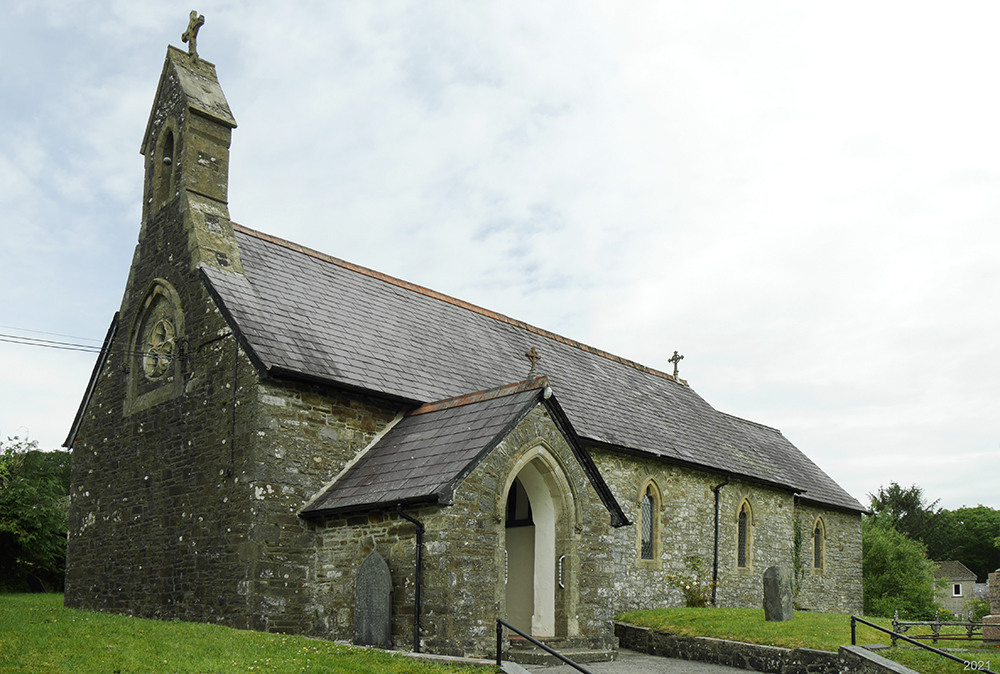 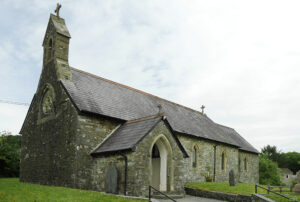 Archaeological potential – very good. Deep, wide external cutting around 80% of church, primary; suspended floors over a void in 70% of church.

St Mary, Pencader, is a 3-celled church, of small size. It was almost entirely rebuilt in the early 19th century on the same site, and in the same location as the earlier church, retaining only the footings. It was restored in 1885 and extended west in 1906.

The present church consists of a 2-bayed chancel, a 4-bayed nave, a south porch and a single-bayed vestry north of the chancel west bay. Construction is in random limestone rubble, with some Old Red Sandstone; there is some brick in the vestry. The chancel and the 3 nave eastern bays are probably from the earlier 19th century and exhibit the remains of contemporary external render. Repointing is largely from 1885 and ribboned. Openings are neo-Gothic; the windows are mainly cusped, single lancets with dripmoulds, in yellow oolite, from 1885 and 1906. The nave west wall carries a gabled, shouldered, single bellcote, from 1906. The roofs are slated gables; the vestry has a slated lean-to roof. The floors are suspended.

The 3 nave eastern bays, and possibly the chancel, were built upon the truncated remains of the earlier, ?medieval church; the nave south wall can be seen to lie on a battered base in very random rubble, clearly distinct from the rest of the walling and featuring a very large basal stone at the south-east corner, and a few courses of similar rubble lie beneath the chancel south wall.

The church was restored (not rebuilt) in 1885, to the designs of the architect E. H. Lingen Barker (Evans, 1917, 7; Yates, 1974, 69). The vestry was added. The church was refenestrated (with infill), reroofed and refloored. The interior, with its 3 brass hanging lamps, has been called a successful late 19th century ‘period piece’ (Yates, op. cit., 68). The church was probably entered through a west door.

The nave west bay (with the bellcote) and the south porch were not added until 1906 (NLW, SD/F/6) which dates at least some of the internal fittings (see above). Fabric and detail are in an identical style to the 1885 work but the joint between the two can be seen; the nave extension side walls feature copies of the 1885 windows and there is a ‘rose’ widow in the west wall.

The vestry was extended westwards in brick, including a doorway to the churchyard, after 1906 but during the earlier 20th century.

A deep, wide external cutting, primary, secondarily extended, runs along the north, south and west walls. Floors are suspended over a void in the nave and vestry.

A crude limestone shaft immediately south of the church may represent a cross-base.

St David, Abergorlech, was a chapelry to Llanybydder parish during the post-conquest period (Rees, 1932), of the medieval Deanery of Carmarthen.

In 1833 the living, a perpetual curacy of Llanybydder parish, in the patronage of the Vicar of Llanybydder, was endowed with £1000 royal bounty (Lewis, 1833).

In 1998 St David, Abergorlech, was a chapelry recently separated from Llanybydder parish. The living was a vicarage, held with Brechfa and Llanfihangel Rhos-y-corn (Benefice no. 569) in the Archdeaconry of Cardigan, Rural Deanery of Llangadog and Llandeilo (St Davids, 1997-8).