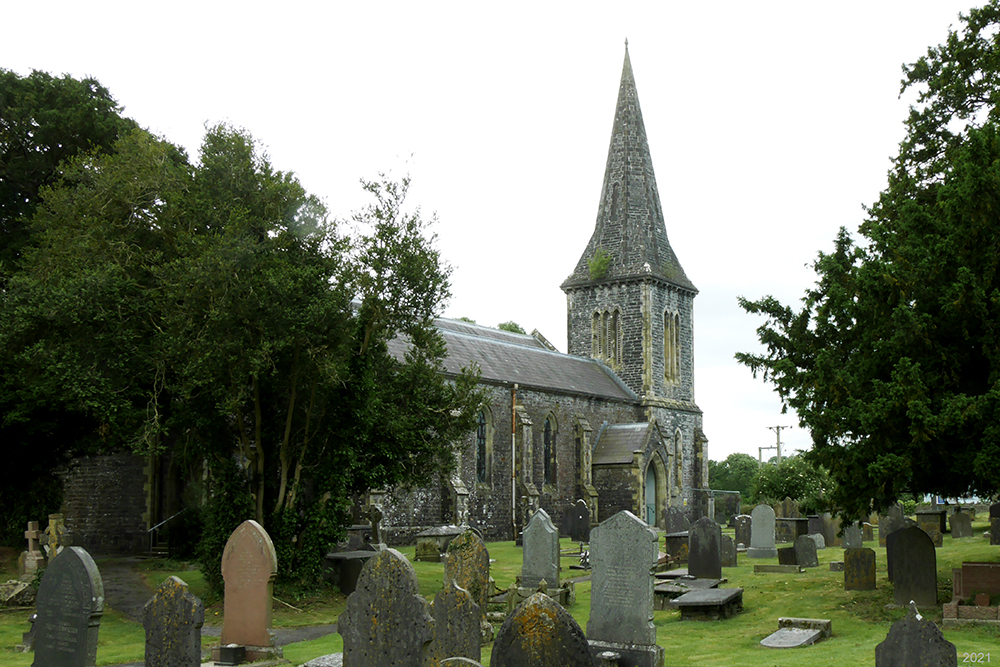 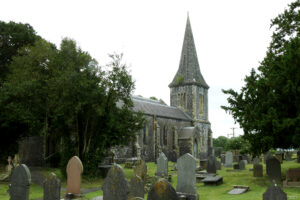 Reason for Listing: Listed as an unaltered mid-C19 parish church, in a style pre-dating the ecclesiological revival, with impressive interior and good detail including a fine collection of wall tablets.

19th century church; 0% medieval core fabric. On site of, but not in the same location as, medieval church (PRN 5372).

St David, Abergwili, is a multicelled church, of large size. It was (re)built in 1840-43 on the same site, but immediately to the north of its predecessor (PRN 5372), retaining nothing from the earlier fabric.

The present church consists of a single-bayed chancel, continuous with a 5-bayed nave, a 5-bayed north aisle, a north porch, a 3 storeyed tower including, and over, the north aisle west bay, a vestry north of the north aisle and a boilerhouse (below-ground) north of the vestry. Construction is in limestone rubble; the interior is plastered. All dressings are in yellow oolite and from 1840-43. The openings are neo-gothic and simple. The exterior is buttressed throughout. A broach spire, in limestone ashlar, lies over the tower. The roofs are slated gables; the vestry and boilerhouse have slated lean-to roofs. The floors are suspended except in the porch. The chancel east wall has an unusual blind internal arcade serving as a reredos.

The earlier church was described, in 1833, as ‘a neat plain building’. Its form can be reconstructed from the sources (Evans, 1905, 63-5; Lewis, 1833; NLW, St Davids Map Book, 1811). The chancel and nave lay to the north, the nave divided from a south aisle by a 4-bayed arcade of pointed arches on ‘massive’ octagonal piers. There was a south porch at the west end of the south aisle, and a transeptal structure at its east end. A double bellcote lay at the west end of the nave. Inside the church was a 16th century stone coffin lid (Anon.,  1849, 150), destroyed when the church was rebuilt.

The church was entirely rebuilt to the designs of the architect C. Nelson in 1840-43 (Yates, 1974, 69). According to Yates it was enlarged under the architect Ewan Christian, of London, in 1889 (Yates, 1974, 69) but nothing can be readily assigned to this period. An organ was inserted into north aisle in 1890 (NLW, SD/F/8). The boilerhouse may have been added in the early 20th century, and is largely below-ground.

The building appears to have undergone no substantial further alteration, but was undergoing thorough renovation including repointing, reslating and selective rebuilding, 26/7/96.

The font is 19th century.

There is no physical evidence for the earlier church. There may be below-ground evidence for the former college. There is neither an external cutting nor drain. The floors are suspended (over heating ducts?). The boilerhouse is below-ground. Some external memorials lie significantly close to the north and east walls.

St David, Abergwili, was a parish church during the medieval period (Rees, 1932), of the medieval Deanery of Carmarthen. It was appropriated to St Davids Cathedral and in 1287 Bishop Bek constituted the church as a college for 22 prebendaries, 4 priests, 4 choristers and 2 clerks (Lewis, 1833). In 1334 Bishop Henry Gower added a precentor, chancellor and treasurer (ibid.); the college had an annual revenue of £42 in the ‘Valor Ecclesiasticus’ of 1536, when it was removed to Brecon (ibid.). It had an annual value of £116 17s in 1809 (Matthews, 1917, 12). Abergwili parish had dependent chapelries at Llanfihangel-uwch-Gwili, Llanllawddog and Llanpumsaint.

In 1833 the living was a discharged vicarage in the patronage of the Dean and Canons of Windsor but the advowson belonged to the Bishop of St Davids by courtesy (Lewis, 1833). The benefice was rated in the king’s books at £3 6s 8d, endowed with £200 private benefaction and £200 royal bounty (ibid.).

In 1998 St David, Abergwili, was a parish church. The living was a vicarage, held with Llanfihangel-uwch-Gwili and Capel-y-Groes (Benefice no. 681) in the Archdeaconry of Cardigan, Rural Deanery of Carmarthen (St Davids, 1997-8).

The dedication is given as St Maurice by Lewis, 1833, supposedly an early dedication, but the church was referred to as ‘ecclesie sancti David de Abergwily’ as early as 1395 (RCAHM, 1917, 8).

NLW, Maps of the Estates of the Lord Bishop of St Davids, surveyed by W. Couling, 1811.