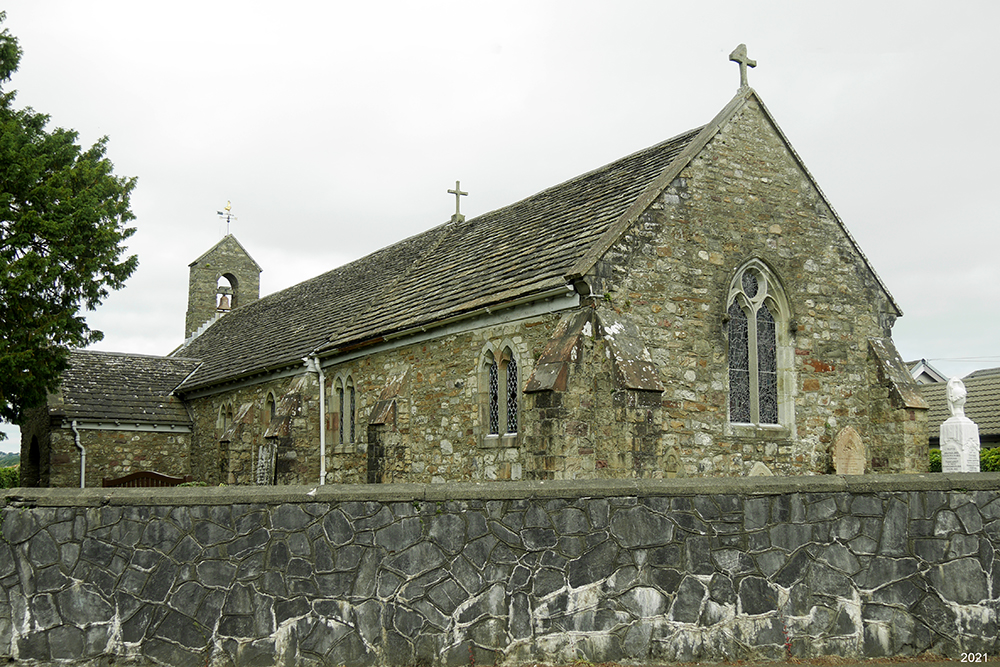 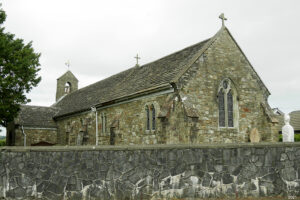 Reason for Listing: Listed as a sole example of medieval church in Betws area, retaining much of its pre-C19 fabric, including surviving ornate roof. Important also in relation to the history of the church in Wales.

The present church consists of a 2-bayed chancel, a 3-bayed nave, a south porch and a single-bayed transeptal vestry north of the chancel west bay. Construction is in local rubble. There are medieval dressings, in limestone, in the porch; most dressings are in grey oolite from 1872. The exterior was buttressed throughout in 1872. Pointing is mainly from 1872 with some repointing from 1951. The interior is roughcast, later 20th century. Roofs are slated gables.

The chancel east wall has coped, cross-buttresses at the corners, from 1872; a similar buttress on the south wall defines the bays. The cusped 2-light east window is entirely from 1872, and has a 2-centred surround with a dripmould, and simple Geometric tracery. There are double lancet windows in both side walls, also from 1872; beneath the eastern of the 2 southern windows is a small, plain semicircular-headed piscina, medieval. The west bay north wall features the vestry door, which has a 2-centred surround from 1872; to the west the wall was removed when the keyboard for the present organ was inserted c.1900. There is no chancel arch, the chancel being entirely open to the nave. The softwood roof has collar-rafter trusses, cusped, from 1872, matchboarded above. The passage is tiled over former heating ducts, with suspended board floors, from 1872.

The nave, however, is wider than the chancel; the area between the north-east corner and the vestry west wall was infilled flush in 1872. The side walls are buttressed externally as the chancel, from 1872. The side walls have windows like those in the chancel side walls, from 1872 and including surrounding infill, but those at the east and west ends of the south wall are single lancets. The south door has a 2-centred, roll-moulded limestone surround, from c.1300. The west wall has medieval buttresses at either end, and is pierced by a doorway with a chamfered segmental surround of 15th century style. Above the door is a plain, circular window inserted in 1872. The simple, single gabled bellcote is given a date of 1696 on a plaque within the church, but may be from 1821 (see below). The roof has oak collar-rafter trusses, cusped and crocketed, re-used in 1872, 1814-16, or earlier? (see below), with softwood purlins and rafters from 1872. The passages are fully carpeted, with suspended board floors, from 1872; a burial vault lies beneath the west end.

The south porch exhibits low, medieval clasping buttresses at the corners. The door has a plain 2-centred arch, from the 14th century?. The roof has oak trusses like those in the nave, 17th century?., softwood above from 1872. The floor is quarry-tiled directly on the substrate, from 1872.

The transeptal vestry was added in 1872. It is entered through the east wall via a contemporary 2-centred doorway, and lit by a double lancet, with a circular light above. There is a recess for a boiler, from c.1950, in the west wall. The softwood, collar-rafter roof is from 1872. The floor is quarry-tiled, from 1872.

The surrounding area of churchyard was truncated in 1872, exposing footings of part of nave north wall; an external concrete plinth from 1872 all round the church occupies a slight cutting. The floor is suspended over heating flues in the nave. A burial vault lies beneath the nave west bay. Few external memorials lie significantly close to the east and south walls.

The nave south door is from c.1300. The chancel may or may not be contemporary; there is no chancel arch. The south porch may have been added during the 14th century.

The pre-restoration church is depicted in a plan of 1872 (NLW, SD/F/34).It comprised the present chancel, nave and south porch, all unbuttressed and lacking a chancel arch. The west door was open, there was a ‘priest’s door’ in the south wall of the chancel, and a third doorway high in the west end of the nave north wall, with an external staircase, led into the gallery. The chancel was lit by single light windows, with timber frames?; there was an east window, 2 windows in the south wall and one in the north wall. Three similar windows lit the nave south wall, while of the 2 windows in the north wall, the western one, adjacent to the pulpit, was larger, later?. Most windows occupied their present locations, but their openings have been entirely rebuilt. The floor was flagged.

The church was restored in 1872. Yates gives the architect as R. Kyrke Penson (Yates, 1974, 67), but the Faculty plans were drawn up by a local architect, John Harries of Llandeilo (NLW, SD/F/34). The vestry was built. The church was refenestrated, the ‘priest’s door’ was blocked and the gallery door similarly blocked and its stairway removed. The exterior received its buttressing. The church was reroofed, re-using some of the existing timbers, and refloored. The gallery was removed. Internal plaster was stripped, and the church was replastered and repointed

An organ was inserted into the chancel west bay in c.1900 and the dividing wall between the chancel and vestry was removed; it had previously featured a recess for a stove (ibid.). The present low-pressure heating plant had been installed in the vestry by 1950 (Carms. R. O., CPR/54/30).

A small, circular stoup bowl, said to have been unearthed from the churchyard (RCAHM, 1917, 10), has been remounted in the porch.

The church may lie within a former, subcircular outer enclosure (Sambrook and Page, 1995 (i), 9).

There some evidence for the pre-conquest religious use of the site:-

St David, Betws, was a parish church during the post-conquest period (Rees, 1932), of the medieval Deanery of Stradtowy. Until 1291, when it passed to Iscennen, Carmarthenshire, Betws lay within the Lordship of Gower and was in the patronage of the Bishop of St Davids (Seyler, 1924, 305-6).

In 1998 St David, Betws, was a parish church. The living was a vicarage, held with Ammanford (Benefice no. 145) in the Archdeaconry of Carmarthen, Rural Deanery of Dyffryn Aman (St Davids, 1997-8).