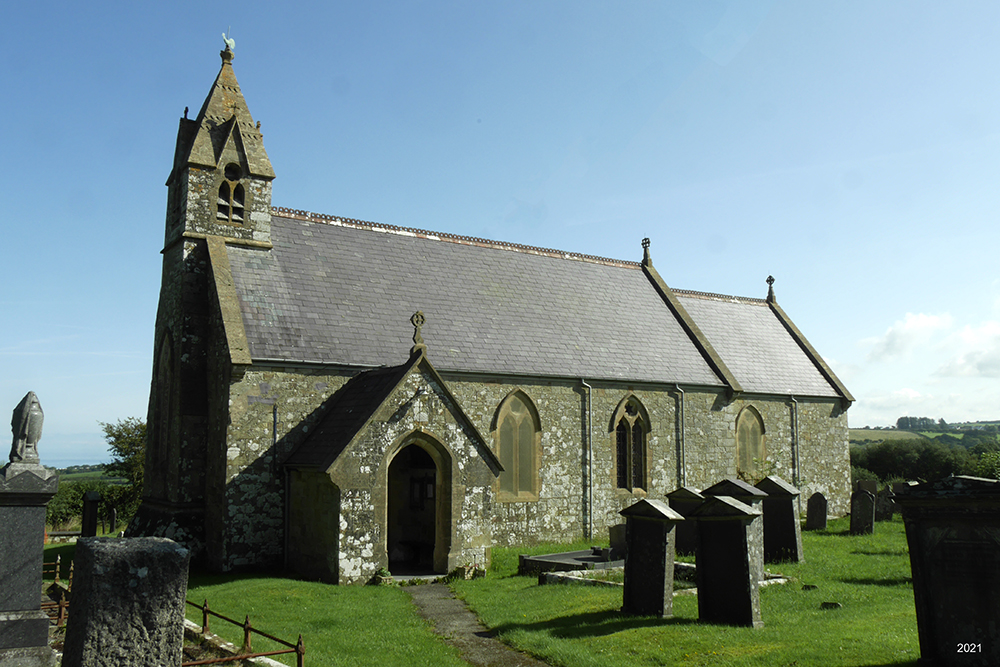 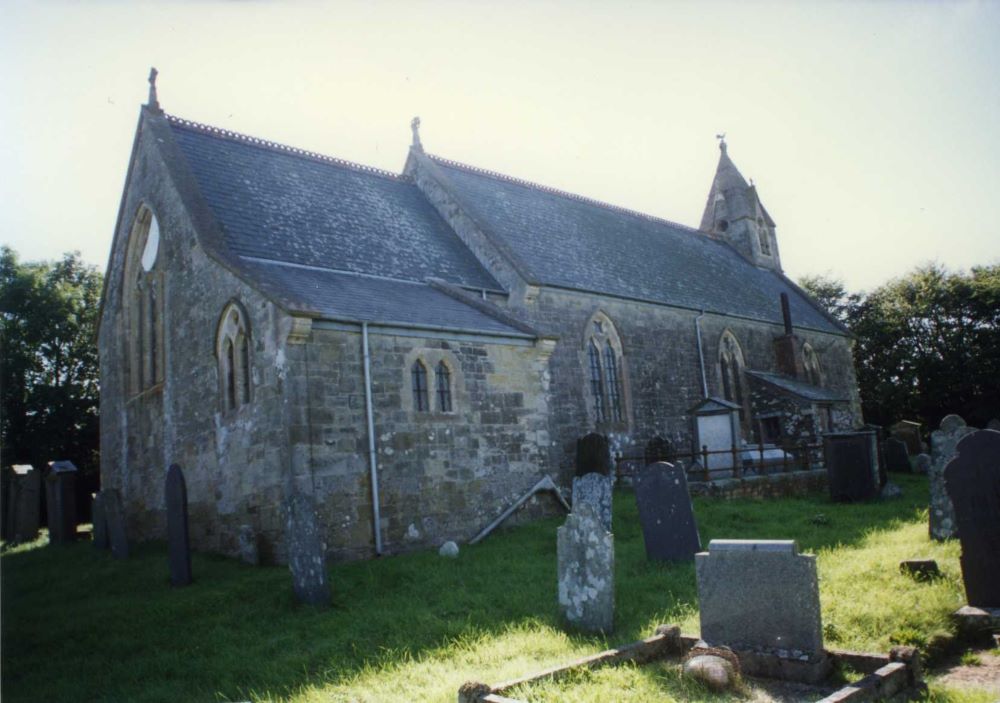 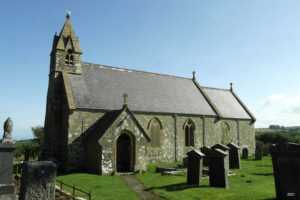 Reasons for listing; Included for exceptionally fine stained glass E window by Lavers and Barraud, and as a good example of a small High Victorian church.

A 3-cell church, small-medium sized. Consists of chancel, 2 bays; nave, 3 bays; south porch, vestry (north of chancel), 1 bay; all 1864-5. Boilerhouse (north of nave), earlier 20th century. Construction is in squared sandstone rubble throughout, with some Caerfai granite. Slate gable roofs; vestry and boilerhouse with slate lean-to roofs. All openings, except in the boilerhouse, are from 1864-5, and neo-gothic with yellow oolite dressings. Western octagonal bell-turret, on buttress, with spire, 1864-5.

St David, Blaenporth, is a 3-celled church, of small-medium size. It was entirely (re)built in 1864-5 on the same site, and in the same location as its predecessor, but nothing was retained from the earlier fabric. A boilerhouse was added in the earlier 20th century.

The present church consists of a 2-bayed chancel, a 3-bayed nave, a south porch, a single-bayed vestry north of the chancel east bay, and a small boilerhouse, partly below ground, north of the nave. Construction, including the boilerhouse, is in squared Pwntan sandstone rubble but the north wall features much Caerfai granite. All dressings are in yellow oolite and from 1864-5; the 2-centred openings are neo-gothic and the 2- 3-light windows are cusped, with simple tracery. There is an elaborate bell-turret at the west end, supported on a broad buttress and in the form of a low oolite spire with 4 openings in gablets, from 1864-5. The boilerhouse has a plain, square brick chimney-stack, earlier 20th century. The roofs are slated gables; the vestry and boilerhouse have slated lean-to roofs. The floors are suspended except in the porch.

The earlier church was described by Lewis, in 1833, as consisting of a chancel, a nave and a south porch which extended to the west end of the nave (NLW, Blaenporth, Tithe Map, 1839). It lacked a bellcote, the bell being ‘suspended at the west end of the roof’ (Lewis, 1833). There was a ‘square hole running right through the north wall’ of unknown function (Anon., 1862, 66).

The church was entirely rebuilt in 1864-5 to the designs of the architect R. J. Withers (Cadw, 1998). The boilerhouse was added in the earlier 20th century; there appear to have been no further major alterations.

A pronounced but irregular earthwork platform runs along the north side, debris from earlier church?; a detached earthwork lies south-west of the nave. There is a shallow, earth-cut external drain. Floors are suspended over heating ducts. The boilerhouse floor is below-ground. No external memorials lie significantly close to the church.

St David, Blaenporth, was not a parish church during the medieval period (Rees, 1932), but a chapelry, of the medieval Deanery of Sub-Aeron, which was in the possession of the bishops of St Davids as a prebend of the collegiate church of Llanddewi Brefi rated in the king’s books at £6 (Lewis, 1833).

Blaenporth had become a parish by 1833 when the living was a perpetual curacy endowed with £800 royal bounty and £800 parliamentary grant, in the alternate patronage of the Earl of Lisburne and J. V. Lloyd Esq., the impropriators of the tithes (Lewis, 1833).

In 1998 St David, Blaenporth, was a parish church. The living was a vicarage, held with Aberporth, Tremain and Betws Ifan (Benefice no. 833) in the Archdeaconry of Cardigan, Rural Deanery of Cemais and Sub-Aeron (St Davids, 1997-8).