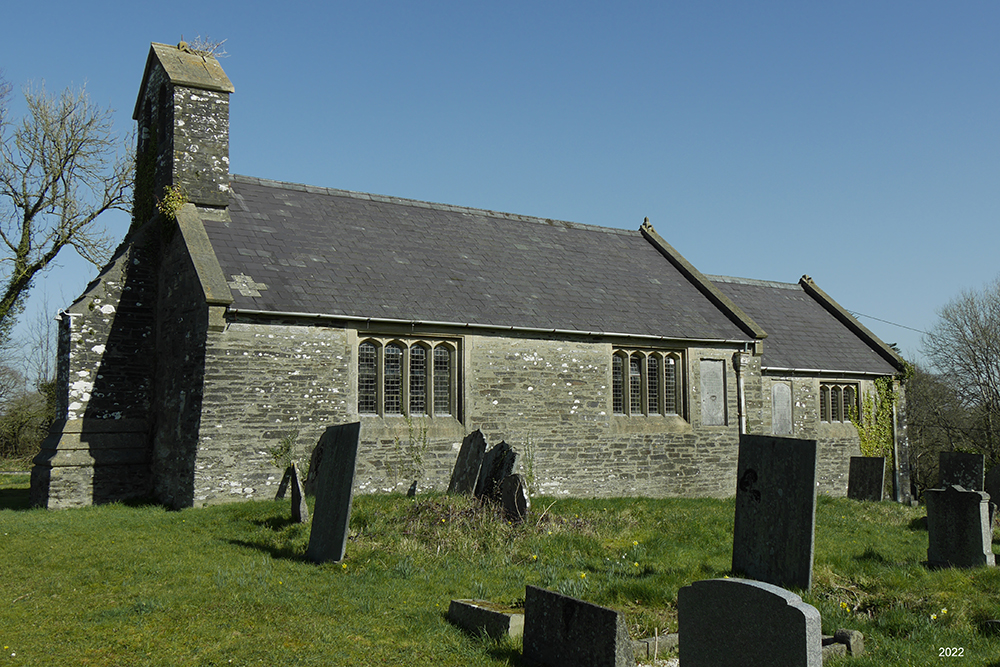 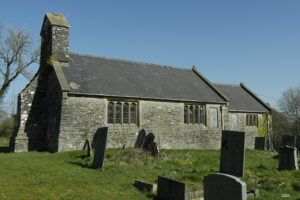 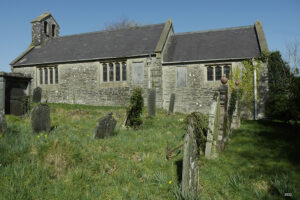 Reasons for Listing. None given.

Archaeological potential – good. Church entirely rebuilt 1886-7, in same location as earlier church above its foundations, which, with replicated detail, constitute the only physical evidence for earlier church; surrounding yard truncated around 50% of church; no external cutting or drain around church; no evidence for floor level changes; underfloor void; no crypt/vault evident, but former heating chamber present?; no evidence of former components beyond church; memorials significantly close to 30% of church.

St David, Bridell, is a 3-celled church, of small size. It was (re)built in 1886-7 (Evans, 1917, 7; NLW, SD/F/55), on the foundations of the earlier church and following its plan, but with additional components. None of the earlier fabric was retained.

The present church consists of a 2-bayed chancel, a 2-bayed nave, a north porch and a lean-to vestry of 1 bay, against the north wall of the chancel west bay. Construction is in Cilgerran slate rubble throughout, roughly squared, with squared quoins. The external ribbon-pointing is 20th century. All internal walls are rendered/plastered. All dressings are in yellow sandstone; the detail is all from 1886-7 and neo-Perpendicular. It includes the chancel arch, the windows, with square surrounds and 4-centred lights, and the 4-centred north and vestry doors. The nave west wall carries an elaborate buttress with an offset, a concave talus and string course at the base, and a coped summit; it was rebuilt in 1886-7 but was an exact copy of the earlier buttress (NLW, SD/F/55). The west gable features a gabled and coped bellcote with 2 semicircular-headed openings, of 1886-7 but again an exact copy from the earlier church (NLW, SD/F/55). The vestry exhibits a plain chimney-stack. The roofs are slated gables while the vestry has a slate lean-to roof, all 1886-7. The floors are suspended except in the porch, and from 1886-7.

The Faculty submission (NLW, SD/F/55) termed the rebuild a restoration; it includes plans and specifications, by the architects Middleton, Prothero and Phillott, of Westminster, Cheltenham and Newport, for a fairly low-impact restoration mainly comprising the refenestration, reflooring and reroofing of the church, and the construction of the vestry and north porch. The chancel arch, existing north doorway and the western buttress were to be retained. In fact, the structural evidence demonstrates that the church was entirely rebuilt; all masonry is visibly 19th century. Significantly, there are also noticeable minor discrepancies. The windows were to be exact copies of the existing windows, but were not; no flue or chimney is mentioned in the specifications; the proposed external drain was not excavated. However, it has been seen above that much of the old detail was replicated in the new church.

There is no physical evidence for the earlier church. The Faculty submission (ibid.) proposed that the yard around the western half of the church be truncated to form a terrace, which was done. No drain or cutting is present. There is no evidence for internal floor level changes. There is an underfloor void beneath the suspended floors. A possible former heating chamber is present, but no further vault or crypt is evident. There is no evidence to suggest the former presence of components beyond the present church walls. Some memorials are significantly close to the south wall of the church.

The pre-1886 church was fundamentally medieval, according to contemporary descriptions. Samuel Lewis, writing in 1833, eulogised thus ‘the church…is an ancient structure, beautifully situated and embosomed among trees..’ (Lewis, 1833). According to an account of 1860 it was ‘not older than the 15th century, and probably replaced an earlier building’ (Jones, 1860, 317), an interpretation repeated in 1872 when it was, however, regarded as ‘not a very ancient building, its architectural features being 15th century’ (Brash, 1872, 249). Cadw, 1994, 3, features an unsourced mention of a rebuild in 1812, but no further evidence for this has been encouintered.

However, the Faculty submission for the rebuilding is accompanied by a plan and elevation drawing (NLW, SD/F/55) that appear to contradict the above statements. The church, which in 1886 comprised just the chancel and nave, was lit by windows which were all 2-centred openings, without dressings, and standard for the earlier 19th century; the nave had 2 in its south wall, both with timber-framed 9-pane glazing, while the third window, in the chancel east wall, featured Y-tracery in timber, similarly early 19th century in style. There is no suggestion of blocked openings, but they may have been omitted. The gabled bellcote and western buttress are depicted as those in the present church (and indeed the plan suggests that the latter at least was retained, see above); however, the buttress is a structure unique in the region, the mouldings a strange amalgam of Gothic and Classical influences, strongly suggesting that it may not be a medieval feature at all. The entrance was to the north as at present. Seating comprised 11 box pews in the nave.

The present church was Grade II* listed in 1998.

An ECM, the ‘Nettesagrus Stone’  (Dyfed PRN 1174; SAM Pe 143),  stands in the yard immediately to the south of the church; it bears an Ogam inscription and an incised cross.

St David, Bridell, occupies a high-certainty site, and probably the location, of a pre-conquest religious site.

St David, Bridell was a parish church during the post-conquest period, in the gift of the Welsh community, of the medieval Deanery of Emlyn (Rees, 1932). The living was and is a rectory, the patrons still being the freeholders of the parish (Green, 1911, 252). As ‘Brydell’, the church had an annual value of £9 in 1536 (ibid.).

In 1786 ‘Bredellorth alias Bridell alias Bridell’ was a discharged rectory with an annual value of £32, rated in the king’s books at £9 (ibid.) – an assessment pertaining in 1833 – of the Archdeaconry of Cardigan (Lewis, 1833).

In 1998 St David, Bridell, was a parish church. The living was a vicarage, held with Cilgerran and Llantwyd (Benefice 644) in the Archdeaconry of Cardigan, Rural Deanery of Cemais and Sub-Aeron (St Davids, 1997-8).