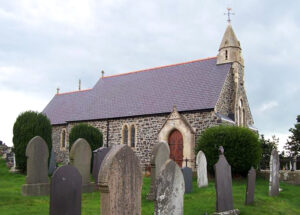 Archaeological potential – good. No external cutting or drain; suspended floors in 60% of church; below-ground drainage beneath 10% of church.

St David, Henfynyw, is a 2-celled church, of small size. It was entirely (re)built in the (earlier?) 19th century on the same site, and in the same location as its predecessor, but nothing was retained from the earlier fabric.

The present church consists of a 2-bayed chancel, a 3-bayed nave, a single-bayed transeptal vestry south of the chancel west bay, and a WC block between the vestry and the nave south wall. Construction is in squared local rubble throughout; external pointing from 1991, plastered within. Openings, except in the WC, are from 1861 and neogothic, with yellow oolite dressings; the church is entered through a doorway in the nave north wall. There is a western bell-turret with 4 openings and a low oolite spire, from 1861, and reached by a doorway in the west end of the nave. The roofs are slated gables; the WC block has a slated lean-to roof.

The church was described in 1833 as ‘a neat plain edifice, consisting only of a nave and chancel’ (Lewis, 1833). The present church displays no pre-19th century fabric and appears to have been rebuilt during the 19th century, possibly after 1833. It was restored in 1861 (Anon., 1897, 166). The restoration appears to have amounted to a partial rebuild, and although the pre-1861 church is shown as possessing the present plan and dimensions on the tithe map of 1846 (NLW, Henfynyw, 1846), and had a north doorway like the present structure (Westwood, 1880, 299), it is apparent that it was at least refaced and that all openings were rebuilt; the church was reroofed and refloored, while the vestry and bell-turret are probably also additions of this date. The WC block was added in the early-mid 20th century. The church was renovated in 1991 (Hook Mason, 1994, 3) when it received new finishes.

The limestone font, from c.1200, has a square, deeply chamfered bowl with a band of incised rosette mouldings, almost identical to that at Betws Bledrws, Cer., and similar to that at Llansantffraed, Cer. (Anon., 1914, 15).

There is a neither an external cutting nor a drain. Floors are suspended in the nave and vestry. There is below-ground drainage beneath, and adjacent to the WC. No external memorials lie significantly close to the church.

St David, Henfynyw, was not a parish church during the medieval period (Rees, 1932), but a chapelry of the medieval Deanery of Ultra-Aeron, in the possession of the Precentor and Chapter of St Davids Cathedral (Lewis, 1833).

Hefynyw was a parish by 1833 when the living, a perpetual curacy in the patronage of the Precentor and Chapter who received the tithes and paid the minister’s stipend, was endowed with £800 royal bounty and £1000 parliamentary grant (ibid.).

In 1998 St David, Henfynyw, was a parish church. The living was a vicarage, held with Aberaeron and Llanddewi Aberarth (Benefice no. 574) in the Archdeaconry of Cardigan, Rural Deanery of Glyn Aeron (St Davids, 1997-8).

Henfynyw (‘old Menevia’) is the putative site of an early foundation of the Bishops of St Davids.