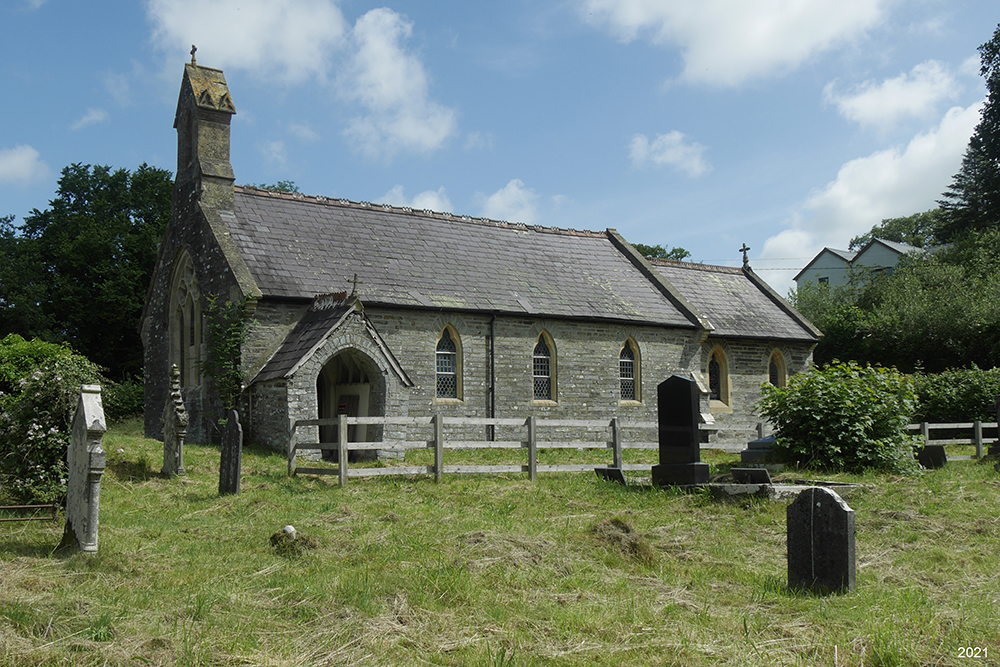 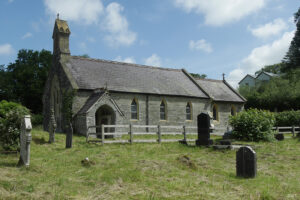 Archaeological potential – good. No physical evidence for earlier church; no external cutting or drain; suspended floors over a void 70% of church.

St David, Henllan, is a 3-celled church, of small size. It was rebuilt in the earlier 19th century (in 1826?) on the same site, and in the same location as its predecessor, but nothing was retained from the earlier fabric. The south porch is from the mid 19th century, and the chancel and vestry were added in 1881.

The present church consists of a 2-bayed chancel, a 4-bayed nave, a south porch, and a single-bayed vestry north of the chancel west bay flanked by 2 lean-to tin sheds from the mid-late 20th century. Construction is in local slate rubble throughout. The nave north wall retains its earlier 19th century external render, the remainder has pointing from 1881; plastered within. The nave north wall displays 2 neo-gothic, single light windows from the earlier 19th century, with timber frames. The remainder of the openings were built, or rebuilt, in 1881 and are neo-gothic, with grey oolite dressings; the windows are mainly cusped single lancets but the east and west windows have 3 lights with Geometric tracery. There is limited external buttressing, from 1881. The west end carries a simple, gabled, shouldered bellcote rebuilt in 1881. The roofs are slated gables; the vestry has a slated lean-to roof and the lean-to sheds are tin-sheeted throughout. Floors are suspended in the nave and vestry.

The form of the pre-19th century church is not known. It was entirely (re)built in the earlier 19th century, possibly in 1826 (Clive-Powell, 1996, 1). As rebuilt, the church comprised just the present nave, and was described by Lewis, 1833, as ‘ a very small edifice, not characterised by any remarkable architectural feature’.

The south porch was added after 1844 (NLW, Henllan, Tithe Map, 1844). Drawings accompanying the faculty submission for the 1881 alteration (NLW, SD/F/98) show the church as it then existed. It comprised a 4-bayed chancel/nave (the present nave), with 2 windows in the north wall and 3 in the south wall; all were simple neo-gothic single lights with timber ‘Y’-tracery. There was no east window (?). The present south porch and south door are shown, and a north door into the chancel. A simple, gabled single bellcote lay over the west end.

The chancel and vestry were added in 1881 (ibid.), to the designs of the architects Middleton & Sons, of Westminster and Cheltenham. The extent of the work was much greater than the faculty suggests and amounted to a partial rebuild. The old east wall was taken down and a chancel arch erected in its place. A window was substituted for the former north door, in a rebuilt area of walling, and the south wall windows and doors were partly rebuilt. The bellcote was rebuilt. The nave south and west walls were entirely refaced, and the west window was inserted. The church was reroofed, refloored, reseated and replastered.

The only major subsequent alteration has been the erection of the lean-to tin sheds either side of the vestry, in the mid-late 20th century.

There is no physical evidence for the earlier church. Neither an external cutting nor drain is present. Floors are suspended over a void in the nave and vestry. No external memorials lie significantly close to the church.

St David, Henllan, was not a parish church during the post-conquest period (Rees, 1932), but a chapelry of the medieval Deanery of Sub-Aeron. It appears to have been a possession of the Bishops of St Davids from an early date.

Henllan was a parish by 1833 the living was a discharged rectory annexed to that of Bangor Teifi, in the patronage of the Bishop (Lewis, 1833).

In 1998 St David, Henllan, was a parish church. The living was a rectory, held with Bangor Teifi, Llanfair Orllwyn and Llangynllo (Benefice 693) in the Archdeaconry of Cardigan, Rural Deanery of Emlyn (St Davids, 1997-8).

There is the suggestion that the original dedication may not have been to St David (Various, 1994, 390)