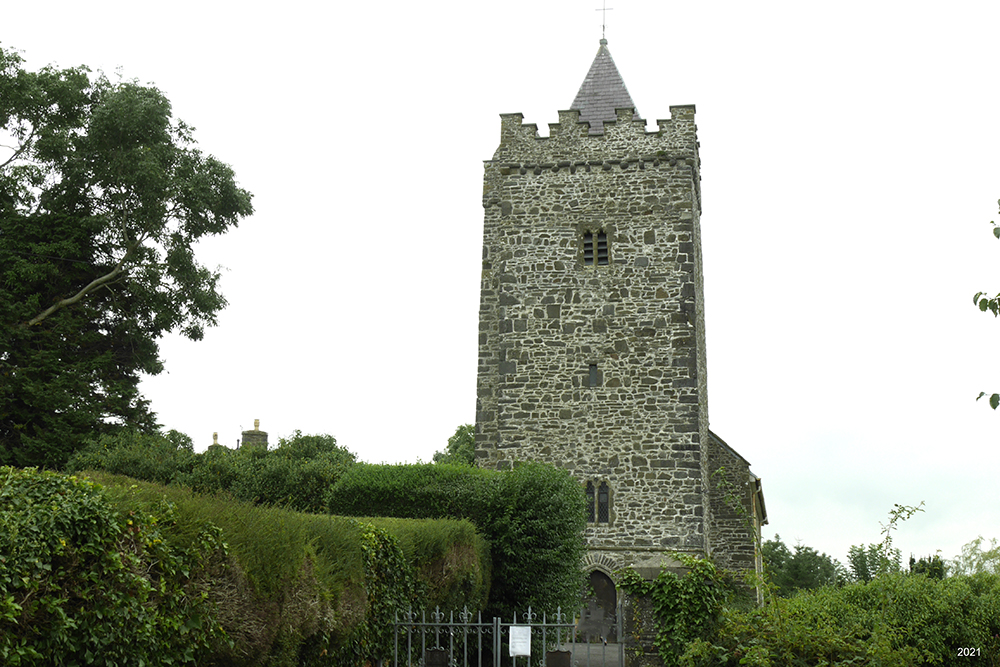 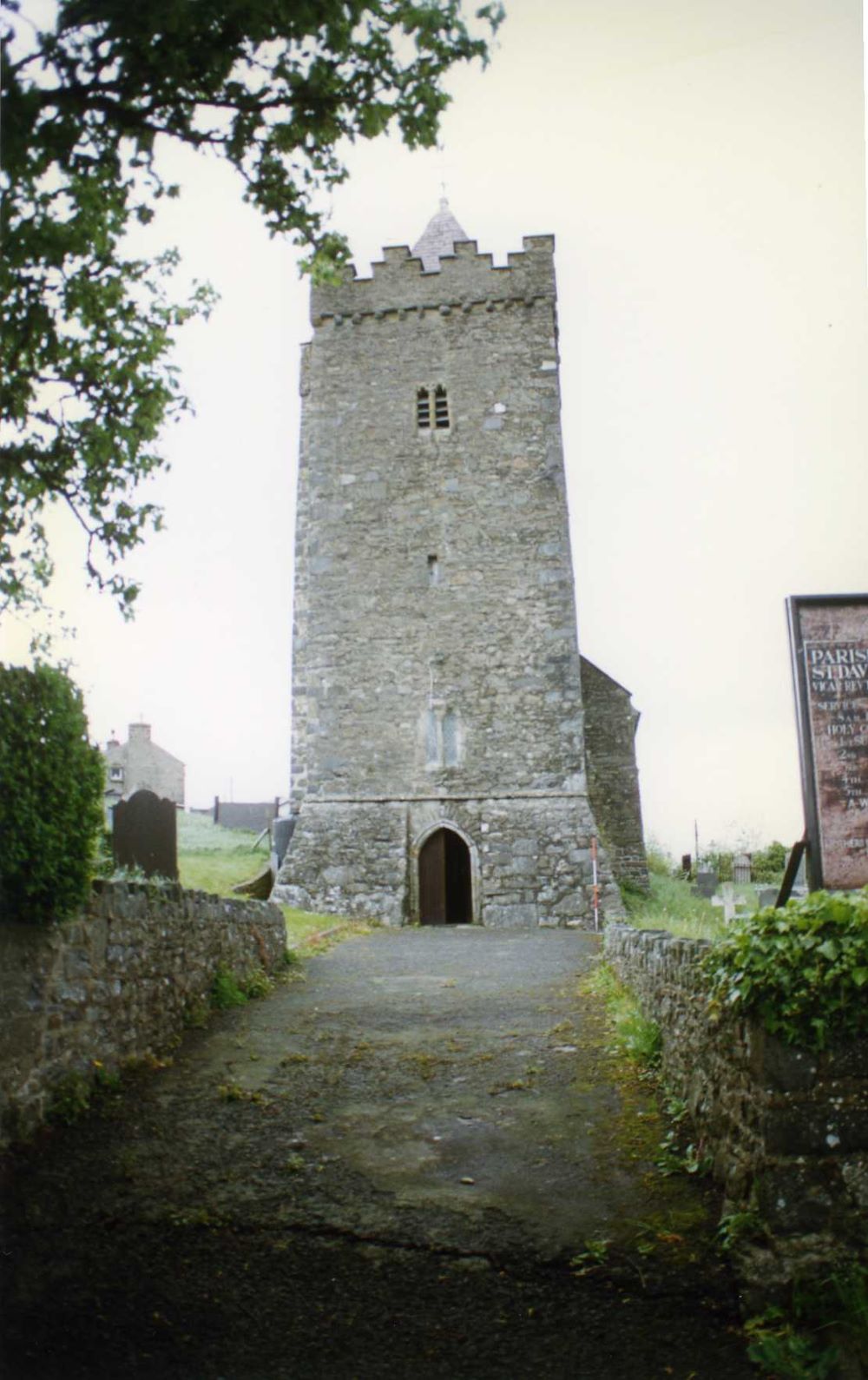 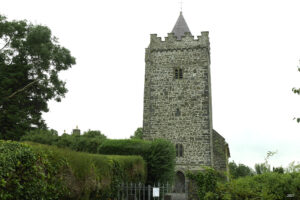 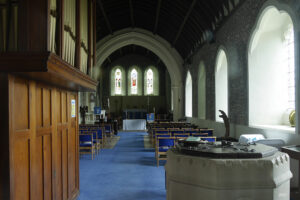 Archaeological potential – good-very good. Yard truncated around 50%  of church; very deep, narrow drain around 40% of church; floor levels raised; suspended floors with void in 60% of church, with underground heating chamber; boilerhouse below 10% of church; external memorials close to 10% of church.

The present church consists of a 2-bayed chancel, a long, 5-bayed nave, a 3-storey west tower and a single-bayed vestry north of the chancel, from 1871. Construction is in limestone rubble throughout. The external pointing is generally good and is later 20th century; internal plaster is confined to the west tower ground floor and a low dado elsewhere. Roofs are slated gables; the vestry has a slated lean-to roof while the west tower roof is pyramidal, and also slated.

The chancel east window is of 3 lancets, from 1871. A recess in the north wall now has a cusped head from 1871 but may originally have been an Easter sepulchre (Bevan, 1926, 65). The blocked arcade into a former north chapel, its head now gone, can be seen internally, pierced by a door into the present vestry from 1871. A blocked south door, with a low head, may be medieval, its head is interrupted by a 2-light window from 1871. The moulded chancel arch is also from 1871. The softwood roof is from 1871; all rafters have queen-posts.  The glazed-tile floor is also from 1871.

There are 5 single-light windows in the nave north wall, and the five windows in the south wall are both single- and 2-light; all are from 1871. The south wall windows partly interrupt earlier blocked windows (which were ‘modern’ in 1859 – see below). The roof is similar to that in the chancel and from 1871. The passages are tiled, with suspended board floors; there is a chamber for a former Porritt’s heating apparatus.

The west tower is from the late 15th century and comprises 3 storeys. A square spiral stair turret projects from the north-east corner, entered through a 15th century doorway and lit by simple square slits of similar date. There is a very pronounced external batter up to a string-course at first floor level. The plain 2-centred arch into the nave is 15th century, but the west door was rebuilt with a moulded surround in 1871; there is a cusped, 2-light window above from the 15th century. The barrel-vault is 15th century; the ground floor interior is plastered and is floored as the nave passages. A blocked, segmental-headed opening formerly led from the first floor into the nave roof space; simple square slits pierce the other 3 walls. The belfry stage has a 2-light, cusped opening in each wall, all apparently 15th century but partly rebuilt? The crenellated parapet lies on a corbel table and features crow-stepped merlons, of 15th century date.

The vestry lies north of the chancel and was added in 1871. It has cusped 2-light windows in the east and west walls, and a lean-to roof. Five steps lead down the north wall to a doorway into the boilerhouse below.

Much yard build-up was removed from against the north wall in 1871, and a very deep, narrow drain was excavated here. It is wider around the vestry, with a flagged covering. There is no cutting or drain around the remainder of the church. Floor levels appear to have been raised throughout. The flooring is suspended in the nave and vestry. There is a boilerhouse below the vestry and an underground heating chamber in the nave; no evidence for any further below-ground crypt/vault. External memorials lie close to the east wall.

The chancel and nave are medieval, but cannot be closely dated; they may have been substantially rebuilt in the earlier 19th century. The tower is late 15th century. There was a north chapel on the site of the present vestry, medieval?.

The church was described in 1859 as of ‘higher pretension than most of its neighbours, yet very rude’ (Glynne, 1898, 351). A ‘shallow chapel’ lay north of the chancel; in the plan of the existing church that accompanied the Faculty of 1871 (NLW, SD/F/233) this is shown as a narrow cell with a wide arch into the chancel and seating; it was termed the ‘Cross Chapel’ in 1773 (Bevan, 1926, 64). The chancel arch was full-width, without stops, and ‘plain’. The north wall had two windows, a square-headed light in the chancel (not shown on the Faculty plan) and a trefoil-headed lancet in the nave. The single-light east window, and the four similar windows in the nave south wall, had been ‘modernised’ and appear to have had timber frames. There was a doorway in the chancel south wall. The tower arch and west door were plain and pointed, and the stepped crenellations were already present. The interior was described as ‘dreary and dark’; the roof was of ‘plain open timbers’, apparently comprising 13 principal rafters (Crossley and Ridgeway, 1946, 50).

Much churchyard build-up had occurred along the north side, and its removal was one of the priorities of the restoration of 1871 (NLW, SD/F/233) carried out to the specification of R. J. Withers, Architect, of London at an estimated cost of £1109. The restoration was medium-high impact. The church was entirely refenestrated (except the tower), reroofed and refloored; floors were raised and a Porritt’s heating apparatus installed in the nave. The west door was rebuilt, and the chancel south door was blocked. The north chapel was removed and a new vestry built

The oolite font is from 1871 and has an octagonal bowl, stem and base (Evans, 1913, 19). The original font lies in the tower ground floor; it has a square bowl with sides sloping sharply inwards, without a stem and on a low base comprising four moulded lions, and is of 12th century date. Similar fonts are, or were present at Llanina and Hefynyw.

There is in incised cross in the tower ground floor, which also displays an ogam script (Anon, 1863, 263).

In 1833 the living was a vicarage with the perpetual curacy of Llanina annexed, in the Archdeaconry of Cardigan, and was rated in the king’s books at £4 18s 1½d (Lewis, 1833).

In 1998 St David, Llanarth, was a parish church. The living was a vicarage, held with Capel Cynon, Talgarreg and Gwenlli St Mark (Benefice 802) in the Archdeaconry of Cardigan, Rural Deanery of Glyn Aeron (St Davids, 1997-8).