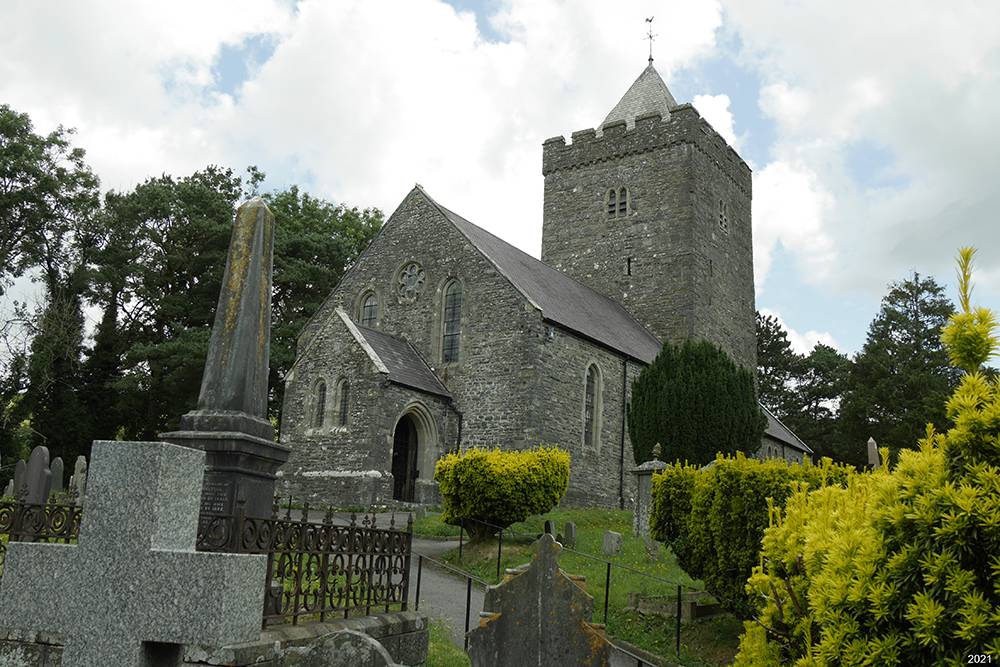 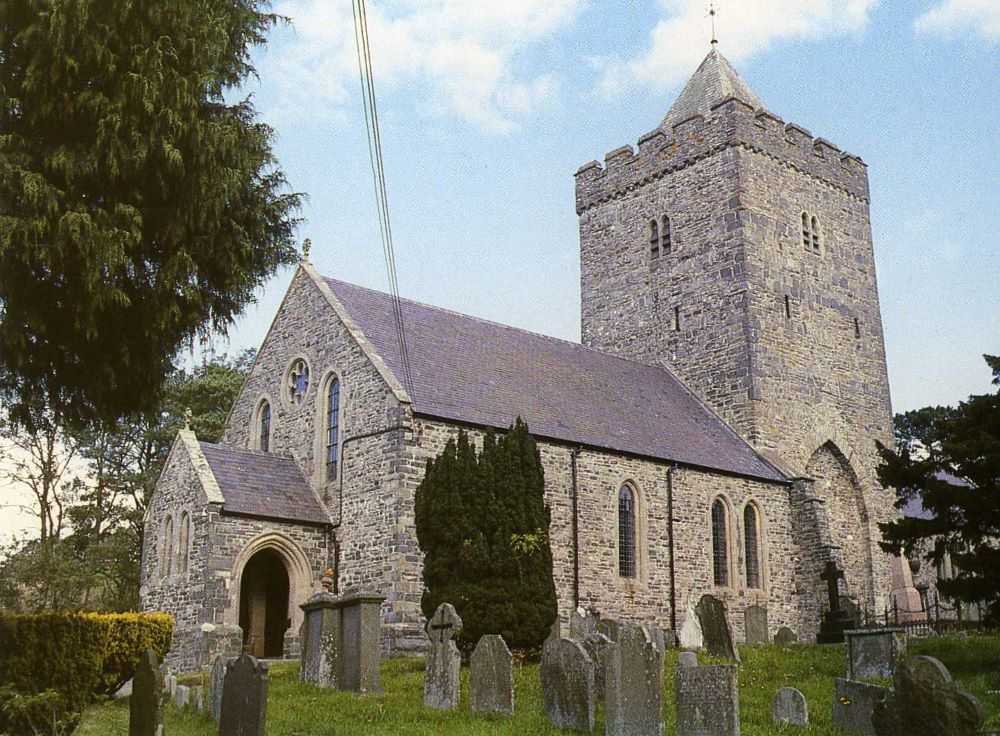 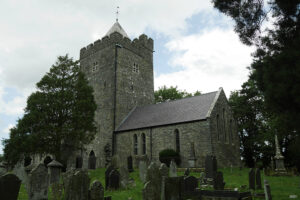 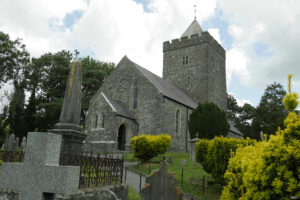 Reason for Listing: Listed II* for one of the finest medieval church towers in Cardiganshire.

The present church consists of a 2-bayed chancel, a 3-storeyed central tower lying at the crossing with former north and south transepts, a 3-bayed nave, a west porch and a below-ground boilerhouse north of the porch; a south aisle was formerly present. Construction is in Llanddewi Brefi rubble throughout; dressings are in yellow oolite and grey sandstone. The external pointing is from c.1913; the interior is plastered. Roofs are slated gables; the tower has a slated pyramidal roof.

The chancel is inclined to the south. Its side walls retain some medieval masonry but were largely rebuilt in 1833-4; the lower half of the east wall is from 1833-4, while the upper half is a rebuild from 1885-6. The triple lancet east window is uncusped, from 1885-6, while in the south wall is a similar single-lancet, and a double-lancet, from the same date. The sill and jamb of a blocked ?medieval window are visible in the north wall, and, to the west, the outline of a possible blocked door. The softwood chancel roof is from 1885 and is without trusses, all rafters having collars, arch-braced from wall corbels, queen-posts and a crown-plate. The tiled floor is from 1885, when it was raised.

The crossing is represented by the central tower ground floor. It communicates with the chancel and nave through plain, 2-centred arches, from the 13th-14th century. The side walls have similar, but blocked arches to the former north and south transepts, blocked c.1800; the corework of the former transept west walls can be seen externally, the stumps of their east walls having been converted into buttresses in 1874. The north transept arch blocking is pierced by a 2-centred window opening with a 2-light timber frame, all from 1833-4, while the southern blocking has a similar inserted door. Medieval roof creasing can be seen externally above the east, north and south arches. The crossing has a semicircular barrel vault with 6 bellrope ports, from the 15th century when the tower was built, and a flagged floor from 1874, re-using earlier flags?.

The tower rises above the crossing and contains 2 more storeys reached via a square stair turret at the north-east corner; the turret is lit by simple slit-lights and entered through a doorway from the 15th century; internally there are 2 levels of corbelling for a rood-loft and stair. The second storey is lit by simple loops, from the 15th century, and has decorative banded masonry including some herringbone-work while in the south wall is an area of blocking beneath a segmental head, a former doorway?. The third storey features 2-light openings, largely rebuilt in the 19th century, in all four walls; the crenellated parapet lies on an external corbel table and occupies a higher level over the stair turret.

The nave was rebuilt in 1833-4 and again in 1885-6. There is an external basal offset, and a string-course at a higher level, from 1874; the scars of buttresses from 1833-4 can be seen at the west ends of the north and south walls. There are 3 windows in each side wall, single- and double-lancets like those in the chancel, from 1874; the 2 similar single lancets in the west wall, the moulded west door and the central rose window, are also from 1874. The softwood roof is like that in the chancel, from 1874. The passages are flagged as the crossing, over a void, with suspended woodblock flooring, all 1874.

The west porch is from 1874 and has an external offset like the nave. It is entered through a contemporary doorway, with a moulded surround, in its south wall. There are 2 lancets, as those in the rest of the church, in the west wall, from 1874. The softwood gabled roof is without trusses, all rafters having arch-braced collars and a crown-plate, matchboarded above, all from 1874. The tiled floor is from 1874 and laid directly on the substrate. A below-ground boilerhouse, with rubble walls, a flat concrete roof at ground level and entered through a plain doorway from a flight of steps along its north wall, was built against the porch north wall in the earlier 20th century, in c.1913?.

The church stands upon a possible bronze age barrow. There is an external cutting along the north wall of the chancel, and the north and south walls of the nave. Former components lay beyond the present church. The chancel floor was raised in 1885-6. The nave floor is suspended over an underfloor void. The boilerhouse is below ground level. An external family memorial lies significantly close to the chancel south wall.

The crossing, with its 4 arches, is 13th -14th century as may be the chancel. The central tower was raised over the crossing, which was vaulted accordingly, during the 15th century. The chancel was largely rebuilt in 1833-4 when the nave was entirely rebuilt; nave and chancel were again substantially rebuilt in 1874 and 1885-6 respectively. The west porch is from 1874. The boilerhouse is early 20th century, perhaps from 1913.

The medieval church was cruciform, with both north and south transepts, which with the addition of the tower was probably in conscious imitation of the monastic church at Llanbadarn Fawr, Cer. (Cf. Llanfihangel-y-Creuddyn, Cer.). The present nave may follow the same general plan as the medieval component, which however had a south aisle (Anon., 1931, 388; Lewis, 1967, 6). In 1552 there were 5 bells in the tower (Lewis, 1967, 6), when the church was described as ‘rude’ (Anon, 1911, 18).

The nave was again largely rebuilt in 1874 for £1100, to the designs of the architect R. J. Withers (Lewis, 1967, 6). The chancel was used as a Sunday School until 1885 (Anon., 1878, 353), when it was partly rebuilt, similarly under Withers (NLW, SD/F/301). It was refenestrated, the 3 new windows being inserted in the old openings which were altered accordingly. The floor level was raised. It was reroofed, refloored, reseated and replastered. Stylistically, the work is similar to that in the nave.

The church was restored in c.1913. The work was largely superficial, confined to finishes and fittings, but the boilerhouse may date from this period. The church was reseated later in the 20th century.

The arcaded oolite reredos is from 1886 (Lewis, 1967, 6). The softwood stalls, the vestry screen and wainscot in the crossing, the pews and the oak pulpit are from the mid-late 20th century.

Documentary sources for the medieval church have the separate PRN 12427.

St David, Llanddewi Brefi, was a parish church during the medieval period (Rees, 1932), of the medieval Deanery of Sub-Aeron. The church was (re)established in the 12th century and is mentioned in the contemporary ‘Poem to Dewi’ by Gwynfardd Brycheiniog. It was in a possession of the Bishop of St Davids and was reorganised as a collegiate church, comprising a Precentor and 12 prebendaries, by Bishop Bek in 1287 (Lewis, 1967, 6).

The patronage had found its way into private possession by 1833 when the living, a perpetual curacy of the Archdeaconry of Cardigan, was endowed with £800 royal bounty (Lewis, 1833); the patrons were the Earl of Lisburne and R. Price Esq.

In 1998 St David, Llanddewi Brefi, was a parish church. The living was a vicarage held with Cellan, Llanbadarn Odwyn, Llanfair Clydogau and Llangybi (Benefice no. 820) in the Archdeaconry of Cardigan, Rural Deanery of Lampeter and Ultra-Aeron (St Davids, 1997-8).

There is a strong historic tradition relating the site of Llanddewi Brefi church to the preaching of St David.

Anon., 1914, ‘Restoration at Llanddewi Brefi’, Transactions of the Cardiganshire Antiquarian Society Vol. I.