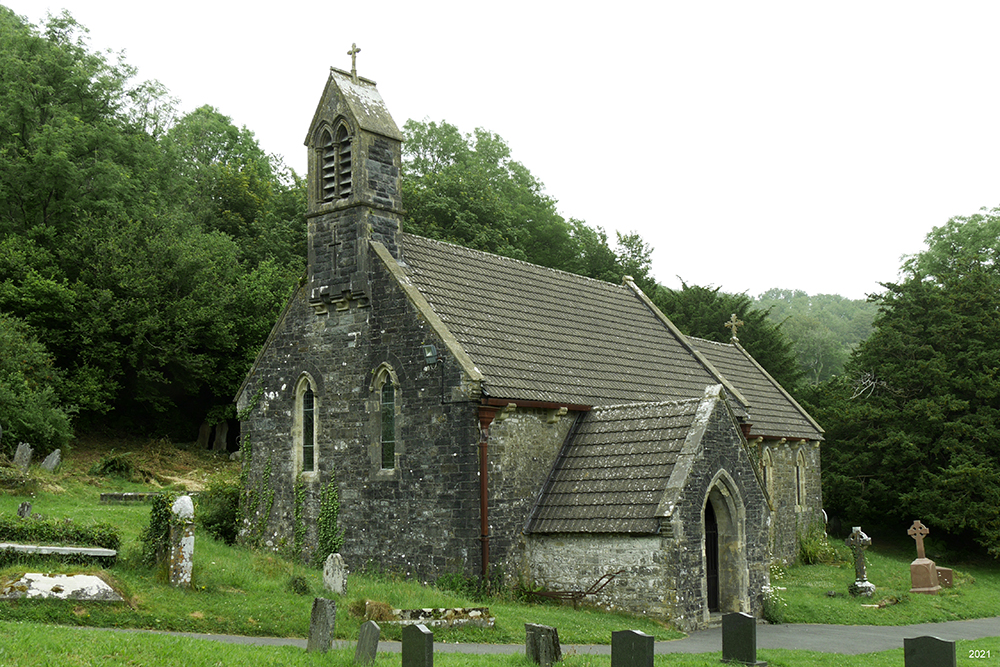 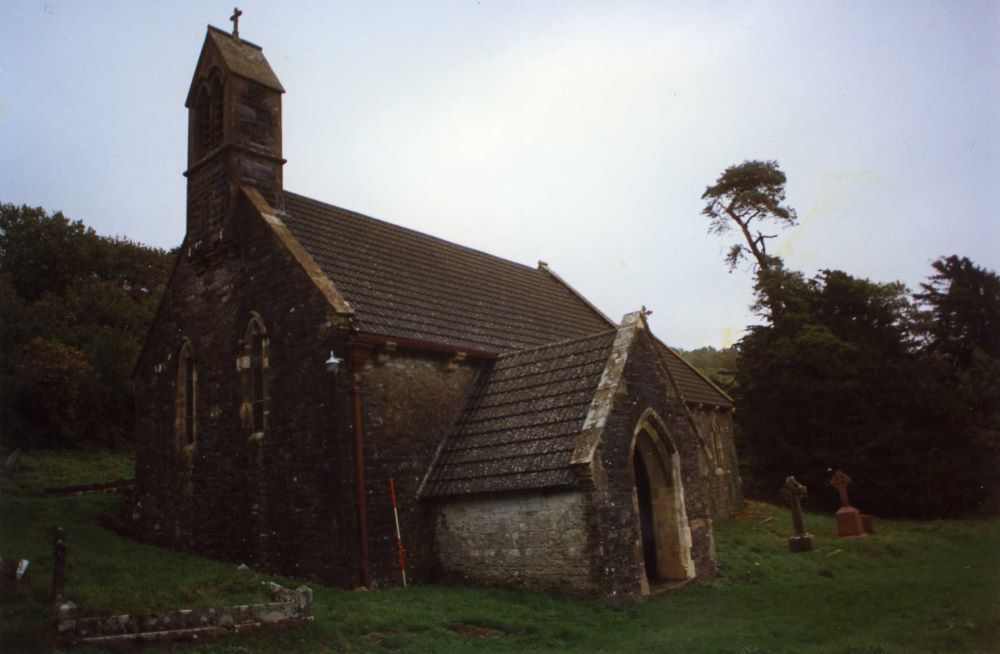 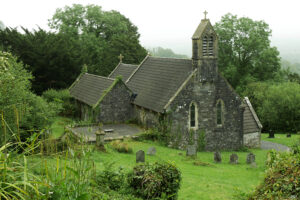 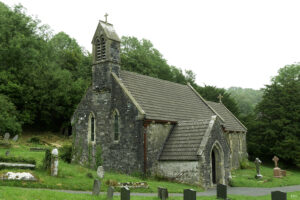 Reasons for Listing: Listed as a church retaining its mediaeval form and much of its early fabric.

The present church consists of a 2-bayed chancel, a 3-bayed nave, a 3-bayed north chapel incorporating an earlier north transept, and a south porch. Construction is in limestone rubble. The chancel arch and north chapel arcade are medieval, and there are blocked medieval doors in the nave. Other openings are mainly from 1861, neo-gothic, with yellow oolite dressings. The double western bellcote is from 1893; there was formerly a ?medieval western bell turret. Pointing is from 1861 and 1893; there is no internal plaster. Roofs are gables throughout, with later 20th century synthetic tiles.

The external walls of the chancel have been much rebuilt. The 3-light east window is from 1861 and has cusped, Geometric tracery. The south wall is pierced by 2 cusped, single lancets also from 1861. Externally, this wall exhibits a basal plinth in the west half, medieval?. The fairly large, 2-centred chancel arch is slightly asymmetrical, has chamfered stops and is medieval, 14th century?; on the east face the creasing for the former, lower-pitched chancel roof can be seen. The present roof is softwood, from 1861 and has collar-rafter trusses arch-braced from wall corbels, matchboarded above; the eaves are corbelled externally, 1861. The tiled floor is also from 1861, with woodblock flooring from 1893.

The nave is lit by cusped single and double lancets in the south wall, from 1861, and a similar single lancet in the north wall added in 1893. The west wall was entirely rebuilt in 1893 with an elaborate gabled double bellcote, projecting from an external corbel table, with a string-course and 2-centred louvered openings; the wall below is pierced by 2 cusped single lancets, 1893. Internally,  the north wall contains the blocked semicircular-headed entrance to an 18th – early 19th century external burial vault, now replaced by a simple square opening; it interrupts the earlier blocking of a ?medieval north door. An adjacent area of blocking, truncated by the 1893 window, may represent the doorway to the stair for a former north porch parvis. The nave is roofed like the chancel, from 1861. The passages are flagged, like the woodblock flooring from 1861.

The north chapel communicates with the chancel through a 2-bayed arcade of  depressed, 4-centred arches in cavetto-moulded oolite ashlar, on a cylindrical pier with a cable-moulded impost, featuring 2 moulded grotesque masks in the spandrel; all is from c.1500 but re-using earlier mouldings?. The chapel originally stood higher than the chancel and the south face of this wall was raised in 1861; the junction is visible. The single arch into the nave is like the chancel arch, 14th century and originally leading to a north transept; there is a joint to the nave north wall showing the arch to have been a secondary insertion. The chapel is lit by a 2-light window in the east wall, like the chancel east window and also from 1861, and 2 double lancets in the north wall like the nave, also 1861. The west wall contains a area of blocking at its junction with the nave, of unknown purpose, and appears to have formerly extended north of the present north wall (transept originally longer?), now finished as a buttress. The north wall exhibits the external scar of a former lean-to shed, early 20th century?. The softwood roof is from 1861, lacks trusses and all common rafters are scissors-braced and matchboarded above. Floored as the chancel; the west bay is screened off as a vestry, with a suspended woodblock floor.

The south porch doorway has a 2-centred, chamfered surround from 1861. The porch has a softwood roof, without trusses, all common rafters having collars, from 1861. The floor is flagged directly onto the substrate, also from 1861.

A deep, revetted external cutting runs around the northern half of the church, primary, extended when external burial vaults were excavated against the nave and chapel north walls in the 18th – early 19th centuries. There may be below-ground evidence for a west porch, a north porch and a longer north transept beyond the present church; however, the external burial vaults will have removed much of this evidence.  A shallow external drain runs around the southern half of the church. There is no evidence for any internal level changes. The floors may not be suspended over any void.

The nave may be 13th century, but now lacks detail. The chancel south wall butts against the nave east wall and the form of the chancel arch dates its addition to the 14th century. The north chapel west bay was initially a north transept, with an arch, similar to the chancel arch, which can be seen to be an insertion of the 14th century; the transept was originally longer, having been truncated when absorbed into the north chapel. The south porch lacks detail but may be 14th or 15th century in origin; a north porch may have been present, and may have featured a first floor parvis chamber. The north chapel is from c.1500, but its arcade may re-use earlier detail.

The church has been subject to a number of restorations (Canon G. Morris, Rural Dean, pers. comm.). The first recorded was in 1715-37, but its extent is unknown. A second restoration occurred in 1756-7 when the chancel was apparently rebuilt (recorded on a datestone on the east end). In a third restoration of the early 19th century a west door was inserted and a west porch added. A drawing from this period, from the south-west, shows the chancel, nave and south porch; there was a crenellated western bell-turret, medieval? (similar to the turret at East Williamston, from c.1500), and the nave south wall was pieced by a square, domestic 12-pane window (Thomas Lloyd, private collection).

A major restoration occurred in 1861 (Canon G. Morris, Rural Dean, pers. comm.) when the church was largely refaced. All windows and doors were rebuilt, and the church was reroofed, refloored, and reseated. The chancel was heightened. The west porch was removed and the west door was blocked.

In 1893 the church was restored to the designs of the architect George Halliday (NLW, SD/F/304). The crenellated bell-turret was removed and rebuilt in its present form, along with the nave west wall. A window was inserted in the nave north wall. Some of the woodblock flooring, and fittings, were replaced.

The font has a plain square bowl, not closely dateable, and a 19th century stem and base.

St David, Llanddewi Velfrey, was a parish church during the post-conquest period (Rees, 1932), of the medieval Deanery of Carmarthen. The church was in the patronage of the Lord of the Manor of Velfrey (Narberth). In 1291 it was assessed at £8 (Green, 1912, 232). There were 2 former subordinate chapels within the parish (ibid.).

In 1833 the living comprised both a rectory and a vicarage. The sinecure rectory was in the patronage of the Principal and Tutors of St Davids College, Lampeter and rated in the king’s books at £8 (Lewis, 1833), while the discharged vicarage was in crown patronage and rated at £7 9s 4½d (ibid.). The tithes were divided equally between the rector and the vicar.

In 1998 St David, Llanddewi Velfrey, was a parish church. The living was a vicarage, held with Lampeter Velfrey (Benefice 630) in the Archdeaconry of Carmarthen, Rural Deanery of St Clears (St Davids, 1997-8).